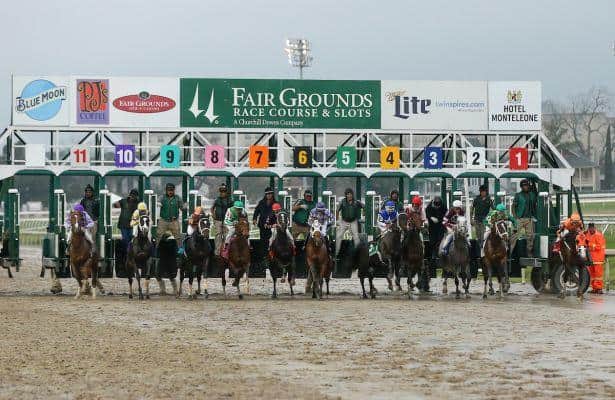 Fair Grounds offers the best card in North America on Saturday with six different stakes races, including the Grade 3, $150,000 Louisiana Stakes and Grade 3, $200,000 Lecomte Stakes. The latter race offers important points for the Kentucky Derby, while the former brings together Mandaloun and Midnight Bourbon, two stars from the 2021 season.

Here are selections for the late pick 4, and also an early double covering an interesting 3-year-old maiden race and optional claiming race.

In his first start for trainer Brad Cox, Gunfighter ran a flat seventh in a Nov. 28 maiden race at Churchill Downs. He deserves another shot though.

Gunfighter faced good horses in that race. The winner Surfer Dude went on to finish third in the Gun Runner Stakes in his next start, which is an official Derby points race. Also, the runner-up Kupuna and fourth-place Call Me Jamal both broke their maidens next time.

Gunfighter is the choice.

Stellar Tap impressed many watchers with a strong maiden win at Saratoga last summer. With that race in mind, it was disappointing to see him run a tiring fifth in the Iroquois Stakes (G2) and seventh in the Breeders’ Futurity (G1). Stellar Tap took a short break afterwards.

Considering his impressive Saratoga maiden win, Stellar Tap deserves one more shot from bettors. Pedigree-wise, there is no reason he cannot handle one and one-sixteenth miles as a son of Tapit out of the Medaglia d’Oro mare Gioia Stella. Gioia Stella competed as a turf router in her 11-race career and two of her three career wins came at this distance.

In this race, Stellar Tap gets a break by dropping into an optional claimer. His receives Lasix for the first time and his speed is likely to come in handy.

Expect a strong performance from this promising colt.

La Crete broke her maiden in gate-to-wire fashion on Nov. 20 at Churchill Downs by converting an uncontested lead into a 2 1/4-length win.

In this spot, La Crete is supposed to secure an easy lead again. She is the top selection, but the step up from a maiden race to a stakes race remains a concern. Five fillies from her maiden win already ran again, and all five lost.

Sweet as Pie brings stakes experience as the fourth-place finisher in the Tempted Stakes at Belmont. She also shows a blueblood pedigree. Her third dam Better Than Honour was once the best broodmare in North America if not the world.

Fannie and Freddie ran second by a neck in the local Untapable Stakes.

This turf race is a tough one, but it also brings the opportunity to catch a value price.

Two Emmys brings class as the final Mr. D Stakes (G1) winner in the last meet at Arlington Park. He also ran second by a neck in the Sycamore Stakes (G3) at Keeneland in October before going on the shelf afterwards.

Given Two Emmys is running off a three-month break while cutting back in distance, it makes sense to spread wide in case he misfires.

Halo Again, Own Agenda, Major Fed, Monarchs Glen, Bodecream, Forty Under all get spots on the pick 4 ticket as well. To write an explanation for each one of them would take up more time than it is worth though.

At first glance, this race might seem like a match race between Mandaloun and Midnight Bourbon, two familiar runners from the Derby Trail and Triple Crown series last year. Mandaloun was runner-up to Medina Spirit in the Kentucky Derby, while Midnight Bourbon ran sixth in the Derby before a strong runner-up finish in the Preakness Stakes.

The problem with Mandaloun is that he enters off a 189-day layoff. His last race came in the Haskell Stakes (G1) back in July, which he won by disqualification when Hot Rod Charlie interfered with Midnight Bourbon.

As for Midnight Bourbon, he hates winning. Despite his consistency in hitting the board, his only win last year came in the Lecomte Stakes (G3).

Despite their flaws, either Mandaloun and Midnight Bourbon could win in this spot, but it does not hurt to throw in one or two more horses in the ticket.

Sprawl shows an impressive 5-4-0-1 record at one and one-sixteenth miles. Cross out the flop in the Lukas Classic (G3) and he is consistently on the board. He also owns some useful tactical speed in a race lacking speed.

Warrant brings a consistent 7-3-3-1 record. As a 3-year-old, he won races such as the Oklahoma Derby (G3) and Texas Derby last year. Maybe Warrant moves forward now as a 4-year-old.

His main pace opponent in the Lecomte is Surfer Dude again, and Epicenter already contested the lead with Surfer Dude and put him away without a problem in a Nov. 13 Churchill Downs maiden race and Gun Runner Stakes.

Epicenter also owns the second-highest TimeformUS Speed Figure at 109. The highest number is Pappacap’s 110 from his runner-up finish in the Breeders’ Cup Juvenile, but there is no real difference in one point.

Pappacap is also likely to settle into a stalking position, and he might find Epicenter gone in the stretch before he is able to mount a rally.

Epicenter is the top selection and a single candidate.

For value underneath in the exacta, think about using Surfer Dude or Cyberknife. Surfer Dude’s early speed might last longer on this course, and he is due to move forward, especially with all the stamina influences in his blood. Cyberknife only broke his maiden locally in his last start, but the talent is there and he figures to take up a stalking position not too far from Surfer Dude. He might outrun Pappacap for second.