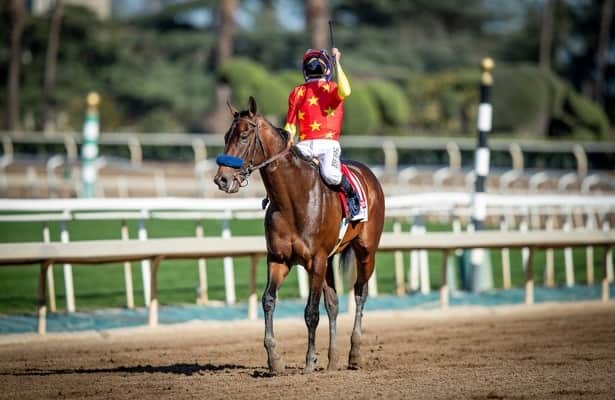 Besides the great stakes action at Parx Racing, there are also important stakes races on Saturday at Belmont Park and Churchill Downs to cover.

Here are selections below for the five races at Belmont and Churchill.

Back in March, Life Is Good won the San Felipe Stakes (G2) by eight lengths over Medina Spirit with a 130 on TimeformUS. Months later in August, Life Is Good made his return and finished second by a neck to Jackie’s Warrior in the H. Allen Jerkens Memorial (G1) with an impressive 135 on TimeformUS.

Exacta players might want to use Informative in second.

Cross out Informative’s clunker in the Charles Town Classic (G2). The track over there is a bullring and not every horse handles such a configuration.

Before the Charles Town race, Informative had shown decent form with a fifth by 9 ¼ lengths in the Suburban Stakes (G2) won by Max Player, who came back to win the Jockey Club Gold Cup (G1) in his next start. Informative also shows a win in the Salvatore Mile (G3) over the favorite Ny Traffic. This is an improving closer who can make some noise late.

Trainer Chad Brown has this race surrounded with Pocket Square and Miss Teheran.

Pocket Square struggled in her initial attempts at stakes races on this continent. In her recent start though, she won a nine-furlong optional claimer at Saratoga by 4 ¼ lengths, which is a dominant margin on turf.

Miss Teheran shows a picture of consistency with five exacta finishes out of six starts this year. In her most recent start, she made a closing bid for second by half a length in the Miss Liberty Stakes at Monmouth. Two starts ago, she won an optional claimer at Saratoga by 3 ½ lengths.

Although Miss Teheran's lone exacta miss in 2021 came in the nine-furlong Hillsboro Stakes (G3), the same distance as this race, she only lost by one length.

For a longshot alternative to the two Brown runners, think about Made In Italy, who had a troubled trip in her recent start at Delaware.

On the far turn of the Delaware allowance race, Made In Italy had nowhere to go. Jockey Daniel Centeno tried to guide Made In Italy through the inside in the stretch run, but it did not work out and sometimes horses do not like rallying in tight spaces anyway.

With a clean trip, Made In Italy might surprise bettors.

First, cross out Shesa Mystery’s synthetic and grass starts. Both of those losing efforts are irrelevant in this seven-furlong dirt contest.

In three dirt starts, Shesa Mystery shows two wins and a second by 3 ¾ lengths in the Iowa Oaks (G3) after contesting the early pace. The significant part is that Army Wife won the race, and she went on to run third in the Alabama Stakes (G1) while only losing to Malathaat by two lengths.

The cutback to seven furlongs is not a concern, as Shesa Mystery broke her maiden at a mile and probably will not regress at one furlong less.

If Shesa Mystery fails, then one of the logical contenders such as the favorite Carribean Caper or Li’l Tootsie might get the job done.

Li’l Tootsie recently closed well for third in the Prioress Stakes (G2) at Saratoga. She only needs some pace ahead in order to fire once again.

King Fury deserves his role as the favorite.

The fifth-place finish in the Travers Stakes (G1) is forgivable, as he did not receive a good pace in front of him and the track was speed biased.

Cross out King Fury’s turf flop. Before the turf race, he ran a close second by half a length in the Ohio Derby (G3) and won the Lexington Stakes (G2) off the bench.

Even with a slow pace projected, King Fury might overpower the field on class alone.

Also consider the Brad Cox-trained Gagetown, who was third by one length in the St. Louis Derby in his most recent start.

The extra distance of this one and three-sixteenth mile dirt race is not supposed to bother Gagetown as a son of Exaggerator and half-brother to the graded stakes winning router Include Betty. He might get a nice trip settling in the inside pocket.

According to TimeformUS Pace Projector, a fast pace is brewing with horses such as Dreamer’s Disease, Shadow Matter and Irish Unity present.

Wolfie’s Dynaghost is supposed to sit a few lengths behind them on the cutback to seven furlongs. He will also travel in the clear from Post 8.

In Wolfie’s Dynaghost’s last dirt start, he won an optional claiming race at Belmont over slop by two lengths with a 120 TimeformUS Speed Figure. Does he need slop? Last November, he broke his maiden on fast dirt over future stakes winners such as the runner-up Weyburn, The Reds and Dynamic One.

Wolfie’s Dynaghost gets one more chance to prove his 120 in the Belmont optional claimer is not because of a sloppy track. He is the top selection.

Irish Unity is useful as a backup in multi-race wagers in case the fast pace fails to materialize. In his most recent start, he was second by one length in the St. Louis Derby with a competitive 114 TimeformUS Speed Figure.

Also think about Bob’s Edge, who is 2 for 2 at Churchill Downs. He broke his maiden over this course and won an optional claiming race on May 22 here.