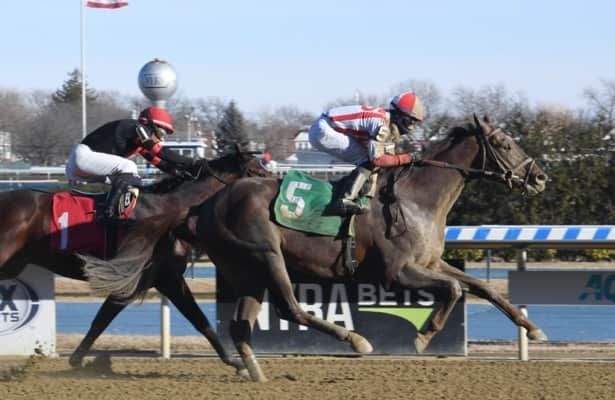 Given all the stakes races at Aqueduct, Keeneland and Santa Anita Park on Saturday, keeping up with all the action might prove tough for many bettors. As usual, the best advice is to wait for the right race or sequence.

Here are selections for the Wood Memorial Stakes (G2) at Aqueduct, Blue Grass Stakes (G2) at Keeneland and Santa Anita Derby (G1), as well as picks for one undercard stakes race at each of those tracks.

Modernist makes his second start of the year after a runner-up finish in the Challenger Stakes (G3) at Tampa Bay with a 119 TimeformUS Speed Figure.

In that Challenger Stakes, Last Judgment set the pace uncontested, which is the most advantageous trip in dirt racing. To Modernist’s credit, he went by War Stopper and Letmeno in the stretch to secure second by 1¾ lengths, while only losing by 2¼ lengths to the lone pacesetter. Keep in mind that Modernist came off a 233-day layoff in his second-place effort.

Expect Modernist to step forward. The favorite Mr. Buff is capable of hitting TimeformUS figures in the low 120s, but he normally fails in graded races.

Modernist is supposed to hit that range on TimeformUS in his second start off the bench and offers higher odds as well. After this race, he is likely moving on to bigger races.

As stated in an earlier post, Crowded Trade put in a great effort to run second in the Gotham Stakes (G3) in only his second career start and first graded stakes attempt.

He shows a 113 TimeformUS Speed Figure for the runner-up finish, which is tied with two other horses for the high TimeformUS figure. Also, Crowded Trade is a natural stalker, which puts him in an excellent position in this race behind Weyburn, Market Maven and Candy Man Rocket.

If Crowded Trade makes the next step and improves in his third start, then he will prove tough to beat.

Also include Weyburn in case the pace is slower than expected.

Weyburn went to battle with Crowded Trade down on the inside in the Gotham and eventually won by a nose after switching leads late and reclaiming the lead. For the winning effort, Weyburn displays the same 113 TimeformUS Speed Figure as Crowded Trade.

Weyburn’s second dam is Million Gift, a Sunday Silence half-sister to multiple Grade 1-winning router Sky Beauty. On paper, handling nine furlongs is not a problem for him.

In multi-race wagers, Weyburn is a logical option to use alongside Crowded Trade.

Pass the Champagne broke her maiden with a 102 TimeformUS Speed Figure at Gulfstream on Feb. 27. Yet, there is enough reason to favor her in this Grade 1.

For one, as a filly with only two starts, she is liable for more improvement. Also, she owns good speed that can put on her on the lead or right behind the pace.

Another Woman, the runner-up in the Feb. 27 maiden race, came back to break her maiden at Gulfstream on March 28 with a 96 on TimeformUS.

Pass the Champagne is also trained by George Weaver, who TimeformUS rates a 100 at Keeneland. Weaver specifically points his horses to this meet.

The other fillies are slow and lack a TimeformUS figure above 100, except for Simply Ravishing who ran a 109 and 107 on TimeformUS last fall.

Simply Ravishing’s 109 TimeformUS Speed Figure came in the Alcibiades Stakes (G1) at Keeneland when she won with an uncontested lead. The 107 on TimeformUS came in the Breeders’ Cup Juvenile Fillies, even though she ran an even fourth. But, in her fourth-place finish in the Golden Rod Stakes (G2), she went back down to a 99 figure.

Pass the Champagne offers a better price and likely needs to capture the Ashland outright in order to enter the Kentucky Oaks next month.

Essential Quality enters this race with the best class, speed figures and style. Plus, he is proven at Keeneland as a two-time Grade 1 winner last fall.

For the Southwest win, Essential Quality ran a field-high 118 on TimeformUS. None of the other entrants in this race come close.

In a Blue Grass Stakes lacking early speed, Essential Quality owns tactical speed. He might even set the pace by default with his speed.

For now, it is too hard to beat Essential Quality. If the odds drop too low, then skip the Blue Grass and tackle another race or sequence.

Soothsay broke her maiden on Feb. 26 in a six-furlong race with only a mild 93 TimeformUS Speed Figure. Yet, this closer is intriguing in the Santa Anita Oaks.

The fillies in this race are no monsters. Beautiful Gift beat Moraz by a head with a mild 104 on TimeformUS in the local Santa Ysabel Stakes (G3). Those two runners made up half the field in the Santa Ysabel, bringing into question the field quality.

Soothsay is a daughter of Distorted Humor out of the Bernardini mare Spellbound, who won the 2014 La Canada Stakes (G2). Given those route influences in her family, Soothsay is supposed to enjoy the stretch out to 1 1/16 miles in this spot.

The common notion is that short fields hurt closers. On the other hand, the lack of horses present equates to less traffic to navigate through. As long as the pace is not insanely slow, Soothsay should get a fair shot at winning.

If Soothsay is third choice or higher, she is the choice. Bettors might also want to include Beautiful Gift in multi-race wagers too, just in case.

Medina Spirit competes in his fourth Derby trail race of the season, which is rare by current standards.

The good news for Medina Spirit is that Life Is Good is on the shelf.

Medina Spirit is capable of setting the pace or stalking. With three prep races in tow, he is supposed to round into higher speed figures sooner than the others. He already shows a relatively high 120 TimeformUS Speed Figure for the San Felipe.

The fact that he had throat surgery is not a huge deal, as he shows two workouts leading into this race, with one of them a bullet March 22.

Considering Medina Spirit enters this race with the highest figure, most seasoning and versatile running style, he is supposed to beat this field.