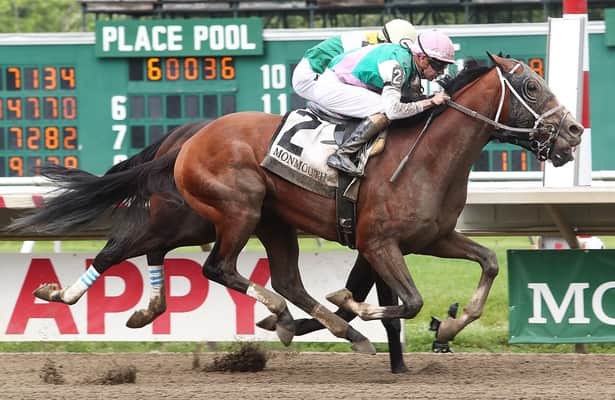 With the two graded stakes races at Saratoga difficult to play because of short fields, the focus of this “Saturday Plays” post shifts back west to Del Mar and the Grade 1, $400,000 Bing Crosby Stakes and Grade 2, $300,000 San Diego Handicap.

Here are value win bets for each race.

Shaaz broke his maiden at Santa Anita at the end of last year with closing tactics after settling in a six-and-a-half furlong sprint.

When Shaaz made his return in February at Santa Anita, he ran a close second with some trouble in an optional claiming race, before getting moved up to the win via disqualification. Two months later, Shaaz then won a one-mile optional claimer by 2 3/4 lengths in typical Baffert pacesetting fashion.

In his graded stakes debut and most recent start, Shaaz finished a good third by 1 3/4 lengths to Silver Prospector in the Sexton Mile (G3) at Lone Star Park, after initially tracking the pacesetter and runner-up Mish.

Shaaz has been training well for his Grade 1 debut by outworking Dubai World Cup winner Country Grammer multiple times leading up to this race. Look up the workouts on XBTV and watch how quiet the arms on Shaaz's exercise rider seem relative to the Country Grammer's rider.

Even though this is a six-furlong sprint, expect jockey Juan Hernandez to send for the lead on Shaaz and attempt to lead them from gate-to-wire. He only faces mild pace threats up front from Principe Carlo, Letsgetlucky and Drain the Clock, who has been on the decline since his Woody Stephen Stakes (G1) win over Jackie's Warrior last year. None of those three names are true pacesetters, although they can lead too.

Shaaz is the right choice for a win bet, at the right price.

Mandaloun came into the season as one of the top older dirt horses, if not the top name out there. The son of Into Mischief began the campaign with a bang by winning the Louisiana Stakes (G3) at Fair Grounds narrowly over Midnight Bourbon.

After throwing a clunker in the Saudi Cup though and finishing fourth in the Stephen Foster Stakes (G2), some of the early shine left Mandaloun.

Forget about the Saudi Cup effort. Some horses do not handle the grueling desert environment and the crowded field did not help matters.

The Stephen Foster line is harder to forgive since Mandaloun lost by nine lengths after stalking the pace. Consider that Olympiad gave a special performance though by enduring a fast pace and continuing on to hold off Americanrevolution and prevail with a huge 136 TimeformUS Speed Figure.

In other words, Mandaloun might break 130 if he improves in his second start off the bench. But then again, horses are not machines and do not always follow the patterns and rules attached to speed figures.

At the right price, an improvement from Mandaloun is worth betting on.