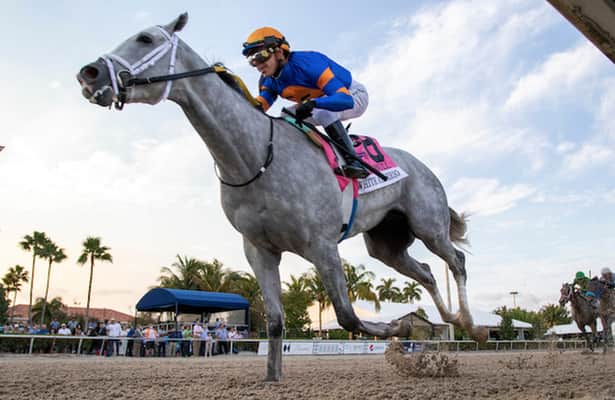 Zandon enters Saturday's Grade 1, $750,000 Cigar Mile Handicap at Aqueduct as the deserving favorite after facing the best 3-year-olds all year. But he also will be at a severe pace disadvantage on the cutback to one mile after running as a closer in nine and ten furlong races throughout his campaign.

The Cigar Mile features a moderate to slow pace with White Abarrio and Mind Control leading. It makes more sense to choose one of them.

First though, here is a double covering the Demoiselle Stakes (G2) and Remsen Stakes (G2). Afterward is the Cigar Mile selection and bet.

The problem with Julia Shining is that the oddsmaker listed her at 3-5 and she shows no advantage on speed figures. She posted a 71 Beyer Speed Figure and an 81 TimeformUS Speed Figure for the Oct. 16 maiden win.

Foggy Night shows an 86 on TimeformUS after finishing second to Good Sam in the local Tempted Stakes. Although Foggy Night’s pedigree seems questionable for nine furlongs, at least she offers 5-1 on the morning line and figures to stay around those odds given the low profile trainer Robert Reid.

The maiden Affirmative Lady ran an 84 on TimeformUS and displays an interesting “Z pattern” in her running line for the Nov. 4 Keeneland effort.

Trainer Graham Motion does not take aggressive shots like this without reason. If he feels Affirmative Lady can handle graded stakes company without owning a maiden win yet, then he must think highly of this filly.

Foggy Night and Affirmative Lady are the two choices for the double.

As stated previously on this blog, Tuskegee Airmen has won his lone two starts by clear margins while not running to his full ability yet. He is still learning.

Tuskegee Airmen broke his maiden at Parx Racing by 5 1/2 lengths and then won the Rocky Run Stakes at Delaware by 3 1/4 lengths. The latter race is interesting because Tuskegee Airmen initially did not respond to jockey Paco Lopez on the far turn, but then he came with a rush in the stretch to win.

From watching the Rocky Run, it feels like there is more to Tuskegee Airmen. He only needs to understand how to listen to his jockey better. In this spot, Luis Saez takes the call again, which is always a plus.

Tuskegee Airmen’s pedigree is excellent for nine furlongs with Street Sense on top and the Medaglia d’Oro mare Lucky Cover on the bottom. Also, Tuskegee Airmen's second dam Teammate is a daughter of A.P. Indy. This is a longer route pedigree.

Against this weak field, Tuskegee Airmen is the single.

In his most recent start, White Abarrio set a moderate pace in the Pennsylvania Derby (G1) at Parx Racing before fading in the stretch to fifth by eight lengths. Three starts ago, White Abarrio almost won the Ohio Derby (G3) at Thistledown. When Tawny Port came running on the outside though, White Abarrio had no answer and lost by one length.

Back in the spring, White Abarrio won the Florida Derby (G1) at nine furlongs, but it came against a weak field overall. Plus, the inexperienced runner-up Charge It failed to run in a straight line.

White Abarrio came across as a sharper horse when he took the Holy Bull Stakes (G2) by 4 1/2 lengths over Simplification a one mile and one-sixteenth. He also won a one-mile optional claimer last year by four lengths.

With Mind Control his only pace threat, White Abarrio can either go for the lead and take the mild pressure or run a length or two ahead of him. Irad Ortiz Jr. will know how to guide White Abarrio once he sees the break.

Although all four of White Abarrio’s wins came at Gulfstream, the fact that he ran reasonably well at Parx Racing and Thistledown means he can ship.

Because of his early pace advantage, White Abarrio is the selection. Given the public will love to bet Zandon based on his class and ability to hit the board in longer routes, White Abarrio should offer some value. As long as the price is right, White Abarrio works as a win and place bet.