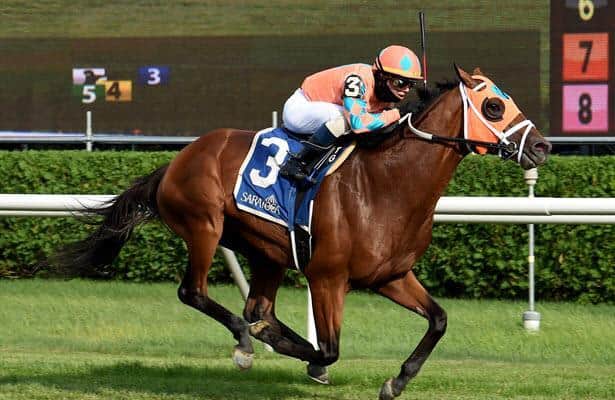 On the Preakness Stakes undercard at Pimlico, there are a couple of vulnerable favorites around even money who are not invincible on paper.

Some handicappers get the wrong idea when a horse is listed at that price or less on the morning line. Those odds do not always mean the horse is a lock to win. The point of creating the morning line odds is to predict how the public will bet.

In any case, here are thoughts on three undercard races on the May 15 Preakness card and the main event itself.

Even though Hozier is the best horse in the race, Market Cap is not one to underestimate.

Market Cap’s 2-year-old form shows some good efforts at Laurel Park, including a seven-length win to break his maiden last October and a runner-up finish by a neck to Ain’t Da Beer Cold in an optional claiming race one month later. In the latter race, Market Cap posted a 97 TimeformUS Speed Figure, which is not bad for the time in his career.

To end his season, Market Cap finished a disappointing fourth in the Howard County Stakes. In fairness, he initially settled farther back and out of his usual position behind a slow pace, as Ain’t Da Beer Cold set the first two fractions in 24.13 and 48.06 for the one-mile race. Behind those fractions, it was too difficult for Market Cap to make an impact.

The layoff is a concern, but trainer Jeremiah O’Dwyer fares well at Pimlico.

Market Cap is the upset choice at 15-1. Also keep an eye for bridgejumping action on Hozier, as his place or show pools might balloon to six figures.

As with Hozier in the Sir Barton, Mean Mary is clearly the best horse in the Gallorette Stakes (G3). However she enters this race off a 189-day layoff and faces a long campaign with bigger goals ahead. It makes sense to explore other options.

The longest shot on the morning line is Great Island, and that is surprising considering Chad Brown trains this mare. She has always shown talent in her short career.

Great Island seems to prefer 1 1/16 miles with two wins in three starts at the distance, with the only loss coming against Mean Mary in a 2019 maiden race.

After finishing second to Mean Mary, Great Island went on the shelf and did not return until last fall, when she broke her maiden by 3 ¼ lengths at Churchill Downs and also took an allowance at Keeneland by 1 ¼ lengths. Those were two impressive and promising wins off the layoff.

Two months later, she was second in the 1 3/16-mile Via Borghese Stakes at Gulfstream Park, where she lost by three lengths. Great Island also won a nine-furlong off-the-turf race this year in February.

In this spot, Great Island is back to 1 1/16 miles on turf and might turn the tables on Mean Mary if the favorite needs one race off the break.

At 12-1, Great Island is great value. Even if she comes down to 8-1 or 9-1, those odds are still fair, especially with the Javier Castellano/Chad Brown combination.

Somelikeithotbrown is a proven graded stakes winner and pacesetter who runs his best race when setting the pace without restraint.

In the Maker’s Mark Mile (G1) at Keeneland last month, Somelikeithotbrown was caught up in a speed duel with Get Smokin and Flying Scotsman. Subsequently, those three runners ended up seventh, eighth and last after blistering fractions.

Flying Scotsman appears in this race again, but the connections might hesitate to get into another speed duel with Somelikeithotbrown after the pace collapse of last time. He also drew Post 7 and may need to work slightly in order to cross over to the front.

From the rail, Somelikeithotbrown has a good chance to reach the front and set moderate fractions. What are the odds of another speed duel?

Somelikeithotbrown is the selection.

Medina Spirit owns the top five TimeformUS Speed Figures in this edition of the Preakness. The conversation is supposed to end there, as that is a huge advantage.

He also owns enough speed to set the pace, especially from Post 3. The only question is whether trainer Bob Baffert wants his stablemate Concert Tour sent to the front, or if Medina Spirit secures the lead naturally with Concert Tour pressing.

Just in case Medina Spirit misfires though, Midnight Bourbon is a useful addition to multi-race wagers. His sixth-place finish in the Kentucky Derby is better than the margin indicates, as a subpar break meant he could not utilize his natural early speed.

In a normal-sized field such as this one, there is less impediment to reaching the front for Midnight Bourbon. He possesses enough speed to stay within range of Concert Tour and Medina Spirit, and should get first run when the serious running begins.