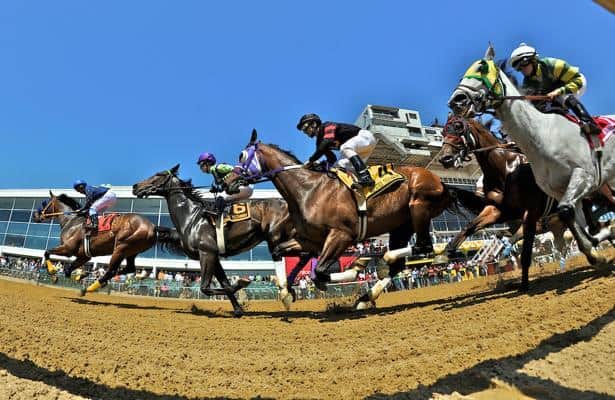 Pimlico takes some of the spotlight this weekend with plenty of stakes action on Saturday, but there is also the Santa Margarita Stakes (G2) at Santa Anita and William Walker Stakes on opening night at Churchill Downs.

As usual, it is time to find attractive prices at those three tracks. In the case of the Santa Margarita, the race lacks a good option at higher odds than 2-1. It all depends on the specific horse though. For some runners, 2-1 is attractive based on form and other factors.

Only Exogen’s most recent race makes her a contender, which is fine because she sits at 15-1 on the morning line. Even if those odds fall a little bit to the 10-1 range, that is acceptable.

In the Cicada Stakes at Aqueduct, Exogen made a nice closing bid on the inside to finish second by a head to Just Read It with a 96 TimeformUS Speed Figure. In comparison, the morning line favorite Littlestitious ran a 102 when winning the local Beyond the Wire Stakes, while the second choice Fraudulent Charge shows a 103 from the same race.

Note how the fourth-place finisher in the Cicada, Salt Plage, had previously run third and 1 3/4 lengths behind Fraudulent Charge in the local Wide Country Stakes.

Now, 102 and 103 obviously beat Exogen’s 96 if they all run the same. However, Exogen is not far off them and only competed for the second time for trainer Miguel Penaloza. In her first start for Penaloza, Exogen ran a 67 when taking a starter allowance at Parx Racing. On paper, it seems like Penaloza is gradually learning how to get the best out of Exogen.

Exogen lacks route experience, and that is the biggest concern. The pedigree helps though, as second dam Special Format is a Dynaformer half-sister to 2010 Suburban Handicap (G2) and Jockey Club Gold Cup (G1) winner Haynesfield.

Besides, receiving double-digit odds as a bettor is supposed to make the flaws more acceptable with the chance for a higher return.

Exogen is the upset choice.

In the Gotham Stakes (G3) at Aqueduct, The Reds could only manage a fifth-place finish while losing by seven lengths to Weyburn. Regardless, he ran well enough while putting up a 102 TimeformUS Speed Figure, which is competitive here. Also, this is a nine-furlong race, which makes it different.

The Reds broke his maiden at nine furlongs two starts ago. He also ran third by three lengths to Risk Taking in a nine-furlong maiden race on Dec. 13 with a 100 on TimeformUS. After that race, Risk Taking went on to capture the Withers Stakes (G3) on the same course with a 109.

Granted, the morning line favorite Maythehorsebwithu shows a 106 on TimeformUS for finishing second in the local Private Terms Stakes. When Maryland-based horses face outsiders though, sometimes they become exposed for being lesser than the speed figures indicate (ex. Alwaysmining).

In any case, The Reds is in the ballpark with his Aqueduct speed figures and projects to receive enough pace in front of him with Maythehorsebwithu, Shackled Love, Hello Hot Rod and Zertz owning speed. If The Reds starts at 4-1 or higher, that is decent value.

The Reds is the top choice and a possible single.

Harvest Moon faded to fourth by seven lengths in the Beholder Mile (G1) in a tough race off the layoff against Swiss Skydiver. Now, she stretches out in a spot with less speed.

To remind everyone of Harvest Moon’s promise last year, she won the Zenyatta Stakes (G1) as a 3-year-old filly with a 120 TimeformUS Speed Figure, before contesting the pace in the Breeders’ Cup Distaff and fading slightly to fourth with a 122 on TimeformUS. She only lost by 2 ½ lengths in the Breeders’ Cup to an active legend in Monomoy Girl.

Harvest Moon’s fade in the Beholder Mile is more disappointing, and the heavily favored As Time Goes By ran second in the same race. Nevertheless, Harvest Moon deserves a shot to turn the tables.

At 2-1, Harvest Moon is a fair deal. She’s the top selection, although multi-race wager players will need to throw in As Time Goes By as well.

If Charles Chrome draws in the William Walker as an Also Eligible, he is a player off his 2 ½-length allowance turf sprint win last November at Indiana Grand.

First of all, winning a five-furlong turf sprint by 2 ½ lengths is difficult because the shorter distance makes it harder to separate in the stretch. Winning by two lengths is dominant in turf racing, and especially in a sprint. Also, Charles Chrome’s 102 on TimeformUS ties him for the highest turf figure.

Charles Chrome ran that TimeformUS figure in November. Right now, he is probably a more developed horse physically and likely a faster runner. It is only a question of whether he displays his potential off the bench.

The workout tab is light. Yet, the connections must own some confidence if they want to start Charles Chrome in a $150k race now, rather than later.

If he starts at 10-1, those odds offset some of the flaws. Charles Chrome is the choice.