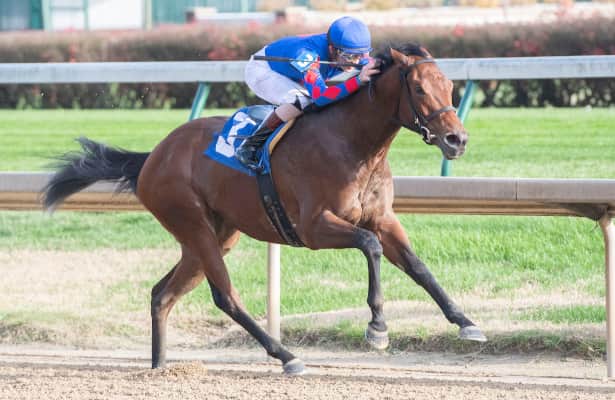 Bernardini progeny typically excel on dirt and especially move up on mud or slop. She Can't Sing has been an exception to the trend though, while building a nice turf career with nine trifecta finishes out of 14 tries and three turf stakes wins this year alone.

She Can't Sing takes a break from turf, however, as she starts in the Grade 3, $300,000 Chilukki Stakes at Churchill Downs on Saturday. Despite the switch back to dirt, bettors need to take this 5-year-old mare seriously as she does display some good dirt form in the past.

Here is a daily double connecting the Chilukki to the last race.

As stated above, She Can't Sing has been busy on turf this year with three wins in ungraded stakes races. She also shows a decent fifth-place finish by only 3 3/4 lengths in the Modesty Stakes (G3) against quality competition including the winner Bleecker Street and Fluffy Socks, and a third in the Ladies Sprint Stakes (G3) at Kentucky Downs.

In contrast to the current turf campaign, She Can't Sing came into the 2021 Chilukki with a strong win on dirt in a local seven-furlong optional claimer. She won by 5 1/4 lengths over Jilted Bride in second, while earning a career-high 115 TimeformUS Speed figure.

For some reason, She Can't Sing did not fire in last year's Chilukki. After making an early backstretch move on the inside of the pacesetter Princess Causeway, She Can't Sing backed up slightly and then folded completely on the far turn. She Can't Sing ended up a disappointing sixth, 17 3/4 lengths behind the winner Obligatory.

She Can't Sing can make amends and perform better this time.

For one, she faces easier competition. This biggest name in this edition of the Chilukki is Coach, who starts on the rail at 9-5 and offers mild talent relative to her odds. The morning line 3-1 third choice, Mariah's Princess, recently finished second in an optional claimer at Keeneland.

She Can't Sing, who is listed as 5/2, also starts from post six in this seven-horse field. The outside post means she can make a middle move in the clear this time. Sometimes turf horses do not enjoy taking dirt in the pocket when they switch surfaces and attempt dirt racing. If She Can't Sing remains in a wide stalking position, she might run better.

If She Can't Sing can match or improve on the 115 on TimeformUS earned on this course from last year, then she can win this weak edition of the Chilukki. Fair odds are 2-1 or higher.

Because of the 1 1/4-mile distance, handicappers need to take extra time to consider which horses will handle the trip.

Strong Quality does not win often, with only one first-place finish in six starts. But the extra distance might help this son of Quality Road out of a Tiznow mare. He tends to contest the pace and hang around late, while ultimately losing by a length or two.

At 10 furlongs, the closing moves of the other horses might flatten out, while Strong Quality figures to keep running at the same pace in the stretch.

If not Strong Quality, then Gate Runner can probably close from behind and contend for the win. If nothing else, he will love the distance.

Two starts ago, Gate Runner broke his maiden in a local 1 1/4-mile race by an impressive 5 3/4 lengths. Then in the same Keeneland allowance race where Strong Quality faded to third, Gate Runner ran an even fourth after running at the same pace for most the race. As strange as this sounds in today's era, nine furlongs is possibly too short for him.

As a son of Arrogate, Gate Runner is supposed improve as his career goes on. On the stretchout back to 10 furlongs, Gate Runner can move forward and build on the promising effort shown in his maiden win.