Saturday Play: Use this single in Churchill Downs double 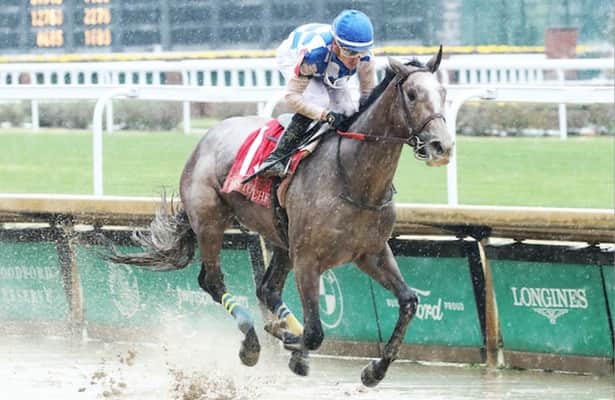 Last Saturday, the blog single She Can't Sing won the Chilukki Stakes (G3) and paid $9.04 for every $2 to win. But the listed Daily Double failed to connect when Strong Quality could not hold on in the finale.

This week, Hoosier Philly in the Grade 2, $400,000 Golden Rod Stakes offers a short price at even money. Regardless, the two-for-two filly deserves the low odds and works as a confident single in the listed double below.

Here is the short analysis for each race and the final tickets.

Hoosier Philly might seem like the type of favorite to avoid after splashing away to a 7 1/2-length win over the slop in the Rags to Riches Stakes. The current weather forecast calls for nothing more than clouds. But there is a counterpoint to the idea she only ran well because of slop.

In her career debut on Sept. 25, Hoosier Philly broke her maiden locally over fast dirt. Hoosier Philly only won by 1 3/4 lengths, but maybe the short 5 1/2-furlong distance prevented this runner from opening up on the field in the stretch run. Most horses meant for longer route distances cannot blow the field away in a sprint because the tempo is too fast.

Hoosier Philly gets one mile and one-sixteenth again in this spot and faces a weak and slow field relative to the Grade 2 label on it. With none of the other fillies offering any confidence, Hoosier Philly is the single.

The race also lacks a standout star. With that said, Curly Jack deserves respect for winning the local Iroquois Stakes (G3) in September and finishing a decent fifth in the Breeders’ Cup Juvenile at Keeneland after stalking a tiring pace.

For those two races, Curly Jack earned 103 and 106 TimeformUS Speed Figures. Neither of those numbers are exciting, but the 106 on TimeformUS can possibly get the job done against this field given the lack of standout runners entered. As a developing colt, Curly Jack should improve off the 106 figure and hit something more in the 110 range.

At 3-1 on the morning line, Curly Jack might offer reasonable odds, especially with his experience against better horses in the Breeders' Cup.

Players searching for a mild longshot though might want to consider Freedom Trail, listed at 6-1 on the morning line.

Freedom Trail shows two turf wins in two starts, with the most recent win coming in the Awad Stakes at the Belmont at Aqueduct meet last month.

Based on pedigree, this son of Collected is supposed to handle dirt. Freedom Trail’s second dam Refugee also produced multiple graded stakes dirt winner Hoppertunity and Executiveprivilege, who won one graded stakes on dirt. The former won an impressive $4.9 million in his career, while the latter took home $999,000 in a shorter career.

Although Freedom Trail’s first dam Freedom is a half-sister to Hoppertunity and Executiveprivilege, the damsire War Front possibly leans towards turf, which explains the first two starts on turf.

At 6-1 though, Freedom Trail is worth including in tickets in case the pace heats up.

Why is Instant Coffee ignored in this double ticket? Even though Instant Coffee ran well enough to finish fourth in the Breeders’ Futurity (G1), he lacks value at 5-2. Maybe if he loses and still finishes well, the value will return.

Curly Jack and Freedom Trail are the two final selections.