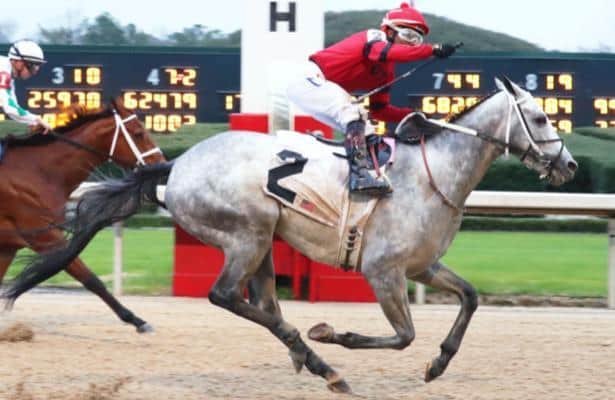 Not only does the Saturday card at Fair Grounds offer the Lecomte Stakes (G3) for 3-year-olds, but it brings together some familiar faces from the 2020 Kentucky Derby trail. In the Grade 3, $125,000 Louisiana Stakes for older horses, the returning favorite Wells Bayou meets Silver Prospector and Blackberry Wine, making this an interesting race to handicap.

Because Silver Prospector exits a tough trip and projects to offer value, he gets the nod and highlights the Jan. 16 selections across Fair Grounds and Tampa Bay Downs below. Click on race names for full entry table.

Adios Trippi did not run bad in the one-mile Cash Run Stakes at Gulfstream. After securing the lead through the inside, she tried to open up on the turn before fading in the stretch. For the third-place finish, TimeformUS still gave this filly a competitive 91 speed figure.

Now, this filly cuts back to seven furlongs against a weak group at Tampa Bay. She only needs to improve a few points off that 91 in order to win.

Given the 2-1 favorite Feeling Mischief offers some stamina questions past six furlongs, she is vulnerable, making it logical to look elsewhere.

The 7/2 Adios Trippi is the choice to lead this field from start to finish.

After a good break, he stalked the pace in third before losing ground on the turn and falling 5 ½ lengths off the lead. In the stretch run though, Thealligatorhunter moved forward again to secure third by a head over Gatsby.

For completing the trifecta, Thealligatorhunter earned an 87 TimeformUS Speed Figure.

In his prior start to the Inaugural, Gatsby had run a closing second in the Juvenile Sprint Stakes at Gulfstream Park West, 4 ½ lengths in front of The Distractor. The Distractor is entered in the Pasco and listed as 9/2.

As for the 2-1 favorite Nova Rags, he was a distant fourth in the Nashua Stakes (G3) at Aqueduct, also with an 87 on TimeformUS. Nova Rags lost by 14 ¼ lengths to Pickin’ Time, who recently ran a disappointing fourth in the Mucho Macho Man Stakes. Sometimes it is hard to trust Aqueduct shippers.

Perhaps Nova Rags outclasses this group as he moves away from a graded stakes, but given the matching speed figures, Thealligatorhunter is worth a shot at a more generous price.

At a minimum, both colts are usable to start off the late Pick 5.

On the first turn, Silver Prospector went at least four wide. After continuing to travel outside of the crowded field in midpack, Silver Prospector tried to launch a five-wide move on the second turn. Unfortunately, he came up empty in the stretch and had to settle for a sixth-place finish, seven lengths off the winner Bodexpress.

This former Derby trail runner deserves another shot. Off a 181-day break, he won a nine-furlong optional claimer at Churchill Downs by one length over Multiplier while earning a 114 TimeformUS Speed Figure. He only needs to improve slightly off that 114.

Expect Blackberry Wine and Wells Bayou to contest the lead, with Silver Prospector a few lengths behind those two pacesetters. From Post 3, a clean trip is more likely.

Remember, Silver Prospector did capture last year's Southwest Stakes (G3) at Oaklawn over Wells Bayou with a 119 on TimeformUS, before tailing off in next two starts.

Silver Prospector can take another Grade 3 in this spot.

She took both of her two races with ease, winning by 2 ¼ lengths to break her maiden and four lengths under a hand-ride to take the Glorious Song Stakes. On synthetic, each length is worth more than on dirt because of the different natures of both surfaces. While not the same, synthetic racing is more similar to turf racing.

Souper Sensational also earned a 102 and 101 on TimeformUS in those two races, giving her the high figures in this race if not accounting for the different surfaces.

From a pedigree standpoint, she is supposed to handle dirt as a daughter of Curlin and Kateri, a half-sister to 2013 Ogden Phipps Handicap (G1) winner Tiz Miz Sue.

Souper Sensational is the choice, but throw in Sun Path too, just in case the Woodbine star does not handle dirt.

Mandaloun enters the Lecomte with a 2 for 2 record for trainer Brad Cox.

In his optional claiming win at Churchill Downs, Mandaloun only won by 1 ¼ lengths. But he also beat a decent group in that race. The second-place Twilight Blue went on to run a good third in the local Sugar Bowl Stakes, while the third-place Founder previously beat the talented Highly Motivated in a Saratoga maiden.

Mandaloun earned a 93 on TimeformUS, which is a competitive number in this field. On BRIS, he picked up the high last-race speed rating at 92.

Even as the favorite, Mandaloun is the top choice.

If the scratches in this race eliminate some of the speed threats, then also move up Midnight Bourbon. Consider Beep Beep as well, if Norm Casse keeps him in.