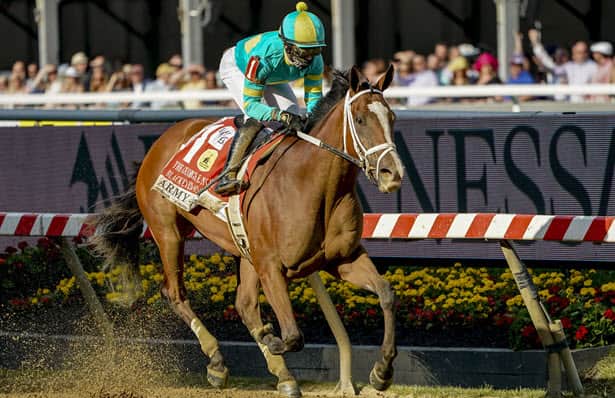 With both the Grade 3, $200,000 Regret Stakes and Grade 3, $200,000 Arlington Stakes on the Churchill Downs Saturday card, as well as four other stakes races also worth $200,000 each, there is plenty of great racing on tap at the historic racetrack.

Here are a couple of bets for the June 4 Churchill Downs card.

Pauline’s Pearl had been the right pick against the overbet Shedaresthedevil in the La Troienne Stakes (G1) on the Kentucky Oaks undercard last month. Given Pauline’s Pearl’s morning line odds of 3-5 though in this spot, now is the right time to jump off the ship for a while and search elsewhere on top.

When Army Wife tried the Alabama Stakes (G1) at Saratoga in August, she gave an admirable effort by taking the lead on the far turn, before giving way to the Kentucky Oaks champion Malathaat and eventually Clairiere too.

Army Wife only lost by two lengths in third.

She then finished third again in the Cotillion Stakes (G1) behind Clairiere and Obligatory, who remain two high-class fillies in the current season. Cross out the fading fourth-place finish on slop in the Falls City Stakes (G2).

In her season debut, Army Wife is liable to move up as a developing 4-year-old filly. At 7/2 or higher, she is the right choice, especially if Pauline's Pearl ends up below even money.

Scalding has been the hot horse with four straight wins. In that time, he went from breaking his maiden to capturing the Challenger Stakes (G3) at Tampa Bay and Ben Ali Stakes (G3) at Keeneland in his last two starts.

For the Ben Ali win, Scalding earned a career-high 123 TimeformUS Speed Figure. The 123 on TimeformUS puts Scalding in the same neighborhood as the 8-5 morning line favorite Americanrevolution.

Why is Florent Geroux riding Americanrevolution though? Luis Saez rode this colt in every start of his 3-year-old season and ends up on Proxy here.

Scalding is the more interesting choice, and his 5/2 morning line odds are good enough when considering how low Americanrevolution might fall. Although Americanrevolution is listed at 8/5, his actual odds by post time will likely end up lower and somewhere in the even money range.

For a more interesting payoff, think about using Scalding in a double.

James Jones makes his third start for trainer Chad Brown and owner Peter M. Brant. In his stakes debut, he could move forward as there are no real stars present. Plus, James Jones won his maiden impressively.

Winning by two or three lengths counts as a dominant margin on turf. James Jones broke his maiden locally by 2 1/4 lengths last month.

Speaking Scout also brings some intrigue after winning a Keeneland allowance race on April 29 by one length over Tallahatchiebridge. From watching the replay, Tallahatchiebridge was never a real threat to win.

On the negative side, Speaking Scout’s effort in the Kitten’s Joy Stakes at Gulfstream (G3) in February looks subpar. He flattened out from a close fourth for most of the race to sixth.

Perhaps being gelded on Feb. 22 helped Speaking Scout, as well as switching to Luis Saez for the Keeneland win. Saez stays aboard here.