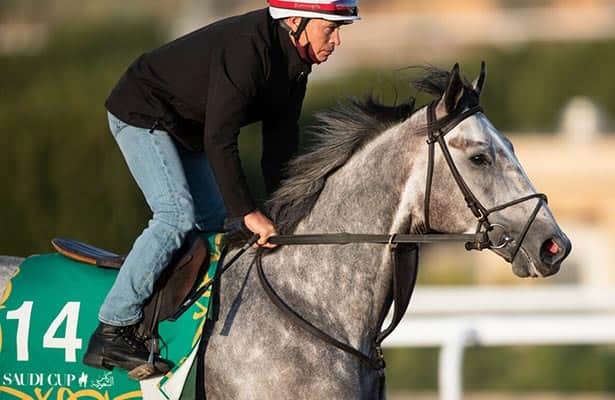 Given the amount of local horses on the Saudi Cup card Saturday at King Abdulaziz Racetrack, handicapping some of the races can prove tricky without familiarity of the entries. The ones that appear playable enough for an American handicapper include the $2.5 million Red Sea Turf Handicap, $1.5 million Saudi Derby and $20 million Saudi Cup.

Here are some brief thoughts on those three Saudi races, as well as the Miracle Wood Stakes at Laurel and an optional claimer featuring a famous sibling at Fair Grounds.

This 1 7/8-mile race promises to offer a grueling test.

After three subpar efforts in a row, the 6-year-old horse Mildenberger (12-1) took a 2 1/16-mile race on synthetic at Wolverhampton last month. Last June, Mildenberger was also second in the two-mile Sagaro Stakes (G3) on synthetic at Newcastle, ahead of the 8-year-old gelding Prince of Arran in third.

For those who follow Australian racing, Prince of Arran turned in a great closing third in the Melbourne Cup (G1) last November, only losing by ¾ of a length.

Earlier in Mildenberger’s career, he also ran third to Stradivarius in the 2019 Yorkshire Cup (G2) and second to Roaring Lion in the 2018 Dante Stakes (G2).

The favorite in this race, Call The Wind (2-1), exits a bad effort in the Prix du Cadran (G1) where he lost by 15½ lengths. The expected second choice Secret Advisor (9-2) exits a fourth-place finish in the Allianz – Grosser Preis Von Bayern (G1) in Germany, losing by 5¼ lengths after briefly taking the lead in the straightaway. Both of them are beatable.

At double-digit odds, Mildenberger is the choice to outlast the field.

Although Americans dominate on dirt in many Middle Eastern stakes races, Cowan (4-1) is vulnerable at the one-mile distance of this race.

The expected favorite Soft Whisper (2-1) is the better bet. Not only does she already own multiple wins at one mile, but she recently won the UAE 1000 Guineas at Meydan by an easy seven lengths under a hand ride. It was clear she had more left in the tank.

Notice how Mnasek was second to Soft Whisper after a troubled start, and she went on to capture the UAE Oaks (G3) on the same course by 6½ lengths. Mnasek’s subsequent win must validate Soft Whisper’s romp.

Is it possible that Soft Whisper is nothing more than the equivalent of an allowance level-horse in America? Sure. That is a concern. Regardless, she is not facing any monster in Cowan and clearly owns high talent relative to the Middle Eastern-based horses.

Jockey Mike Smith takes the call on Soft Whisper, which is a great sign.

Soft Whisper is the choice, as long as her odds do not fall below 8-5.

As stated in an earlier post, Tacitus (15-1) is the choice to finish second or third. He is a good closer who knows how to pick up checks.

Sometimes bettors use a backwheel key if they believe a horse can hit the board without winning. For example, if Tacitus is the backwheel key in third, a trifecta ticket can be built around him with multiple horses in the first and second slots.

Charlatan (7-5) and Knicks Go (5-2) are the most likely winners based on raw talent and overall records. Those two horses go in the first slot of this backwheel example.

In the second slot, Charlatan and Knicks Go are joined by fellow Americans Max Player (20-1) and Sleepy Eyes Todd (20-1) because even the lesser American dirt horses usually can out-finish most international runners. However, the winner of the Champions Cup (G1), Chuwa Wizard (15-1), deserves respect as well. He is thrown in with the Americans.

Then in the third slot is Tacitus alone. Although he finished fifth in this race last year, this is arguably a weaker version of the contest.

The structure is not for everyone. In a traditional trifecta format, bettors could put both Charlatan and Knicks Go on top and build a traditional pyramid structure with the “fat” part in the third slot. But of course, it gets more expensive to go that route.

According to TimeformUS Pace Projector, this is an extreme pace situation on the fast side. If the projection holds true, the pace is liable to collapse.

Tiz Mandate (10-1) stretches out to one mile for the first time and might take advantage of both the longer distance and fast pace. In his most recent start, he closed steadily for fourth in the local Spectacular Bid Stakes on Jan. 16, losing by 3¼ lengths.

Not every closer who tries a longer distance improves. However, Tiz Mandate is a grandson of Tiznow on top. In addition, his bottom side includes other route influences such as A.P. Indy and Thunder Gulch. Based on those names, he is supposed to want more ground, although pedigree analysis is not an exact science.

At 6-1 or higher, Tiz Mandate is a Win bet candidate.

According to TimeformUS Pace Projector, Cowboy Diplomacy (5-2) is slated to lead the field uncontested through a slow pace. He is a full sibling to Monomoy Girl.

Cowboy Diplomacy turned in some poor efforts last year at Churchill Downs and Keeneland. But he found the winner’s circle again at Indiana Grand in an optional claimer and then ran a strong second to Chess Chief in a local optional claimer Dec. 18.

This 5-year-old gelding with a famous sister is rounding into his best form.

Even as the favorite, Cowboy Diplomacy is the choice at 8/5 or higher.