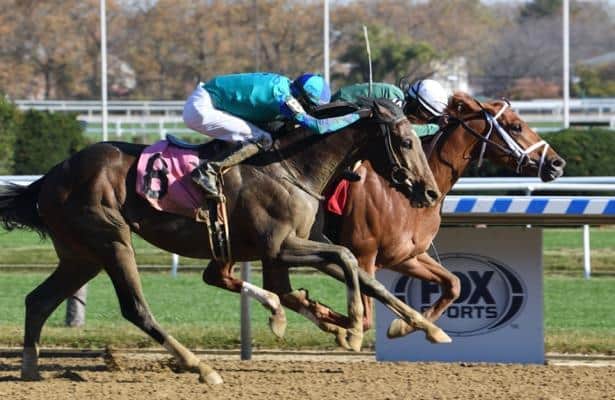 Only two years ago, a Bob Baffert-trained colt named Coliseum took the racing world by storm after only one maiden start at Santa Anita Park. The story did not end well though, as he ran a disappointing sixth at 3-5 in the Grade 3 Sham Stakes.

Fast forward two years later, and the Baffert-trained Concert Tour enters the $200,000 San Vicente Stakes (G2) with major hype attached after only one maiden start. Given the low price on him, this blog will instead aim for value and select The Chosen Vron.

Read about The Chosen Vron and other Saturday selections across Aqueduct, Tampa Bay and Santa Anita below.

As stated in an earlier post, Donegal Bay is a well-bred gelding who displayed improved speed and finished strong when breaking his maiden by 4¼ lengths at Gulfstream on Dec. 12. The effort is nice step forward from the Saratoga effort.

Donegal Bay needs to take one more step forward and build off that 96 TimeformUS Speed Figure in his graded stakes debut. There is no reason why he cannot improve again, especially as a grandson of Flute stretching out to nine furlongs. Flute won the 2001 Kentucky Oaks and 1¼-mile Alabama Stakes (G1).

As long as he does not fall lower than third choice, Donegal Bay is playable.

Greyes Creek is an improving 5-year-old horse trained by Chad Brown who enters this race off a one-length win in a Dec. 19 Gulfstream optional claimer.

From a visual standpoint, Greyes Creek won the race without trying too hard. Jockey Tyler Gaffalione only gave him a few nudges in mid-stretch and used the whip moderately once. In turf racing, a one-length score is a good margin considering the compact fields.

In the Tampa Bay Stakes, Greyes Creek might receive a possible setup with Get Smokin and Proven Strategies both requiring the lead for their best shots. He also gets the services of John Velazquez this time.

Cross out his dirt starts, and this horse owns three wins in four starts on turf.

If Greyes Creek is second choice at 4-1, that is a good value. Scratch this choice though if the expected rain takes this race off turf.


As rain looms in the forecast, Curlin’s Catch is an interesting filly pedigree-wise with Curlin on top and an A.P. Indy mare on the bottom. Although pedigree analysis is never an exact science, both sires are proficient overall with creating mud runners.

In terms of actual form, she disappointed in her first two starts with a runner-up finish at even money Oct. 11 and fifth in the Princess Elizabeth Stakes. However, both of those efforts came on synthetic at Woodbine.

Curlin’s Catch led the field Jan. 3 at Gulfstream all the way to break her maiden on dirt by 2¾ lengths with a 91 TimeformUS Speed Figure. She needs to build on that 91 in this spot, but the fillies here are not exactly fast on the TimeformUS scale either. The favorite Gulf Coast only ran a 94 on TimeformUS in her recent Cash Run Stakes win.

If the main track is wet, consider Curlin’s Catch.

Known Agenda stands out on class and speed.

In a nine-furlong maiden race Nov. 8 at Aqueduct, Known Agenda fought off the regally-bred Greatest Honour in the stretch run to break his maiden by a head while earning a 102 TimeformUS Speed Figure.

Greatest Honour not only went on to break his maiden, but he won the Holy Bull Stakes (G3) at Gulfstream by 5¾ lengths.

After beating Greatest Honour, Known Agenda was a flat third in the Remsen Stakes (G2), losing by nine lengths in the slop. Yet, he still shows a 104 TimeformUS Speed Figure for his distant third, which is the highest speed figure in the field.

Given those facts, the 6-1 morning line sounds like a great deal on Known Agenda. Even if he falls down to more realistic odds of 3-1, those are still fair terms considering his advantage on TimeformUS.

Known Agenda is the main selection. In multi-race wagers, also include the inexperienced Candy Man Rocket in case he moves forward.

Moonlight d’Oro took a nice step forward when switching to a route distance at Los Alamitos. She broke her maiden by three lengths with a 103 TimeformUS Speed Figure, which is 17 points higher than the 86 she ran Nov. 7 in a Del Mar sprint.

Perhaps the second start off the bench angle worked in her favor as well.

Regardless, Moonlight d’Oro is in a great spot tactics-wise here with Kalypso, Honor America and Brilliant Cut all candidates to tangle on the lead. Moonlight d’Oro can sit right off the pacesetters and take over.

As a note, Kalypso already ran two different 105 TimeformUS Speed Figures, which beats Moonlight d'Oro's 103. But Kalypso is drawn inside the other speed and appears likely to take the worst of a fast pace.

With the last point in mind, Moonlight d’Oro is the choice.

The Chosen Vron took his career debut against Cal-breds on Dec. 27 in easy fashion, powering home by 6¾ lengths after John Velazquez gave the signal for more in the stretch. Velazquez’s presence on an Eric Kruljac-trained horse was a great sign in the first place, as Kruljac is a low-profile trainer on the west coast.

Now, Mike Smith takes over in the gelding’s step forward into a graded stakes race off that Cal-bred maiden win.

At this stage in Smith’s career, why would he accept the mount on a Cal-bred with only a restricted maiden win to his credit in a graded stakes race, unless he knew the particular Cal-bred had talent?

The Chosen Vron does need to improve off his 98 TimeformUS Speed Figure, which is low compared to the heavy favorite Concert Tour and his 114 on TimeformUS.

For what it is worth though, the two horses are not far apart on other past performance figures. BRIS has them tied for the highest speed rating at 94, while Beyer gave Concert Tour an 88 figure and The Chosen Vron an 86 for their debuts. Two points is not insurmountable.

Further complicating matters is the lack of another six-furlong race on the same card as Concert Tour’s maiden score, or even any other dirt sprint for that matter. Sometimes the lack of similar races makes figure-making more complicated, putting into question any number for him.

Remember the lesson of Coliseum. Whether Concert Tour wins the San Vicente or not, the price is likely to dip lower than his fair value as a Baffert-trained maiden winner with a moderate speed figure on Beyer and BRIS.

The Chosen Vron won his maiden race easily, and he is tied with Concert Tour on BRIS. At a minimum, it gives bettors reason to think about the race.