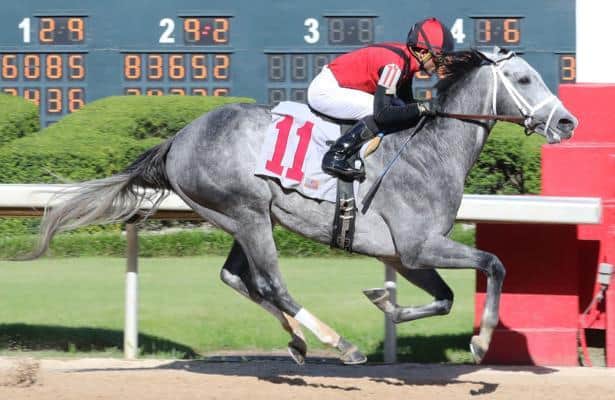 Why only four races? As written before, it is a better strategy to focus on good opportunities rather than bet all the races on every card.

Here are selections and short analysis for those four April 10 races.

In two starts, Swiftsure only won a maiden and allowance races. Both of those races came at six furlongs too, making him a strange choice in this two-turn route.

Yet, Swiftsure is intriguing as one of only two horses in this race with a 111 TimeformUS Speed Figure. The other 111 on TimeformUS belongs to the favorite Proxy, who ran fourth in the Louisiana Derby (G2) and carries a three-race losing streak.

The question is whether Swiftsure can translate that ability to 1 1/16 miles. Uncle Mo is fine for siring longer routers, but Swiftsure’s dam side is harder to read.

From a visual standpoint though, Swiftsure gave the impression of being able to handle a route. He initially ran 3 ½ lengths off the pacesetter in his Oaklawn allowance win, before taking over and opening up late to win by 3 ½ lengths.

Noble Reflection is the other horse to use based on his impressive 4 ½-length maiden win, also at Oaklawn at six furlongs. His 109 TimeformUS figure is in the top mix. Plus, the dam side for Noble Reflection is great for routing, as his dam Deal of the Decade is a half-sister to Clear Mandate, the 1997 Spinster Stakes (G1) winner.

When watching Noble Reflection’s Oaklawn replay though, he does not seem as convincing as Swiftsure. Noble Reflection was eager to open up early by 2 ½ lengths in the first quarter-mile of a sprint. That type of early energy might prove his undoing in a longer route race.

Yet, Noble Reflection is the second choice based on raw talent alone. Swiftsure is the top selection based on talent and his better potential to handle the two-turn route.

The last time Edgeway met Frank’s Rockette in the Purple Martin Stakes last April, Frank’s Rockette put pressure on Edgeway as she set fast fractions of 21.63 and 45.46. TimeformUS marks the fractions in red, backing up the idea of a fast pace.

Frank’s Rockette eventually beat Edgeway by a neck for second, while the talented Kimari went by both fillies in the stretch run to score an impressive victory.

Before picking Frank’s Rockette though, consider that Edgeway made only the second start of her career in the Purple Martin. Also, Edgeway set the pace on the rail, which is the more difficult position when another horse is applying pressure.

Edgeway is a more developed 4-year-old filly by this point. In her 2021 debut, she won by three lengths in a Santa Anita optional claimer with a 115 TimeformUS Speed Figure, a TimeformUS figure that is higher than Frank’s Rockette’s five most recent races.

With those points in mind, Edgeway is the choice.

Rushie makes his 4-year-old season debut in the Oaklawn Mile. As written in an earlier post, he gave promising signs last year, at least at shorter distances.

In February 2020, Rushie broke his maiden at one mile at Santa Anita. After getting blown out by Charlatan by 10 ¼ lengths in his next race, Rushie then took a flight to Oaklawn and won an optional claiming race at 1 1/16 miles for his second win.

Rushie then made two attempts at nine furlongs in the Santa Anita Derby (G1) back home and Blue Grass Stakes (G2) at Keeneland. While he ran third both times, the lack of a final stretch punch was the sign of a horse wanting to cut back.

He did cut back in the Pat Day Mile (G2) successfully, winning by 1 ¾ lengths.

Forget about the off-the-board effort in the Breeders’ Cup Dirt Mile, as Rushie made his debut against older horses and ran seventh.

Rushie shows some fast works for his first start this season, especially on March 20 when he went around Santa Anita in a 46 flat bullet with his accomplished older stablemate Ce Ce. He also brings a useful stalking style that will put him right behind the fast early speed.

While his speed figures might need to move forward, that is expected of a more grown-up and mature horse in his 4-year-old season.

Rushie is the top selection.

First of all, Concert Tour is obviously the best horse on paper with three wins in three starts, including the San Vicente Stakes (G2) and Rebel Stakes (G2).

If the speedy Caddo River is let loose this time by Florent Geroux though and allowed to run fast fractions in an attempt to secure the lead, Concert Tour is not likely to leave him alone. Likewise, if Concert Tour goes for the lead again, Caddo River will not be held back as much.

The possibly of a speed duel is real, which brings Hozier into play. Yes, Hozier had a perfect trip when second in the Rebel. It does not matter because he can get a good trip again. In this six-horse field, is there a high chance of traffic problems? For closers, less horses equals less traffic to navigate through.

Hozier’s 108 TimeformUS Speed Figure is competitive in this spot and only one point off Caddo River’s best figure.

Concert Tour still must be used in multi-race wagers too, but Hozier also deserves a slot in those tickets and works as the better option for win and place bets.