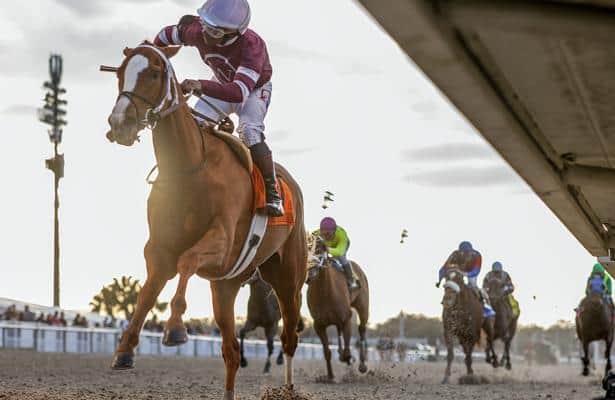 Turf marathons are one of the more time consuming races to handicap because of the deemphasis on figures and greater reliance on trip notes. Picking out less obvious horses is not easy in this category, which is why other kinds of races are typically highlighted on this blog.

In post-Breeders’ Cup season though, there are less graded stakes races to choose from, and the only one at Aqueduct on Saturday is the Grade 3, $100,00 Red Smith Stakes. But the Red Smith does feature one interesting runner from the Shug McGaughey barn who had traffic problems in the stretch of the Sycamore Stakes (G3) – North Dakota.

Wow Brown gets the nod for two reasons. For one, he owns the high last-race figure on TimeformUS with a 107 in his Oct. 26 allowance win at Finger Lakes.

Also, Wow Brown is likely to secure the best position in this race.

According to TimeformUS Pace Projector, The Revenger and Riken are probable to contest the pace. On the projection graphic, right behind them is Wow Brown, who is likely to secure a great stalking position in third and strike first if the expected two leaders become tired.

Switching back to fast dirt is a minor concern, but Wow Brown also owns a 3 ¼-length dry dirt win on Sept. 15 in a Finger Lakes allowance.

For most of the Sycamore, North Dakota traveled in a good spot right behind the leaders. He also maintained his position on the far turn before gearing up in the stretch.

Unfortunately, North Dakota had no path to move through.

Watch North Dakota progress slightly on the inside, before the pacesetter Postulation shifts back left and takes away the only option.

From there, Corey Lanerie tries to tip North Dakota out, but there is nowhere for him to go with a tired Aquaphobia still blocking the two-path. As Red Knight mows all of them down with a clear outside run, North Dakota goes inside again and ends up fourth after Postulation holds second and Ziyad manages to make a belated outside run for third.

North Dakota had a strong chance for second with a better path, if not the win.

In this spot, North Dakota switches to an excellent turf jockey in Jose Lezcano and draws well in Post 5 for his second career graded stakes attempt. If he remains at 10-1 or higher, it is hard not to bet him.

At those odds, North Dakota is also a good Win and Place bet. As a 4-year-old colt under an experienced trainer, he will move forward.

“Slow” is an understatement when describing Mystic Knight’s break in an Oct. 15 Keeneland maiden race. He made a hop in the air and fell several lengths behind immediately.

To his credit, Mystic Knight gave a nice run on the turn and kept inching forward for most of the stretch run to eventually pick up fifth, 11 lengths behind the winner. The long margin is excusable because the early miscue meant he had to expel energy to get back into a reasonable position on the turn, and from there he became too tired.

Now trainer Chad Brown puts the blinkers on Mystic Knight. Plus, the one-mile distance might help, as there is stamina on his dam’s side.

As stated earlier in the week, Finite makes her third start off the bench after a strong runner-up finish in the Raven Run Stakes (G2) with a 112 on TimeformUS.

If Finite improves just a few points off that 112, she wins.

Midcourt ran against Breeders’ Cup Classic horses in the Awesome Again Stakes (G1) and did well enough considering the poor trip from start to finish.

First of all, Midcourt went wide on the first turn against a fast pace, which is a terrible starting point. He kept running wide while staying close to the leader Take the One O One, with Sleepy Eyes Todd and Maximum Security to the left of him.

On the far turn, Improbable circled the field and took over. But despite going wide again on the second turn, Midcourt kept trying in the stretch run. As Take the One O One and Sleepy Eyes Todd faded because of the grueling pace, Midcourt stayed on Maximum Security’s flank and only missed second by half a length at the wire.

Sleepy Eyes Todd returned to win the Lafayette Stakes on the Breeders' Cup undercard, while Improbable finished an excellent second in the Classic.

Midcourt shows a 125 TimeformUS Speed Figure for his third-place effort, which is a figure that will win the Native Diver if he repeats it. His only pace threat is Stellar Sound, a 3-year-old filly who is overmatched.

But on that same topic, notice how Popular Kid was claimed twice in a row in his past two starts. It only signals that he is a happy and healthy 6-year-old gelding.

Also note how Miller moves Popular Kid up to the $50k claiming level for Altamira Racing Stable after they only paid $20k for him in the Nov. 1 optional claimer.

Popular Kid won that sprint race as well with a 102 TimeformUS Speed Figure. He needs to move forward on the stretchout to beat Kershaw, but Miller is the type of trainer that somehow gets horses to leap up to their best efforts (ex. C Z Rocket).