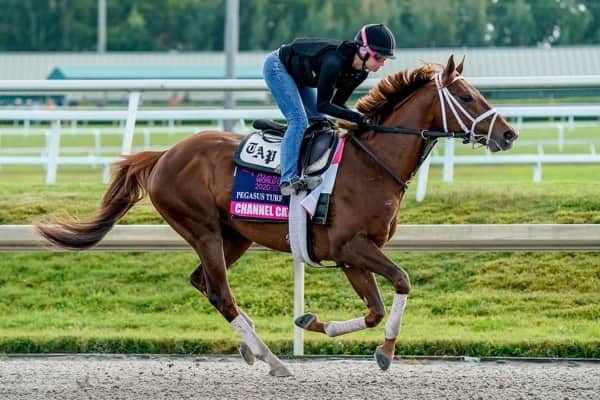 From a betting perspective, Belmont Park offers an interesting set of races on Saturday when the Grade 1, $700,000 Man o’ War Stakes headlines a set of 11 races. On the undercard, there are four different Grade 3 stakes races to study and most of them are worth betting.

Some rain is in the forecast, but the projected downfall seems light.

Here are selections for the Man o’ War and three of the four Grade 3 races.

On paper, the speedy Chateau is supposed to lead this small field uncontested through a slow pace. He also gets his preferred distance of six furlongs.

Forget about Chateau’s fade in the Carter Handicap (G1) at seven furlongs last month. This is the type of sprinting pacesetter that cannot win past 6½ furlongs.

If it rains and Firenze Fire becomes overbet, then both factors are a bonus.

Given the six-furlong distance and pace scenario, Chateau is the logical choice.

Before writing off the 20-1 Platinum Paynter, take a look at this mare’s two starts under trainer Juan Vazquez.

Platinum Paynter ran a close fourth by one length in the Forever Together Stakes at Aqueduct last November, and then came back to finish second by half a length to Regal Glory in the Plenty of Grace Stakes last month on the same course. She put up career best TimeformUS Speed Figures of 113 and 116 in those two races.

Losing by half a length to Regal Glory is not something to ignore. Last year, Regal Glory won the Lake George Stakes (G3) and Lake Placid Stakes (G2), as well as the Kentucky Downs Ladies Turf Stakes for $500,000.

All of Platinum Paynter’s turf efforts since last fall show an improved horse. After she won an allowance at Delaware in October, it is a wonder why the old connections chose to run her in a $12,000 claiming race at Parx a few weeks later and lose Platinum Paynter to a claim.

As for the Beaugay field, Platinum Paynter faces a proven filly in Harvey’s Lil Goil, as well as Civil Union and the former European-based Lemista, who makes her debut for trainer Chad Brown. In Platinum Paynter’s favor, she catches all three of those names off significant layoffs and projects to control the pace scenario as well.

Platinum Paynter is one to consider, at least for horizontal wagers.

At Platinum Paynter’s morning line odds of 20-1, a win and place bet makes sense. A third idea is to backwheel this mare in second underneath the rest of the field (minus Thankful). Just make sure the odds stay in double-digit range, as she becomes over bet otherwise.

As stated in an earlier post, Wolfie’s Dynaghost brings interesting credentials off only one maiden start last November at Aqueduct.

In that maiden race, Wolfie’s Dynaghost won and beat names such as Weyburn, Unbridled Honor, The Reds and Dynamic One. Of course, Weyburn won the Gotham Stakes (G3) recently in March before finishing fourth in the Wood Memorial Stakes (G2).

In addition, Unbridled Honor recently ran second in the Lexington Stakes (G3), The Reds won the Federico Tesio Stakes at Pimlico and Dynamic One was second in the Wood Memorial to Bourbonic before finishing a dismal 18th in the Kentucky Derby.

For the maiden win, Wolfie’s Dynaghost shows a 97 TimeformUS Speed Figure. He needs to improve to take this race, but that is a reasonable expectation given the strength of his maiden win.

Trainer Tom Albertrani must feel confident to begin Wolfie's Dynaghost's campaign in a Grade 3 race, rather than search for a confidence-building optional claimer or allowance.

Assuming he remains third choice or higher, Wolfie’s Dynaghost is a viable win and place bet option. In horizontal wagers, also use Promise Keeper, Nova Rags and Risk Taking too if the ticket does not become too expensive.

Channel Cat has taken a while to round into form, but he seems at that point now.

In his most recent start, he made use of his tactical speed in the Elkhorn Stakes (G2) at Keeneland to track the leader Tide of the Sea. When it came time to run on the final turn, Channel Cat and Say the Word found themselves contesting the lead.

Although Channel Cat became tired in the last few strides, he still put up a good fight until late in the stretch and held second while earning a 121 on TimeformUS as well. In two previous starts this year, Channel Cat ran mediocre speed figures of 115 and 117 when fifth in both the Fort Lauderdale Stakes (G3) and W. L. McKnight Stakes (G3).

This is a turf marathon though and speed figures do not necessarily hold the same significance as on dirt. The point is Channel Cat made a step forward in form.

Now, Channel Cat faces the 2019 Irish Derby (G1) winner Sovereign and the consistent Gufo. Sovereign never won in five starts after the Irish Derby though. He was second to Enable last July, but the effort came in only a three-horse field. As for Gufo, he might find himself too far back early on a possible wet turf course.

In case it does rain, Channel Cat is a proven winner on wet turf.

At 10-1 odds, Channel Cat is worth a play as he can run with the best turf horses when at his best. It will help if he flashes the same tactical speed as he did in the Elkhorn.