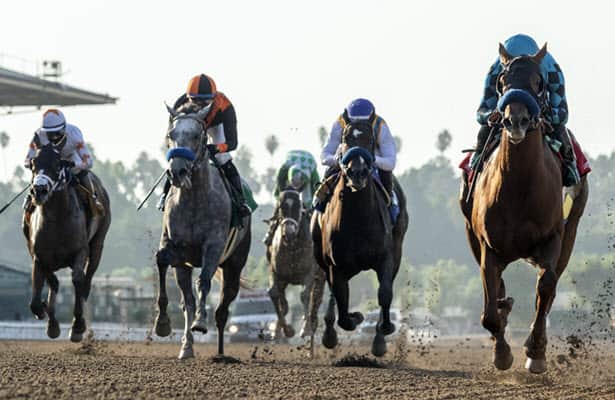 As shown before, some horses turn in average efforts at shorter distances before finally waking up on the stretch out. Mrs. Danvers is one example of this. The longer distance allows stamina-filled runners without the right acceleration in sprints to utilize their even tempo to a more successful degree.

In the Grade 1, $300,000 Starlet Stakes at Los Alamitos on Saturday, the Bob Baffert-trained Kalypso stretches out from six furlongs to 1 1/16 miles and could follow the same pattern of improvement.

She leads off the six selections across Los Alamitos, Tampa Bay and Aqueduct.

The notable part is that Kalypso put up even fractions of 22.17, 45.14 and 57.35, and TimeformUS gave her steady early pace figures of 101, 105 and 102. Because of the modest fractions, Kalypso only kept a one-length margin between her and fellow Baffert runner Illumination through the first half, which is a sign that she can control her tempo.

The effort points to a filly patient enough to handle a two-turn stretchout.

In this spot at 1 1/16 miles, Kalypso is a candidate to lead or contest the pace through moderate fractions. Astute offers speed too, but notice that Astute is drawn between two Baffert fillies in Princess Noor and Varda. It is not hard to imagine Astute getting squeezed at the start.

Kalypso’s pedigree fits route races. Her sire Brody’s Cause took the 2015 Breeders’ Futurity (G1) and 2016 Blue Grass Stakes (G1). On the dam side, Malibu Cove is a full-sister to the multiple graded stakes-winning Prospective, who won the 2012 Tampa Bay Derby (G2) and Ohio Derby (G3).

When it comes to 2-year-old first time starters, the debuting horse's pedigree and workouts take importance in the place of proven form.

On XBTV, watch Miss Melody’s Nov. 20 workout in company with Commas Save Lives. Miss Melody easily handles the recent maiden claiming winner and pulls away under her own power, as Commas Save Lives flounders under urging. Even though the stablemate is overmatched, it is great to see how Miss Melody separates herself.

Miss Melody is the choice. Watch to see if her odds drop from 6-1, as major dips caused by insiders sometimes offers clues in maiden races.

Gulf Coast is the top choice because she broke her maiden with a 100 TimeformUS Speed Figure at Indiana Grand at the same six-furlong distance as this race. Stepping up into stakes company off a maiden win is never easy, but she owns the best figure in this field by eight points.

An eight-point advantage in the speed figure department is significant.

Trainer Rodolphe Brisset employs a high percentage jockey in Antonio Gallardo as well, although the two of them show no races together over the past year.

If Gulf Coast remains around 7/2, that is excellent value.

Cost Average ran a distant sixth in his career debut at Belmont, losing by 15 ¼ lengths. But this colt deserves another look because of the key race angle.

Highly Motivated won that Sept. 27 maiden race, and went on to capture the Nyquist Stakes by an impressive 4 ¼ lengths on the Day 1 Breeders’ Cup undercard at Keeneland. For the stakes debut win, Highly Motivated leapt up to a 109 TimeformUS Speed Figure, 15 points higher than his 94 in the maiden race.

Known Agenda was second in the Sept. 27 race, and on Nov. 8 he broke his maiden locally by a head over Greatest Honour over nine furlongs, earning a 102 on TimeformUS. In his runner-up finish to Highly Motivated, he only ran a 93 figure.

Given those two next-out winners, it is not a bad bet to assume Cost Average improves upon his 75 TimeformUS Speed Figure upon debt by 10 to 15 points. If he manages to improve by that many lengths, he will contend for the win.

Cost Average is the top choice, especially at 6-1. This is one of those rare instances where the public figures to ignore the Pletcher/Velazquez combination.

As stated in a lengthier post, Ten for Ten hits the mark in two categories relating to wet dirt and the demanding nine-furlong distance of the Remsen Stakes (G2).

Ten for Ten owns an eight-length win from breaking his maiden on slop. The experience gives him an advantage because of the expected rain at Aqueduct on Saturday.

Also, the bottom side of Ten for Ten’s pedigree is clearly tilted towards longer routers. His dam Summer Vacation is half-sister to known stamina runners such as 2017 Marathon Stakes (G2) winner Destin, the reigning Personal Ensign Stakes (G1) winner Vexatious and Creative Cause, fifth by three lengths in the 2012 Kentucky Derby.

Assuming Ten for Ten is not the favorite, he is a decent play.

There is a case for the 3-year-old King Guillermo to defeat Performer.

For one, King Guillermo shows a 119 TimeformUS Speed Figure for his Tampa Bay Derby (G2) win and a 120 for his runner-up finish in the Arkansas Derby (G1).

Those figures fall six or seven points low in comparison to what he needs, but consider that King Guillermo ran those numbers as a 3-year-old in the spring. It is reasonable to believe King Guillermo is capable of a 125+ speed figure at this point.

In terms of pedigree, King Guillermo is related to a notable wet track winner. His second dam is Slow Down, the dam of 2018 Pat Day Mile (G3) winner Funny Duck. It is notable that Funny Duck won the Pat Day Mile over slop and barely could stand on fast dirt. In his nine starts following the upset score in the Pat Day, which included some turf starts, he never won again.

King Guillermo owns enough speed to either set the pace or take up a pressing or stalking position early on, putting him out of a situation where he takes mud anyway.

The layoffs bring up soundness concerns, as well as skipping the Kentucky Derby. Regardless, King Guillermo is the top choice.