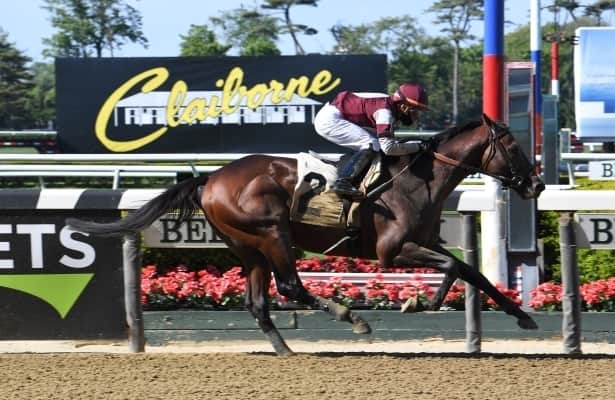 Siblings of famous horses do not present a good betting opportunity often because most racing fans know the family. But, maybe there are good reasons to play Justify’s half-brother Stage Raider in a Saturday double connecting a Belmont optional claimer with the Grade 3, $100,000 Soaring Softly Stakes.

Here is a short look at each race.

In his Gulfstream effort on March 5, Stage Raider stumbled at the start and soon became shuffled back to the rear. From there, he ate dirt in the back and made only a mild move on the turn to pick up fifth.

Then in his Keeneland race on April 13, Stage Raider had to chase an uncontested pacesetter in Buck Moon, who set off comfortable fractions of 23.92 seconds, 48.56 seconds and 1:13.24 for the one and one-sixteenth miles. To his credit, Stage Raider tried hard in the stretch and lost by 1 1/2 lengths.

For the runner-up Keeneland effort, Stage Raider earned a career-high 116 TimeformUS Speed Figure on fast dirt, which surpasses the 110 he earned when breaking his maiden at Keeneland last year over slop by 10 3/4 lengths.

Buck Moon went on to finish a decent third by 2 1/2 lengths in a high-quality May 13 optional claiming race at Churchill Downs, with good horses such as Twilight Blue and Masqueparade making up the exacta.

Stage Raider does need to face his talented stablemate Highly Motivated in this race, and he exits a disappointing loss off a long layoff as well. But the good news is that Stage Raider possesses slightly more early speed than Highly Motivated, and that should help him with his position.

On the morning line, Stage Raider offers more value as well at 3-1.

Stage Raider is the choice.

Haughty stands out as the class filly after finishing third in the Breeders’ Cup Juvenile Fillies Turf. She also broke her maiden “twice” before that race.

In Haughty’s career debut at Belmont on Sept. 17, she crossed the wire by an impressive 3 1/4 lengths before getting disqualified to third. Haughty’s second try in a maiden race resulted in a four-length win at Keeneland on Oct. 17. Remember that three or four lengths are dominant margins on turf because of the nature of how turf races run.

Is seven furlongs too short for Haughty? She did break her maiden at the one-mile distance at Belmont, which at least gives her successful experience at this racetrack. Although the slight cutback remains a minor concern, Haughty probably can handle it.

Haughty is 5/2 on the morning line. Those odds seem too good.

Derrynane and Chardy Pardy are 7/2 and 9/2 on the morning line, but neither of them own experience past 5 1/2 furlongs. Derrynane shows five starts at 5 1/2 furlongs or less, which indicates trainer Christophe Clement saw a sprinter in her physically when he first started training the filly. As for Chardy Pardy, she broke her maiden at 5 1/2 furlongs and makes only her second career start here for trainer Wesley Ward.

Haughty is the most reliable choice. Even though Haughty’s odds are likely to drop a bit because of her good finish in the Breeders’ Cup, as well as the Brown and Prat combination, she is the confident single.