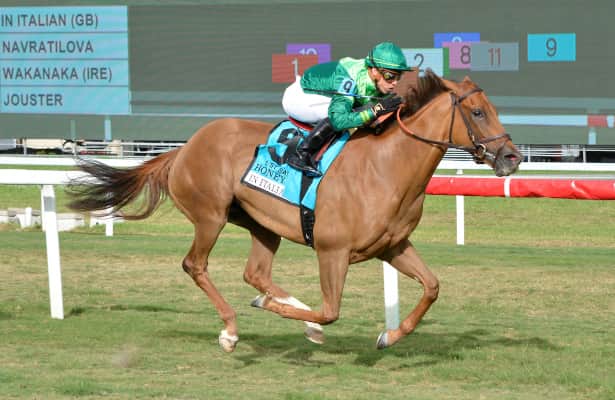 Get Paddock Prince picks for Keeneland

Looking ahead to the Grade 1, $600,000 Breeders’ Futurity at Keeneland on Saturday, there are sound reasons to not trust the favorite Forte, who won the Hopeful Stakes (G1) at Saratoga over the slop.

Below are two selections to use against Forte in the Breeders’ Futurity. First though is a short discussion of the Grade 1, $750,000 First Lady Stakes and a hard single for the race. The two stakes races fall next to each other on the loaded card, giving bettors a nice double opportunity.

In Italian brings an abundance of speed and talent into this race for trainer Chad Brown. About two months ago, she led the field from gate to wire in the Diana Stakes (G1) at Saratoga. Now she cuts back to one mile, which is likely a better distance for her even if she lost the Just a Game Stakes (G1) at Belmont.

Before getting too negative on In Italian’s effort in the Just a Game, consider that she had to chase a run-off pacesetter named Leggs Galore through the early stages. Leggs Galore went on a suicide mission while setting blazing fractions of 22.25 and 45.53 seconds before fading away to last.

Because In Italian ran about a length off Leggs Galore in the Just a Game, she also ran too fast early on and faded to third late. Regal Glory made a nice stretch move to win, but she took advantage of the pace.

In this spot, the only way In Italian could face a bad pace scenario is if the Brown entries all decide to duel each other. Unless Technical Analysis and Regal Glory want to get burned, In Italian will set the pace alone.

In Italian is the single.

To address the favorite Forte first, it makes no sense to take him as the favorite on top in his route debut after his big win came over slop. The question of whether he could duplicate the Hopeful effort on fast dirt remains, and even if he did, his 107 on TimeformUS is not that fast.

Loggins and Instant Coffee are two interesting colts from the Brad Cox barn. Cox does not tune his 2-year-olds to run their best at first asking, which makes both runners intriguing as they make their second starts.

In the case of Loggins, the son of Ghostzapper broke his maiden in a six-and-a-half furlong sprint at Churchill Downs on Sept. 17 by 8 ½ lengths after stalking the pace. Florent Geroux did noticeably ask him in the stretch by experimenting with the whip, but to the credit of Loggins, he responded well and opened up on the field in an impressive debut.

Loggins earned a 108 TimeformUS Speed Figure for the maiden win, which is already one point better than Forte’s best figure on that brand.

As for Instant Coffee, he needed to battle a runner named Arthur’s Run in the stretch run of a seven-furlong maiden sprint at Saratoga on Sept. 3.

Instant Coffee did prevail by 3/4 length. At first glance, that sounds like a boring margin. But also note the five lengths between Arthur’s Run and the third-place Crupi, as well as the 6 1/2 lengths between Dubyuhnell in fourth and the fifth-place Briterdayzahead. The first five horses were spaced out, and that is a good sign in most cases.

Even though Instant Coffee only earned a 103 TimeformUS Speed Figure for the win, the son of Bolt d’Oro can certainly improve on that number here.

Luis Saez takes the mount on Instant Coffee, and that is a plus as well.

Both Loggins and Instant Coffee are great options for the second leg of the double with In Italian singled in the First Lady.