Saturday Plays: Stephen Foster card is in the spotlight 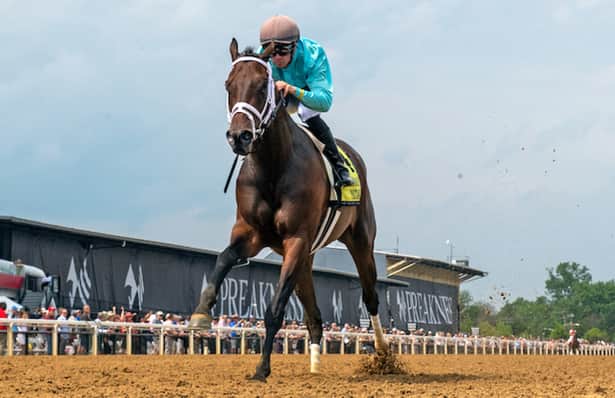 This week, the new theme is the exacta wheel. Down below are two exacta key wheels for the Grade 2, $350,000 Fleur de Lis Stakes and Grade 2, $750,000 Stephen Foster Stakes on a stakes-filled Saturday afternoon at Churchill Downs.

First though, here is a straight exacta for the $200,000 Tepin Stakes.

Only a few weeks ago, Wicked Halo won the local seven-furlong Leslie’s Lady Overnight Stakes by 2 1/4 lengths over the heavy favorite Pretty Birdie. Judging by how she opened up on Pretty Birdie in the stretch and finished the race strongly, Wicked Halo should enjoy one mile.

Pedigree-wise, Wicked Halo has mostly stamina blood. As stated before on this blog, Wicked Halo’s dam Just Wicked is a full sister to My Miss Lilly, the 2018 Gazelle Stakes (G2) winner at nine furlongs. Also, the damsire Tapit has sired four Belmont Stakes winners in his stallion career after initially being thought of as a miler influence by the public.

Wicked Halo earned a 115 TimeformUS Speed Figure for the Leslie’s Lady win and only needs to repeat the figure in order to beat this field.

For the runner-up spot, Heartyconstitution looks like the logical option. In her most recent start, she ran a good second to Falconet in a local optional claimer. After two wins in three starts for trainer Todd Pletcher, the well-bred Falconet may develop into a stakes filly soon.

Two starts ago, Heartyconstitution could only manage to finish sixth in the Fantasy Stakes (G3) at Oaklawn. With the exception of Wicked Halo though, the rest of this field probably would not fare better than she did.

Wicked Halo over Heartyconstitution is the play.

After Shedaresthedevil blew an uncontested lead twice in two starts this year, taking the 5-year-old mare as the favorite here is a bad idea.

Pauline’s Pearl beat Shedaresthedevil in the La Troienne Stakes (G1), but then she went on to finish fourth in the local ungraded Shawnee Stakes. In fairness, Pauline’s Pearl was herded in the stretch by Ava’s Grace. But it still feels disappointing that she failed to hit the Top 3.

How about taking Super Quick instead? This is a 4-year-old filly in career best form after two quality efforts in a row at the Grade 3 level.

Cross out Super Quick’s poor return off the layoff at Fair Grounds. After she faded in that race, Super Quick ran a close third to Malathaat in the Doubledogdare Stakes (G3) at Keeneland and then blew out the field in the Allaire DuPont Distaff Stakes (G3) at Pimlico by 14 1/4 lengths.

On the negative side, Super Quick might need the lead. But even though Shedaresthedevil and Ava’s Grace possess speed, Super Quick is faster and could open up on those two pace rivals before they can pressure.

Now to beat Shedaresthedevil and Pauline’s Pearl for the runner-up spot.

Given her third in the La Troienne and second in the Shawnee, Ava’s Grace may find a way to outfinish Shedaresthedevil and Pauline’s Pearl.

If not Ava’s Grace, the Shawnee winner She’s All Wolfe could pass tired horses in the stretch and pick up the runner-up position at a price.

In his last three starts, Olympiad has won Mineshaft Stakes (G3), New Orleans Classic Stakes (G2) and Alysheba Stakes (G2) by using his mild speed to sit close in a tracking position and take over on the far turn.

Judging by the pace scenario in this race, Olympiad is likely to receive the same preferred tracking trip. From the rail, Caddo River must go for the lead in order to avoid getting boxed into the pocket. From Post 3, Olympiad can easily settle into a tracking spot right off of Caddo River.

Olympiad does not face an easy task in challenging Caddo River on the far turn, but he should gain the advantage, especially if Caddo River struggles at nine furlongs. Last year, Caddo River faded to second in the nine-furlong Arkansas Derby (G1) after setting the pace under pressure.

Besides challenging Caddo River, Olympiad needs to hold off Americanrevolution and Mandaloun in the stretch run.

Americanrevolution did not perform great in his flat fourth-place finish in the Blame Stakes. Even though Americanrevolution could improve on that effort in his second start back off the layoff, there is also a slight concern he does not like Churchill Downs. Does he prefer New York?

Mandaloun returns in this spot after the hard trip to Saudi Arabia back in February. For some reason, Mandaloun did not show up with his usual effort in the Saudi Cup and ended up a dismal ninth by 18 3/4 lengths.

Maybe a longshot can beat Americanrevolution and Mandaloun for second.

Why not consider Proxy? Proxy finished second and almost two lengths ahead of Americanrevolution in the Blame. He could outkick him again.

Last Samurai is an interesting runner who improves at nine furlongs or longer. In his last start, he won the Oaklawn Handicap (G2) by four lengths. If he can overcome the outside post, then he can hit the board.

At 10-1, Caddo River is not a bad option to use in second either. He might last longer than most people expect and end up battling Olympiad until midstretch. When Caddo River secures the lead, he finishes strong.

Olympiad is the key over those three horses.