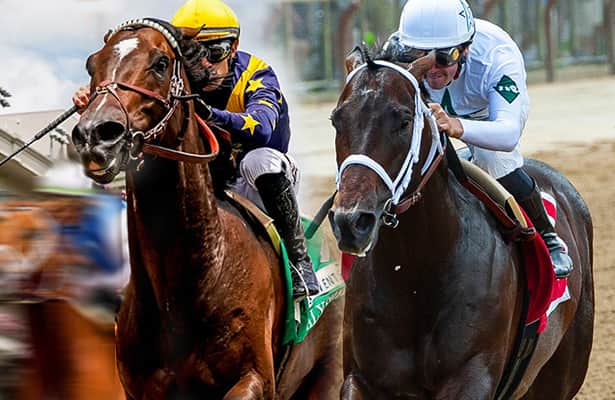 Despite the small field of six horses, handicapping the Grade 1, $1 million Whitney Stakes at Saratoga and deciding on a final bet took some time. While the scenario of Life Is Good sprinting to an uncontested lead and never giving it up could happen, that is not the only possible outcome.

The best horse to use instead of Life Is Good is Olympiad and he offers a slightly better bargain at 2-1 on the morning line, rather than 6-5. Olympiad will be keyed in a double connecting to the Saratoga Derby (G1). To back up the double, a win bet on Olympiad is also useful.

Here are the selections by race. The two bets are listed after the Whitney section.

With Hot Rod Charlie wearing blinkers, he is expected to either press Life Is Good or attempt surprise tactics by gunning for the lead. If Hot Rod Charlie makes an aggressive move for the lead at the start, the two of them may hook up in a grueling speed duel that will compromise both of their chances.

Olympiad should settle in a perfect stalking position in third. Assuming Hot Rod Charlie does most of the work in pressuring Life Is Good, Olympiad can take advantage of the situation and make his usual move on the far turn.

From a TimeformUS Speed Figure perspective, there is no difference between Olympiad and Life Is Good. Olympiad posted a 136 when winning the Stephen Foster Stakes (G2), while Life Is Good earned a 135 in the John A. Nerud Stakes (G2) and 134 in the Pegasus World Cup Invitational (G1).

On Beyer Speed Figures from the Daily Racing Form, Olympiad’s 111 from the Stephen Foster matches Life Is Good’s 112 and 110 in the John A. Nerud and Pegasus World Cup.

Given the slightly higher odds at 2-1, Olympiad is the right horse.

Even though Classic Causeway performed well in his Belmont Derby (G1) win, he had the benefit of Emmanuel scratching before the race. Emmanuel is entered again though and does not figure to mysteriously scratch this time. Plus, there is another speed horse in Main Event, who drew the rail.

Classic Causeway won the Belmont Derby at 26-1. The common rule in betting is to not chase a recent longshot winner in his next start. In other words, try to catch the wedding if possible, but miss the funeral afterwards.

The Saratoga Derby is evenly matched overall. With such a big cluster of horses closing in the Belmont Derby, it feels hard to separate them. The right strategy for this double is taking some longshots to use with Olympiad.

Grand Sonata, Royal Patronage and Sy Dog all finished well enough in the Belmont Derby without winning. In the case of Royal Patronage, he initially tried to press Classic Causeway hard through a hot opening quarter in 23.55 before the two of them turned down the tempo a bit and came back to the field. All three of those runners are in the double-digit range on the morning line.

Those are the longshots to use with Olympiad keyed in the first leg.