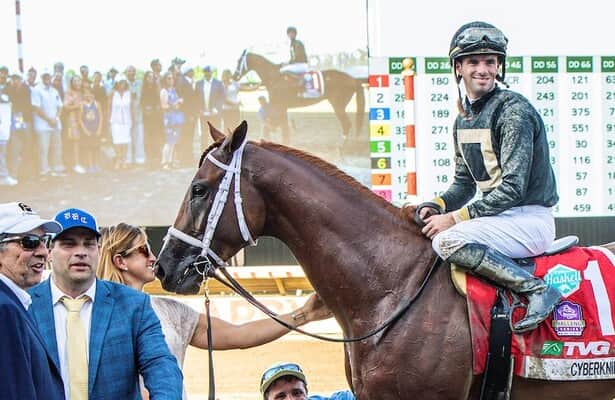 When a heavy favorite starts at a lower price than the horse that beat him in their previous meeting, the latter is usually a value play. This pattern often happens in big stakes races where bettors favor fan favorites, even if they do not earn their role as favorite.

In the Grade 1, $1 million Pennsylvania Derby on Saturday, Taiba starts as the morning line favorite despite losing to Cyberknife cleanly in the Haskell Stakes (G1). Therefore, it only makes sense to take Cyberknife for a repeat.

Here are doubles options for the Cotillion Stakes and Pennsylvania Derby, as well as spot plays for the Dogwood Stakes (G3) card at Churchill Downs.

Secret Oath starts the class of the field due to her Kentucky Oaks win in May and recent runner-up finishes in the Coaching Club American Oaks (G1) and Alabama Stakes (G1) at Saratoga. The speed figures might seem stagnant, but she does get a break by getting away from the exceptional Nest.

Green Up also deserves consideration off her recent win in the local Cathryn Sophia Stakes that came up fast on the speed figure scales. She won by 3 ¾ lengths over the Grade 2-level filly Interstatedaydream while earning a big 120 TimeformUS Speed Figure. This is a developing star for Todd Pletcher.

If the odds on either Secret Oath or Green Up become too low, then Adare Manor is a worthy substitute, or even a third option for longer bets. Jockey Mike Smith will probably send Adare Manor to the lead, and she might stay.

Cyberknife got stuck in traffic on the far turn of the Haskell Stakes, while Taiba had the luxury of winding up his run on the outside and gaining momentum. Yet, Cyberknife found a path inside and rallied strongly to win. Cyberknife overcame adversity and ran a better race than the margin indicates.

One race later, Cyberknife set the pace in the Travers Stakes (G1) and finish second to Epicenter, the division leader. Despite getting tired, Cyberknife ran well to hold off Zandon and Rich Strike late.

If Cyberknife starts at higher odds than Taiba, then Cyberknife is the value.

Falconet might get loose on the lead for trainer Todd Pletcher.

However, Turnerloose figures to settle in a great spot behind Falconet around second or third. Turnerloose also shows more class as the Rachel Alexandra Stakes (G2) winner from earlier in the year. In addition, Turnerloose did not run poorly in the Kentucky Oaks either, with a seventh-place finish out of 14 fillies while earning a 109 on TimeformUS.

Forget about Turnerloose’s recent flop at Kentucky Downs on turf. She can rebound on the move back to dirt against a weak field in this spot.

Echo Zulu enters this race off a 141-day layoff. Although Echo Zulu shows five workouts since Aug. 17, the first two of them were slow four-furlong workouts in 53.64 and 52 flat. Only the last three works seem more serious.

In contrast, Echo Zulu’s stablemate Wicked Halo makes her seventh start of the year and enters in improving form after three straight wins culminating in the Prioress Stakes (G2) at Saratoga. At the beginning of the streak, Wicked Halo also beat the fast Pretty Birdie in the local Leslie’s Lady Stakes.

Wicked Halo’s best TimeformUS figure is 115, which is the same as Echo Zulu’s best speed figure on that brand. If two fillies show the same speed, choosing the one with value makes sense, especially if the other is running off a layoff.

Warrior Johny faced a difficult scenario in a local optional claiming race on July 4 when a run-off pacesetter set suicidal fractions early on. By the time Warrior Johny moved closer to the lead on the far turn, he was already tired.

In Warrior Johny’s next start at Saratoga, he improved a ton by winning a nine-furlong allowance race by a surprising 8 ½ lengths over older horses. He earned an impressive 121 TimeformUS Speed Figure for that big win.

Home Brew could only finish fourth in the West Virginia Derby (G3), but he faces easier opponents now and projects to settle in a good stalking trip. Two starts ago, Home Brew won the Pegasus Stakes at Monmouth by 6 ½ lengths.