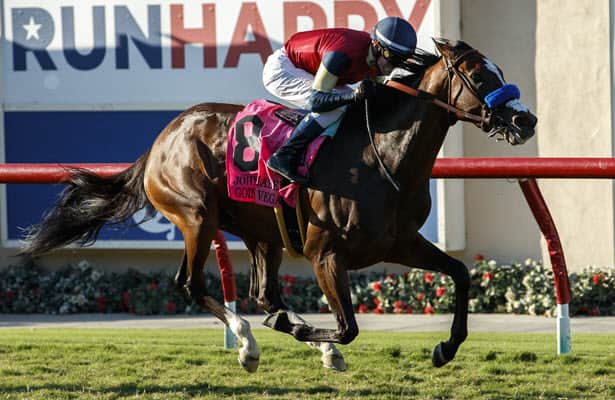 Get Power Picks for Del Mar

The Bob Baffert-trained Home Cooking is listed as the 9-5 morning line favorite for the Del Mar Debutante. Judging from some other public selections, she might get bet down even further. Is she worth the hype? Based on Home Cooking's impressive maiden romp, the answer is yes.

When Home Cooking made her career debut, she set the pace in a local July 31 maiden sprint and faded to third after a 21.44-second opening quarter and 45.19-second half-mile. The winner Justique took advantage of the pace and closed for the win, but at least she looks promising as well.

Home Cooking made amends when made use of stalking tactics in an Aug. 21 maiden race. She took control of the lead on the turn and blew away the rest of the fillies this time by 9 1/4 lengths with a field-high 97 TimeformUS Speed Figure.

From a visual standpoint, it is important to note how Mike Smith stops riding Home Cooking in midstretch. She powers home under her own volition and gives the impression of holding plenty more in the tank.

Yes, the hype is strong. Nevertheless, Home Cooking gives the impression of another buzzsaw from the Baffert barn. If she starts at even-money, that is fair.

Back in May, Going to Vegas held off Going Global in the stretch run of the Gamely Stakes (G1) at Santa Anita as Ocean Road went by both of them.

Going Global went on to capture the local Yellow Ribbon Stakes (G2) by three lengths and figures to start as the favorite in this spot at low odds.

Why not take Going to Vegas at slightly higher odds? She already held off Going Global in the Gamely. After sitting on the bench since the runner-up Gamely effort, Going to Vegas makes her second start for new trainer Philip D’Amato and now gets the services of Flavien Prat too.

According to TimeformUS, D’Amato hits at a healthy 22 percent off 77-129 day layoffs out of 45 starts. This mare should feel ready to run.

Going to Vegas works as a single with Home Cooking.

After throwing a clunker in the Beaugay Stakes (G3), Stolen Holiday made amends in the Eatontown Stakes (G3) at Monmouth Park on June 18.

According to TimeformUS Pace Projector, the pace is supposed to run slow in the Ladies Turf Stakes with Dalika securing an uncontested lead and Stolen Holiday in second. Perhaps Stolen Holiday can apply some pressure though, while still keeping a moderate enough tempo.

At 7/2 or higher to compensate for the lack of experience at Kentucky Downs, Stolen Holiday is a good win bet. If she goes lower, then think twice about the bet or only using her as a backup in multi-race wagers.

Arklow loves this course and certainly knows this particular race. The 8-year-old horse won the 2018 edition of the Kentucky Turf Cup (G3) before finishing second in 2019. Then Arklow won this race again in 2020 and ran second in 2021.

In last year’s edition, Arklow had some traffic problems late in the race. He did not get to fully stretch out his legs until near the wire when it became too late.

With Florent Geroux hopping back aboard, he might get this horse stuck in traffic once again. The two of them did not gel well together in more races than this one last year. But if Arklow can somehow get a clear trip, then his fondness for the course will give him the advantage over the other horses. Geroux gets one more chance to give him a good ride.

Since Gufo is in the field too, demand a value price on Arklow before biting.