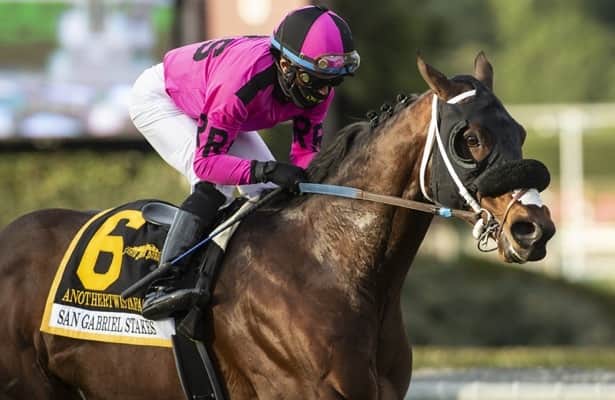 Anothertwistafate in the Pegasus Turf highlights the undercard selections, as he enters off a strong victory at Santa Anita and brings useful tactical speed. Overall, four undercard stakes races are covered, and a repeat explanation of the top Pegasus World Cup pick is below as well.

Here are the picks.

After losing form last summer, Shivaree has been progressing after taking FTBOA Marion County Stakes at Tampa Bay in his second start off the bench.

If Shivaree can cycle back to his spring and summer form from last year, or even improve upon it, then he is capable of leading this field from gate to wire.

Vigilantes Way enters this stakes race with an ultra-consistent record of 8: 4-1-2. In turf races only, she also sports a a great 4: 2-1-1 record.

Her most recent turf win came last month in the local Tropical Park Oaks by 2¼ lengths after setting the pace, which is arguably a dominant margin. As stated before in old posts, two lengths means more on turf than on dirt.

Forgive the third-place finish in the Winter Memories Stakes at Aqueduct on Nov. 15. Duopoly set a slow and uncontested pace, making her invincible late.

Also forgive the runner-up in the Hilltop Stakes on Oct. 3. Vigilantes Way came flying at the end when set in the clear, but Evil Lyn had better position. For some reason, Vigilantes Way began that race 6½ lengths behind.

In most races, Vigilantes Way owns enough speed to set the pace or press. Expect her to utilize that natural speed again under Julien Leparoux. If she is leading or in close range, then it will prove tough for any filly to outkick her.

Cinnabunny suddenly forget she had speed in her debut for trainer Brad Cox in the local Sugar Swirl Stakes (G3). In the stretch run though, Cinnabunny closed nicely into the leading group for a close third. With a more clear path in the stretch, she was likely capable of winning.

On paper, Cinnabunny’s running line in the Sugar Swirl represents a Z pattern, which means she lost ground and came on again late.

According to TimeformUS Pace Projector, Cinnabunny is expected to contest the pace in this race through slow fractions with Pacific Gale, who is not a huge threat. If that is indeed the scenario, then Cinnabunny is supposed to handle her.

Irad Ortiz Jr. stays on for another try after the closing third-place finish last time, which means he must see some talent in this filly.

Anothertwistafate took the San Gabriel Stakes (G2) at Santa Anita in a strong enough manner to take him seriously in this spot.

After tracking the uncontested leader Bob and Jackie, Anothertwistafate made his move gradually on the far turn and met the pacesetter in the eye, before drifting out slightly at the top of the stretch. Once straightened out though, he began to pull clear powerfully and won by 2¼ lengths.

As stated above, two to three lengths means more in turf racing than on dirt, which means Anothertwistafate dominated the San Gabriel.

From Post 8 in this spot, Anothertwistafate projects to secure a perfect pressing trip right off Storm the Court, who is not a crazy speed type. If the two of them set moderate fractions, Anothertwistafate can put him away and create some separation at the top of the stretch, before holding on.

When trainer Peter Miller enters a hot horse, it is wise to not ignore him. According to TimeformUS, he also wins at a 21 percent clip with jockey Joel Rosario.

Anothertwistafate is the top choice.

First of all, Tax is drawn well in Post 7. He can secure a tracking or stalking position in the clear and hope that Knicks Go fails to handle the nine furlongs.

Tax himself owns successful experience at nine furlongs, as shown by his wins in the 2019 Withers Stakes (G3) and Jim Dandy Stakes (G2).

Also, Tax made a strong return last month in the Harlan’s Holiday Stakes (G3) over this course, winning by 4½ lengths after setting the early pace. Perhaps getting ready for the Pegasus locally gives him an advantage this time. Last year, Tax was a strong second in the Discovery Stakes (G3) at Aqueduct before coming to Florida and throwing in a clunker in last year's Pegasus.

Luis Saez taking the call is a positive as well.

Bettors should forgive Tax’s Pegasus flop last year and expect a better effort. With most of the attention of Knicks Go, he might offer value.