Saturday Play: This filly can beat Baffert trio in Starlet 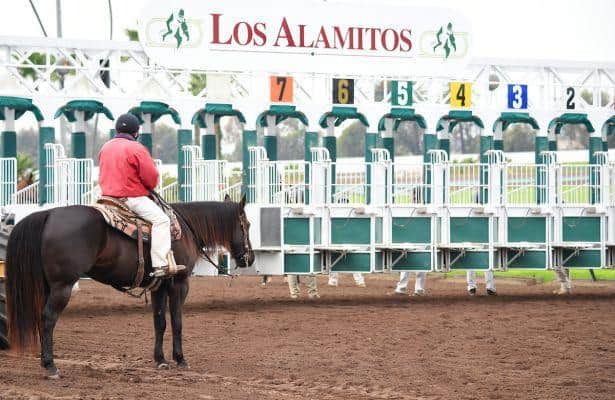 With three Bob Baffert-trained fillies present in the Grade 1, $300,000 Starlet Stakes at Los Alamitos, the winning trainer might seem like a forgone conclusion. But the race contains at least one more talented runner trained by Baffert’s former assistant Tim Yakteen, and she deserves a long look.

Get suggested wagers with Super Screener

Yakteen starts Blessed Touch, a daughter of Girvin who shows one maiden win and one runner-up finish in a stakes race in three career starts.

Blessed Touch gave everyone a view of her talent by winning a six-furlong maiden race at Santa Anita on Oct. 8 by 8 3/4 lengths with a 114 TimeformUS Speed Figure, which is a huge figure for a 2-year-old filly to earn in October. But in her next start, she let a closer pass by her in the local Desi Arnaz Stakes.

She lost to Justique, who had generated hype herself after an impressive Del Mar maiden win on July 31. After her successful career debut, Justique went on to finish third in the Chandelier Stakes (G2), before closing for the win against Blessed Touch in the Desi Arnaz.

Besides the quality of Justique, why does Blessed Touch deserve a pass for the loss? TimeformUS labels both of the opening fractions of 22.04 and 45.05 in the Desi Arnaz pace as fast, and Blessed Touch sat only about a length off the leader through the opening quarter and half-mile.

With Blessed Touch sitting close to a fast pace, she posted a blazing opening 145 TimeformUS Pace Figure before slowing down a bit.

Despite slowing down from that 145, Blessed Touch hung tough in the stretch and lost to Justique by only 2 1/4 lengths, which is not a bad effort at all given the heated early pace and Justique’s own talent.

The only question is whether Blessed Touch can handle the stretchout to a two-turn route. As a word of caution, most Girvin progeny do not perform well in routes races, at least not now. Perhaps it is too early to say for sure though, as Girvin is currently a new sire in racing.

Even though Blessed Touch has sprint blood on top, the bottom side of his pedigree does show some route influences. His first dam Blushing Touch is a half-sister to Bryan’s Jewel, the 2013 Obeah Stakes winner at nine furlongs. Also, Touch Gold is the sire of the Blessed Touch’s second dam Saphira.

Trainer Tim Yakteen does not win big races often, but he also does not get as many talented fillies such as this one. With the right horses, most trainers can turn their career around and get into the spotlight. Yakteen guided Taiba to victory in the Santa Anita Derby (G1) last year before a disappointing finish in the Kentucky Derby. Afterwards, he gave Taiba back to Baffert.

Why is the Baffert-trained Faiza a bad play in this race?

Faiza broke her maiden easily on Nov. 12 at Del Mar by 3 ½ lengths after pressing a regally bred daughter of Beholder through the early stages and putting that filly away on the turn. Based on that effort, she starts as the favorite. But she lacks any experience in two-turn routes.

The old rule of avoiding the heavy favorite trying something new pops up when going over Faiza's form and expected odds. She is also a daughter of Girvin.

As for the other Baffert runner, Doinitthehardway, she did improve when stretching out to a one-mile route for the first time on Nov. 25 at Del Mar and only lost by one length to the stakes-experienced Ice Dancing after chasing her closely throughout the entire race. However, both Ice Dancing and Doinitthehardway took advantage of a blatant speed bias.

The third Baffert filly in this race, Fast and Shiny, does not seem fast enough. Perhaps Baffert intends to use the filly as some kind of rabbit. Notice she sports the exact same ownership team as Doinitthehardway.

Faiza is usable in multi-race wagers as a backup.

For the win and place bet though, Blessed Touch is the right filly.