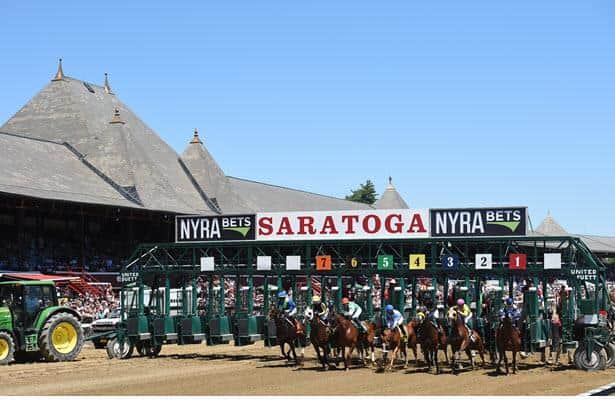 Last Sunday, the blog choice and first-time starter Shipsational dominated the first race on the card by 6 3/4 lengths to win at first asking over the slop. Shipsational paid only $6.20 to win, but the straight $1 exacta with the blog second choice Silver Samurai paid a healthy $10.

On Wednesday, Saratoga hosts the $100,000 Rick Violette Stakes for 2-year-olds bred in New York, as well as an open maiden race for 2-year-old fillies and a nine-furlong optional claiming race featuring the return of older horse Forza Di Oro and also the third start of the year for Highest Honors.

Here are picks for those three Saratoga races.

Coinage makes the third start of his career after finishing third to Barese on May 21 at Belmont Park in a five-furlong maiden race and breaking his maiden on June 17 by 7 3/4 lengths while stretching out to 5 1/2 furlongs.

The runner-up in the latter race was Silver Samurai, who faded to second by 6 3/4 lengths against the impressive debut winner Shipsational only a few days ago.

Coinage is likely to appreciate the continued stretchout to six furlongs as a son of Tapit out of a former Breeders' Cup Filly & Mare Sprint champion in Bar of Gold, who switched between sprinting and routing during her career. There is rain in the forecast, and Bar of Gold shows great wet dirt performances in her record, including an 18-length romp over slop in the 2016 Empire Distaff Handicap. In all likelihood, Bar of Gold will pass her affinity for wet dirt to Coinage.

In terms of works, Coinage posted a four-furlong bullet in 47.4 seconds at Belmont on July 5, which was the fastest four-furlong time out of 140 horses that morning.

As for the challenge of facing Barese again, where has Barese been after defeating Coinage on May 21? He did not race in June and displays only one workout in that month and one workout in July. Unless there are missing works to uncover, the pattern is suspicious from a handicapper's view.

To give him one major positive, Barese's bloodlines reveal stamina as the dam Right Prevails is a full sister to 2005 Kentucky Derby runner-up Closing Argument. Barese could win, but it is hard to overlook the spotty worktab.

The filly Ready A. P. is a contender after breaking her maiden easily against other New York-bred fillies by 8 1/4 lengths on July 1. Forget about the low speed figure as these horses are still learning the sport.

Ready A. P. also is capable of moving forward. Even though facing males is tougher than running against females, it is not unusual at this age.

Regardless, Coinage is the more experienced runner with two starts already in tow and figures to love the mud or slop, given the pedigree.

If it rains, then single Coinage. On fast dirt, think about using all three.

Assuming Mystic Eyes draws in off the also-eligible list for trainer Todd Pletcher, then she is the one to choose, based on a win-early pedigree and steady worktab. Given the possible rain and the fact that more scratches occur in wet weather, she might get enough scratches to draw in off the list.

Mystic Eyes’ sire Maclean’s Music already is widely known as a win-early influence. Her dam Cloudburst is a half-sister to Boston Harbor. Boston Harbor rose to the top of 2-year-old division quickly by winning his first two starts in 1996, including the Bashford Manor Stakes (G3). He went on to capture the Kentucky Cup Juvenile Stakes (G3), Breeders’ Futurity (G2) and Breeders Cup Juvenile in the fall to complete a magical season.

With only five workouts on record, it is probable that Pletcher sees enough talent to put Mystic Eyes out there and start winning now.

If Mystic Eyes fails to draw in, then think about using the second- and third-place fillies from Mainstay’s June 4 maiden romp at Monmouth, Next Tuesday and Morning Matcha. For those who do not remember, Mainstay ran second in the opening day Schuylerville Stakes (G3).

Next Tuesday is a threat to wire the field, while Morning Matcha might appreciate the stretchout to 5 1/2 furlongs for the underrated trainer Robert Reid Jr.

If it rains, the rail entrant West Will Power is the most interesting choice, based on his 9 1/2-length win over slop in an April 10 Keeneland optional claiming race. Considering West Will Power’s sire Bernardini, it is no surprise he relishes wet dirt.

Forza Di Oro and Highest Honors are expected to attract most of the money, which means West Will Power might offer backers a value price, possibly higher than 3-1.

To be fair to West Will Power's dry track ability, he was fourth by only three lengths in the recent Salvator Mile (G3) at Monmouth over fast dirt, and his four other fast dirt efforts are decent enough as well. But if the rain fails to come, then consider taking Highest Honors, even at a low price.

Highest Honors made his return to the races off a 615-day layoff in an April 30 Belmont optional claiming race. He ran off the board in fifth, nine lengths behind the winner. Perhaps Highest Honor needed the race.

As expected, Highest Honors took a step forward on June 20 in another optional claimer with a 2 1/4-length win. He also went up on the TimeformUS scale by moving from a 103 return figure to a 117 in his second start off the bench.

In his third start off the long layoff, expect Highest Honors to move forward again at nine furlongs. Highest Honors is even usable on wet dirt, as he won the local nine-furlong 2019 Curlin Stakes on mud.

The main point in betting West Will Power instead is to get higher odds than the favorites with a horse close enough in ability. Odds and value aside, Highest Honors is a touch better than West Will Power.

If the track is dry, favor Highest Honors. On a wet track, West Will Power might find a way to beat him and Forza Di Oro as well.

The favorite Forza Di Oro makes his first start off a 235-day layoff for trainer Bill Mott, which probably makes him a poor bet. Yes, he could win, but it does not seem like a good idea to take him at low odds.