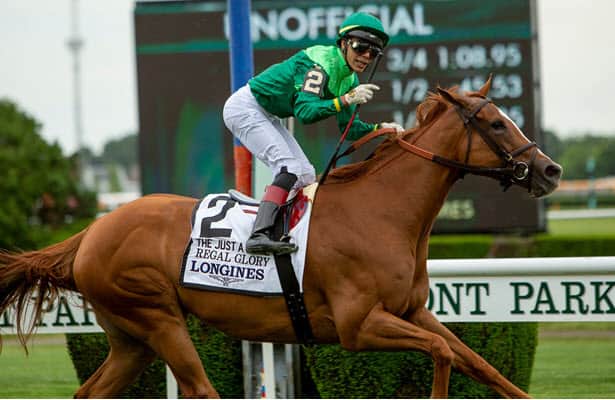 One of the more quiet win streaks in horse racing comes from the 6-year-old mare Regal Glory, who has won four in a row heading into a start against males in the Grade 1, $500,000 Fourstardave Handicap at Saratoga on Saturday. There is reason to believe she can keep the streak alive.

In most cases, a hot mare becomes popular with bettors and racing fans. She has been popular in terms of betting, but perhaps there is some kind of flaw that has kept her winning streak under the radar overall.

The most glaring weak point in Regal Glory’s four-race win streak is the weak competition she won against in the first two of those wins.

For example, in the Matriarch Stakes (G1) at Del Mar last December, Regal Glory won by 2 1/2 lengths over Zofelle in second, with another length back to Princess Grace in third and Regal Glory’s stablemate Viadera in fourth.

Zofelle and Princess Grace were not true Grade 1 runners. Viadera had won the 2020 running of the Matriarch, but she entered last year’s edition in declining form off a sixth-place finish in the First Lady Stakes (G1) at Keeneland. After failing to defend the Matriarch, Viadera retired.

Then in January, Regal Glory won the Pegasus World Cup Filly and Mare Invitational (G3) over another weak group with Alms in second and Shifty She in third. Considering the Grade 3 label, the soft competition was expected.

After the Matriarch and Pegasus World Cup Filly and Mare though, the competition in Regal Glory’s streak did start to look better on paper.

Over two months later in April, Regal Glory came back to win the Jenny Wiley Stakes (G1) at Keeneland by one length over her Chad Brown-trained stablemate Shantisara, who had won the Queen Elizabeth II Challenge Cup Stakes (G1) last October. The rest of the field was not great, but this time Regal Glory beat a legitimate filly in Shantisara, who had nearly seven lengths on the third-place Lady Speightspeare.

Two months later in June, Regal Glory won the Just a Game Stakes (G1) by an impressive 3 1/2 lengths over Wakanaka in second. The third-place In Italian, who is also Regal Glory’s stablemate, had chased the pacesetter Leggs Galore through blazing fractions to set up the race.

Regardless of the pace setup, Regal Glory finished the one mile in a fast 1:32 flat.

In Italian took the local Diana Stakes (G1) in gate-to-wire fashion in her next start to back up the quality of the Just a Game Stakes (G1).

This week, Regal Glory likely faces males in the Fourstardave Handicap. She certainly belongs with males if she runs. In Europe, good fillies and mares often compete in open Grade 1 races. In North America, the practice is more accepted in turf racing than on dirt, but it still generates discussion when it happens on turf.

Also, note the weak probables list for the Fourstardave. According to the HRN Stakes Tracker, she might face Front Run the Fed, Casa Creed, City Man, Get Smokin and Masen. None of those runners seem like turf monsters.

On paper, the Fourstardave looks like a great spot to give Regal Glory a new test. Regal Glory’s streak has been a bit underappreciated to this point. But if she defeats males, she will earn hype to her name – especially if the connections point the mare toward the Breeders’ Cup Mile.