Kentucky Derby 2023: Ranking the top 5 on the trail 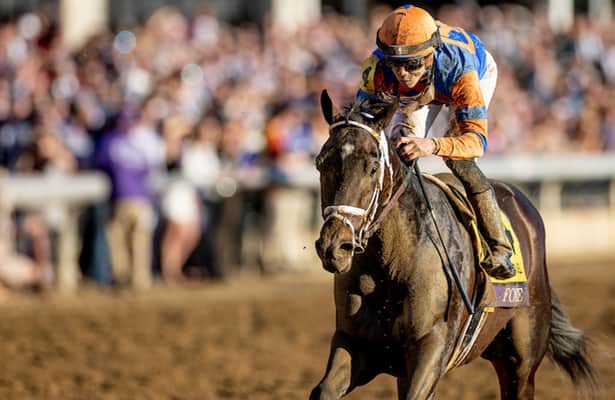 With the 2022 portion of the 2023 Kentucky Derby trail almost over, it has become clear which 2-year-olds are the best of the division at this point. When all the different regions came together in the Breeders’ Cup Juvenile at Keeneland, it made the picture easier to see, regardless of speed figures.

Here is one writer’s rankings of the best 2-year-olds on the current trail, including why each horse holds their spot and what they need to accomplish moving forward.

Right now, it seems almost indisputable that Forte is the best 2-year-old.

After his maiden breaker at Belmont, Forte did run one hiccup two months later in the Sanford Stakes (G3) at Saratoga by finishing fourth. But afterward, Forte became a Grade 1-winning machine by capturing the Hopeful Stakes (G1), Breeders’ Futurity (G1) and Breeders’ Cup Juvenile.

The interesting part is that Forte came into the Breeders’ Cup with lesser speed figures than the favorite Cave Rock. Yet Forte proved himself the better horse by tackling Cave Rock in the stretch and winning by 1 1/2 lengths.

Forte only needs to show he can continue to progress in maturity while handling the stretchout to nine furlongs when the time comes on the trail.

Loggins gets the second spot on this list because he arguably ran a better race than Forte in the Breeders’ Futurity, considering his initial pace work.

After running in third on the inside, Loggins moved to the lead and took all the heat as the inside speed, with Bourbon Bash pressing outside.

Loggins put the other speed horses away, but the fractions of 22.94 and 46.36 seconds were not easy ones. Now he needed to handle Forte in the stretch run. Although Loggins fought back, Forte did prevail by a neck.

Based on that effort, it is clear Loggins owns as much ability as Forte. Forte edges him out only because he went on to the Breeders’ Cup and won.

If Loggins can improve and handle the stretchout to longer distances, then he is a serious horse on the Derby trail. His early speed should help him.

Given his excellent speed figures, Cave Rock came into the Breeders’ Cup Juvenile with hype as one of the bulletproof horses after dominating wins in the Del Mar Futurity (G1) and American Pharoah Stakes (G1) out west.

But sometimes it is hard to tell which horses from different regions are best until they meet and race each other. Unfortunately for Cave Rock, he had no answer when Forte came with his challenge in the stretch.

Cave Rock had to settle for second in the end. To Cave Rock’s credit, he did all the early pace work by setting the pace under pressure from Hurricane J through fractions of 22.90 and 47.01 seconds before then shaking off his stablemate National Treasure and opening up temporarily.

In the future, Cave Rock might need to show he can rate once the distances get farther. Otherwise, stretching out with his pacesetting speed to nine furlongs or farther seems like a tall order if he receives pressure early on.

Also, Cave Rock will need to peak in April on the trail under a different trainer, because he shows no Derby points with trainer Bob Baffert suspended.

With that said, this colt obviously owns talent after placing in both of his Grade 1 attempts with only a maiden start before those races. Trainer Bob Baffert thought highly enough of National Treasure to send him to Keeneland rather than wait for the Los Alamitos Futurity (G2) at home.

National Treasure needs to show he can start winning races on the trail. If he places underneath in any more races, he might forget how to get the job done and only finish underneath, as some horses end up doing for their entire careers.

As with Cave Rock, National Treasure did not earn any Derby points for his efforts under Baffert. Ideally, he would switch trainers and win his final prep.

For now, Arabian Knight and Extra Añejo tie for the fifth spot until they showcase their talents in graded-stakes races. Do you  ever read Steve Haskin’s Derby blog? He normally hesitates to move maiden winners into his top 12 until they prove themselves in a points race.

The time for Arabian Knight and Extra Añejo to prove themselves will arrive soon. If they live up to expectations, then they will move forward on this list.