Promises Fulfilled a must-bet cutting back in Woody Stephens 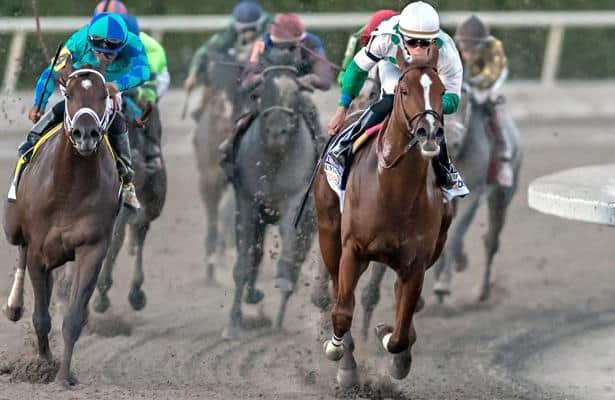 Despite the ugly running line from the Kentucky Derby, Promises Fulfilled will be one of the best bets of the Belmont Stakes day card when he competes in the Grade 2, $400,000, Woody Stephens Stakes. This horse is almost a lock to finish in the Top 3.

Of course, no horse is ever certain to finish anywhere. That's the nature of horse racing. But there are a few important angles working in Promises Fulfilled’s favor.

For starters, he is used to racing through a hard, fast pace.

Promises Fulfilled endured brutal Derby fractions including a 45.77 half setting the pace with Justify on his flank, giving him the ultimate “workout” in leading up to this race.

Other horses over the years who flopped in the Derby include Tom’s Ready, Trinniberg and Teuflesberg. Trinniberg set a fast Derby pace in 2012 with the talented Bodemeister chasing him, only to fade into the pack turning for home. Turning back to seven furlongs in the Woody Stephens, he led again and this time won.

Teuflesberg actually chased Hard Spun in the 2007 Derby and moved early into second, before fading like Trinniberg in the stretch run. In the Woody Stephens, he rebounded and took a different approach to winning by coming from behind.

The Derby to Woody Stephens angle is strong, and it provides value, too.

When bettors read the past performances and see Promises Fulfilled dropped to 15th by 39 lengths at Churchill, a good portion of them will be scared away. The double-digit loss in the Florida Derby will also give them concern. But neither of those flops should be held too harshly against him because of the pace. He is capable of better.

Furthermore, he does own two sprint wins already, a six-furlong maiden breaker at Churchill Downs and a seven-furlong allowance at Keeneland. Both wins were earned in his 2-year-old season, so disregard the speed figures.

For what it is worth, Promises Fulfilled is working sharply, too. I will never focus a whole lot on workout times, but it is noticeable two of his last three workouts are bullets, and the non-bullet ended up second best out of 25 at the distance.

Additionally, trainer Dale Romans is “Hot” according to TimeformUS, and the trainer/jockey combination of Luis Saez/Romans hits at 27 percent from 70 tries.

The other speed in this race is not a huge concern. World of Trouble is not fast enough to keep up with the speed lined up here. The Pace Projector puts Madison’s Luna, Pure Shot and Strike Power up front, but the first two horses never competed at a fast pace before. Both of them should fold quickly, if they make the front.

Strike Power is a legitimate threat to Promises Fulfilled, and as mentioned above he contributed to the Florida Derby meltdown with aggressive rail tactics.

Previously, he also finished second to Promises Fulfilled in the merry-go-round Fountain of Youth Stakes (G2) and won the Swale (G2) one month earlier at seven furlongs. This horse owns talent and a bright future.

Besides those two runners, bettors will want to look at Engage, who deserves mentioned for a 120 TimeformUS Speed Figure earned last time in the local and ungraded Gold Fever Stakes. Engage earned the 120 over a muddy racetrack, and never broke 105 before, which is somewhat of a concern.

If rain materializes at Belmont, then move Engage up. Otherwise, give him consideration because of the lethal Jose Ortiz/Chad Brown combination alone.

For an obvious choice, also glance at Kanthaka, who comes into this race off a win in the Laz Barrera (G3) at Santa Anita. He also won the San Vicente Stakes (G2) four starts ago when an epic meltdown helped him give a sharp closing run.

No one will be surprised if Kanthaka wins, nor will anyone receive a lot of value. He is a solid closer who will benefit if the pace becomes insanely quick.

For a viable mega longshot, throw in Givemeaminit as well, as he is a horse crying to be cut back to a sprint distance. After two failed attempts on the Derby trail in the Risen Star Stakes (G2) and Louisiana Derby (G2), he shortened up in the Pat Day Mile (G3) at Churchill and improved a little bit to third, beaten by just over five lengths.

Cutting back one more furlong should serve this sprinter even better, and at 30-1 on the morning line he can certainly blow up the trifecta and superfecta.