Preview: Baffert holds all the cards in Los Alamitos Futurity 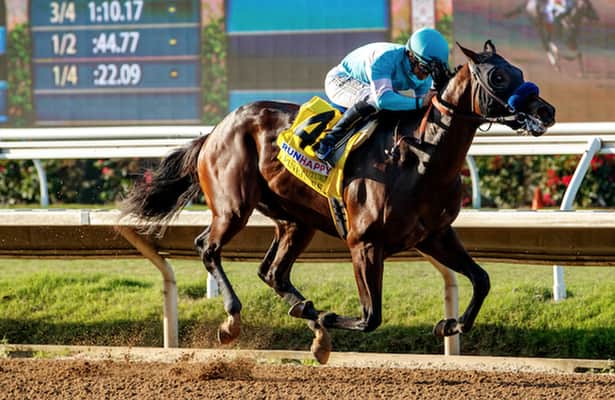 After the passing of Medina Spirit, it might feel too soon for some horseplayers to see another graded stakes field filled with Bob Baffert-trained runners. Yet, the Grade 2, $300,000 Los Alamitos Futurity on Saturday is trending in that direction, based on the initial probables list.

Based on the Horse Racing Nation list, trainer Bob Baffert trains five horses who are listed as either probable or possible. Doug O’Neill conditions the other two possible entrants. No other probables or possibles are listed.

Pinehurst, Enbarr and Rhetoric are the three probable Baffert entries, while Barossa and Messier are labeled as possible from his barn.

Pinehurst is the most well-known name out of the Baffert probables trio because he ran sixth in the Breeders’ Cup Juvenile and won the Del Mar Futurity (G1) in September. In contrast, Enbarr shows no graded-stakes experience in two starts, although he broke his maiden in the local Capote Stakes. As for Rhetoric, he is a maiden who made a closing bid to finish third in an Aug. 21 race at Del Mar before disqualification moved him to second.

Barossa broke his maiden at Santa Anita on Oct. 15, and then faded to a disappointing ninth in the Breeders’ Cup Juvenile after initially stalking the pace within a few lengths early on.

Messier possibly holds the most upside of all the Baffert names described above. This one broke his maiden by 6 1/2 lengths at Santa Anita on Oct. 22. Afterward, he won the Bob Hope Stakes (G3) in Nov. by 3 1/2 lengths.

Durante owns only a maiden win in three starts. His earned his win at Del Mar on Nov. 14 by a half-length over Union Train, who steadily closed the gap on Durante toward the wire along with Portsmouth and Noble Union.

Slow Down Andy broke his maiden against state-breds by 4 3/4 lengths at Santa Anita on Oct. 9. One month later, he was second in the Golden State Juvenile Stakes as the favorite, losing by only half a length to Finneus.

Anything can happen in horse racing, but the five Baffert horses look stronger than those two possible runners from the O’Neill barn. For bettors, this is another discouraging scenario where one trainer holds all the cards.

At first glance, it seems difficult to discount any of those Baffert 2-year-olds. Not even the maiden Rhetoric is discountable if he ends up competing. Remember, Baffert or any established trainer does not run maidens in graded-stakes races for no reason. If a Baffert-trained maiden shows up in a race such as this one, then it must mean he sees enough talent in the horse to win.

Bettors might want to consider skipping the Los Alamitos Futurity rather than go through the process of figuring out which sharp Baffert entry looks best. When Baffert trains half or more of the entries in a graded-stakes race, it feels like handicapping a swimming race where every entrant is Michael Phelps. How does one distinguish between all talented horses?

In any case, there are more interesting betting races at other tracks to spend money on. But these are early thoughts. When the final entries are released for the Futurity, maybe the race will appear more approachable than it does at the moment.