Preakness 2022: Playing a trifecta with Epicenter on top 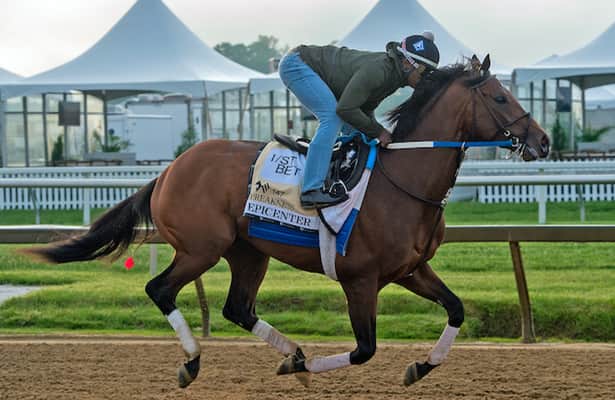 Even though Epicenter has put together a nice streak of strong performances since December, his morning line odds of 6/5 might discourage a few handicappers from playing him in the $1.5 million Preakness Stakes on Saturday at Pimlico. However, those odds seem fair.

Low odds alone should not discourage bettors from betting a horse. It all depends on whether the horse in question deserves those low odds, or whether the public has overestimated the horse’s chances to win.

In the case of Epicenter, he deserves the attention.

Since December, Epicenter has put together a 5-3-2-0 record. Those three wins came on the Fair Grounds route to the Derby and include the Gun Runner Stakes by 6 1/2 lengths, Risen Star Stakes (G2) by 2 3/4 lengths over a quality field and Louisiana Derby (G2) by 2 1/2 lengths.

His two losses in that time span came in the Lecomte Stakes (G3) and Kentucky Derby. Given the pace scenarios in both races though, Epicenter gave the impression of running a better race than the winner in both races.

In the Lecomte, Epicenter set a deceivingly fast pace while initially under pressure and still only lost by a head to Call Me Midnight.

As for Epicenter’s Kentucky Derby effort, after initially chasing suicidal fractions in eighth, Epicenter went forward and made the lead on the far turn. Even if Epicenter did not lead early, he still deserves pace credit.

Epicenter also held off the Blue Grass Stakes (G1) winner Zandon in the stretch. Rich Strike closed well to win, but he benefited from the pace.

Epicenter is the single. If not waiting for the Black-Eyed Susan - Preakness Double or any other multi-race wager and playing this race alone, constructing a trifecta or superfecta seems logical because it is hard to make money off a win bet with a probable even money shot.

Here are some horses to use in second.

Simplification made a closing move for fourth in the Kentucky Derby after settling in 15th through the opening half-mile. He benefited from the pace. But, he also might offer some value as the fourth choice.

Early Voting won the Withers Stakes (G3) in gate-to-wire fashion and ran second in the Wood Memorial Stakes (G2) after Mo Donegal caught him late. This tough pacesetter will feel pressure from Armagnac or Simplification, but he can hold on for a piece of the trifecta as long as the pace is not suicidal.

Creative Minister is an improving colt who was supplemented for $150,000 into this race. He gave an excellent visual impression when winning an optional claimer by 2 3/4 lengths at Churchill Downs on the Derby undercard.

For the third slot, also consider Secret Oath and Skippylongstocking.

Secret Oath flattened out to third in the Arkansas Derby (G1) at Oaklawn with a bad trip after making a flashy move on the far turn, and then won the Kentucky Oaks against her own gender by two lengths. She could pass some tired horses on the far turn and pick up third.

Skippylongstocking ran an even third in the Wood Memorial Stakes. If the pace heats up, he could pass some tired horses in the lane for a piece.

As long as Epicenter is not tired from his Derby effort and gets a reasonable trip, he should win. His speed figures are not blazing fast, but this is the best horse in the race and the best dirt 3-year-old in training.