Preakness 2021: Who does the pace scenario favor? 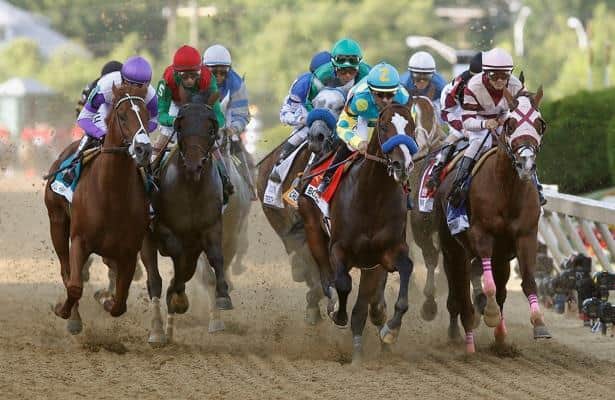 Deciphering the pace scenario for the 146th Preakness Stakes is not easy. Human strategy is the most important factor this time. Trainer Bob Baffert conditions two front runners in Concert Tour and Medina Spirit, and the chances of him directing the riders of both horses to secure the lead at all costs are slim. In all likelihood, there is a game plan.

Even from post 10, the most likely pacesetter is Concert Tour, whom Baffert remains high on even after a disappointing third-place finish in the Arkansas Derby (G1) last month. Considering jockey Mike Smith is piloting Concert Tour, it is likely Baffert wants him sent to the front as Smith typically lets good speed horses roll without restraining them.

If that assumption is true, then Medina Spirit will find himself in the pressing role under John Velazquez, or he might even spot his stablemate one or two lengths if Velazquez wants to play conservative.

Expect Medina Spirit to break well from Post 3 and let his stablemate cross over. If Concert Tour has trouble crossing, then Medina Spirit will lead.

Without the lead in hand, Medina Spirit has lost three times this year. Those non-pacesetting efforts include runner-up finishes in the Sham Stakes (G3), San Felipe Stakes (G2) and Santa Anita Derby (G1). To counter that point, a possible special horse in Life Is Good won the Sham and San Felipe, while Rock Your World ran a great race as well when he took control of the Santa Anita Derby pace and won.

Medina Spirit did not lose to slow horses in either race. For bettors backing Medina Spirit, while it is preferable to see him setting the pace, it is not a disqualifier in this situation if he does not set the pace.

Although Concert Tour put away Caddo River on the lead, can he put away a faster horse in Medina Spirit? That question is debatable.

In any case, neither Concert Tour nor Medina Spirit are likely to run at a suicidal pace. At most, expect them to go faster than usual but within reason of what both horses can handle. If a speed duel does happen, Smith and Velazquez can expect not to ride for Baffert for a while. With all the expensive horses in his barn, they do not want to risk that.

Right behind them, Midnight Bourbon is probable to settle into a stalking position. While this son of Tiznow owns the speed to set or press the pace in most normal route races, he figures to get outrun by the two speedier Baffert-trained pacesetters into the first turn.

Other entries such as Crowded Trade, Rombauer, Risk Taking and Ram are probable to make up the mid-pack runners. Rombauer might own enough tactical speed to join Midnight Bourbon, as shown early on before his third-place finish in the Blue Grass Stakes (G2).

Keepmeinmind, Unbridled Honor and France Go De Ina make up the rear. All three of them need a pace collapse, which is unlikely given that Baffert trains Concert Tour and Medina Spirit. If Midnight Bourbon flashes more speed than expected, then who knows? Based on pace figures, though, it does not seem likely Midnight Bourbon goes crazy.


Because the flow of the race favors the front, the stalkers and mid-pack types need to make something happen early. For example, even if Midnight Bourbon cannot make the lead in the opening half, he needs to turn up the pressure before the far turn. None of those horses are going to beat the Baffert runners if they wait until the stretch run to make a serious move. Baffert wins because he controls the pace and race flow.

In general, the notion that closers cannot win at Pimlico is wrong. Part of this assumption stems from the myth that Pimlico has “tight turns” and therefore favors speed. With the right setup and ability, mid-pack and deep closers can win on this track if there is no obvious bias.

But the Preakness looks to favor speed this time because the same trainer conditions both of the potential pacesetters, and the third-fastest horse owns moderate speed. Pace is a product of the horses’ speed and in some cases also is a product of human strategy.

Keep those points in mind when handicapping the Preakness and the rest of the card. If the big race seems unplayable because of the Baffert runners and the uncertainty surrounding their strategy, then find other races on the card to play. Pimlico offers a great overall card on this day.