Pegasus plays: Who to wager beyond Knicks Go, Life is Good? 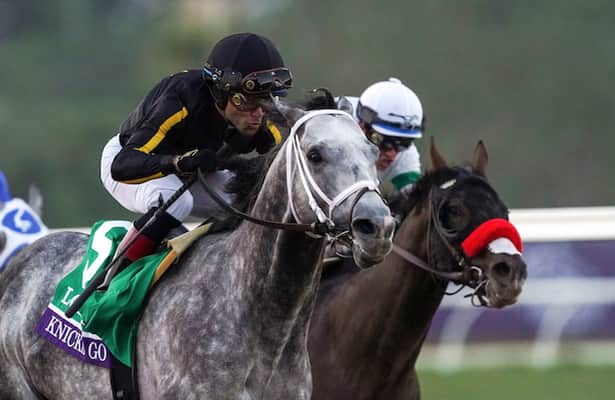 Knicks Go and Life Is Good compete against each other in a dream matchup on Saturday in the Grade 1, $3 million Pegasus World Cup Invitational at Gulfstream. The 1 1/8-mile dirt race brings together a nine-horse field and promises drama early on as the two stars flash their speed.

For handicappers who cannot dismiss one or the other’s win chances, the Pegasus poses a challenge in terms of betting since Knicks Go is listed at 6-5 and Life Is Good is 7-5, making the race unappealing at first glance.

Given the lofty credentials and talent of Knicks Go and Life Is Good, the chances of another horse pulling off an upset are low.

Knicks Go won last year’s edition of the Pegasus World Cup to kick off his 2021 campaign. After missing the trifecta in the Saudi Cup and Metropolitan Handicap (G1), he came back to form with four straight wins in the Cornhusker Stakes (G3), Whitney Stakes (G1), Lukas Classic (G3) and the Breeders’ Cup Classic on Nov. 6 to become the probable Horse of the Year.

Life Is Good won the Sham Stakes (G3) and San Felipe Stakes (G2) to start off his campaign on the Derby trail last year. But he went on the shelf afterward and missed the Triple Crown series. During Life Is Good's time off after the San Felipe, the connections decided to transfer him east from trainer Bob Baffert to Todd Pletcher.

Under Pletcher’s care, Life Is Good continued his great form. He finished a strong second by a neck to Jackie's Warrior in the H. Allen Jerkens Memorial (G1) at Saratoga before winning the Kelso Handicap (G2) and Breeders’ Cup Dirt Mile to cap off his successful season.

Given the low prices on Knicks Go and Life Is Good, bettors without a win alternative to those two stars need to ask themselves whether this race is worth playing. Some of the undercard stakes races on the Pegasus card might offer better value than in this de facto match race.

If the Pegasus is needed in multi-race wagers, use both Knicks Go and Life Is Good. Some bettors frown on not keying one horse in the big race, but there is no reason the Pegasus must be the chosen race to single. In the case of multi-race wagers ending in the Pegasus, there is a viable single candidate in the Fred W. Hooper Stakes (G3). He will be discussed later in the week.

As for the vertical wager, creativity is needed to aim for a decent payoff. Maybe bettors can find one long shot entry to backwheel key under the two favorites. On paper, this backwheel key needs to show the ability to hit the board regularly in Grade 1 races, even if he does not win often.

Stilleto Boy fits the description. He ran second in the Awesome Again Stakes (G1) and third in the Malibu Stakes (G1) at Santa Anita last year.

Even Stilleto Boy’s fifth-place finish in the Breeders’ Cup Classic between those two races is not terrible when thinking about the competition. Knicks Go, Medina Spirit, Essential Quality and Hot Rod Charlie made up the superfecta, but Stilleto Boy still outran his 51-1 odds by running fifth. Stilleto Boy also beat former Grade 1 winners such as Art Collector, Tripoli and Max Player, who ran sixth, seventh and last.

Although Stilleto Boy competed as a speed horse under his former trainer Doug Anderson, his new trainer Ed Moger Jr. has been conservative with Stilleto Boy and converted him into a stalker or mid-pack closer type. In other words, he is not likely to contest the lead and commit pace suicide against Knicks Go and Life Is Good.

As long as Stilleto Boy does not burn himself out pursuing Knicks Go and Life Is Good, he can save his energy for the stretch run and hit the board.

The tickets below will keep the backwheel tickets simple by constructing an easy exacta and trifecta backwheel with Stilleto Boy alone in one slot in each ticket.

To backwheel key Stilleto Boy in second using an exacta, place him in second alone underneath Knicks Go and Life Is Good.

Here are the numbers laid out below in both backwheel tickets.

No matter who wins, the Pegasus looks like a great race to watch as a fan because of Knicks Go and Life Is Good. One of them will get the job done.