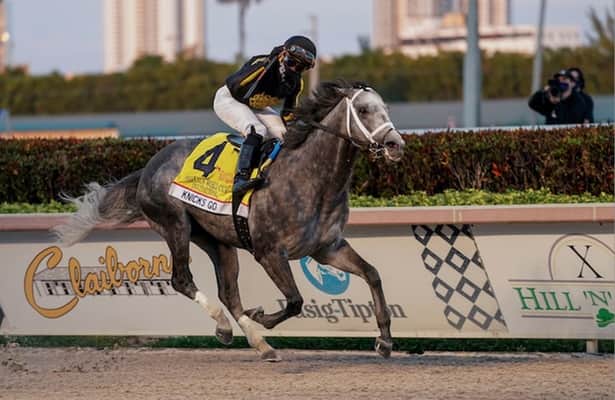 Assuming the final $3 million Pegasus World Cup Invitational field stays close to its current list, the pace scenario should end up as a fast one, with a chance of a meltdown if the main speed horses are let loose.

The nine-furlong race for older horses is scheduled to run on Jan. 29 at Gulfstream Park. Racing stars such as Knicks Go, Life Is Good and Flightline lead the list of invitees, although Flightline is not expected to participate.

Knicks Go and Life Is Good both own the type of speed to set the pace in most races. In his most recent start, Knicks Go led the field from gate to wire in the Breeders’ Cup Classic. His wins in the Whitney Stakes (G1) and last year's Pegasus World Cup also came in the same fashion. Life Is Good won with his own pacesetting tactics in the Breeders’ Cup Dirt Mile, but he also can press the leader or chase in second if necessary.

If Eight Rings starts, he could raise the possibility of a pace collapse.

Eight Rings shows three wins in 13 starts. One of those wins came in the 2019 American Pharoah Stakes (G1) when he set the pace and opened up by six lengths in the stretch for an impressive win early in his career.

In his only other win after that point, Eight Rings set the pace in an allowance optional claiming race last October at Santa Anita and won by a widening four lengths. His best chance to win comes when he leads.

Even in his recent loss in the San Antonio Stakes (G2), Eight Rings fought against Hot Rod Charlie longer than expected after setting the early pace. He eventually faded to third after Express Train wore both of them down late in the stretch. Up until that point though, Eight Rings still had a reasonable chance to beat the more accomplished Hot Rod Charlie.

With Eight Rings’ best races in mind, trainer Bob Baffert is likely to let him loose, even with Knicks Go and Life Is Good in the same race.

Midnight Bourbon also owns dangerous speed. His last win came in the Lecomte Stakes (G3) at the start of 2021 in pacesetting fashion.

Later in the season, Midnight Bourbon pressed Kentucky Derby champion Medina Spirit through grueling fractions in the Preakness Stakes, before Rombauer took advantage of the pace and blew by both of them for the win. Despite the loss, Midnight Bourbon still impressed from a pace standpoint by outfinishing a tired Medina Spirit for second.

When asked to go, Midnight Bourbon is capable of running with any horse. He can make Knicks Go, Life Is Good and Eight Rings run faster than ideal through the initial fractions. For that reason, his presence can help melt down the leaders and set up an ideal run for the stalkers and closers.

Two other speed types that could contribute to the pace are Ginobili and possibly Concert Tour if he draws in off the Also Eligible list.

In his most recent start, Ginobili pressed the pacesetter Following Sea in the Cigar Mile (G1) before fading to sixth. On the stretchout to nine furlongs, he is likely to utilize his natural speed and mix it up with the front-runners.

As for Concert Tour, he set the pace on his way to winning the Rebel Stakes (G2) on the Derby trail last year. When forced to use pressing tactics in the Arkansas Derby (G1) against Caddo River, he faded to third late instead. His old form indicates he wants the lead, although his new trainer Brad Cox might opt for more conservative tactics with him.

On paper, the Pegasus World Cup pace is fast and liable to collapse if every horse runs to their preferred style. But, keep in mind that sometimes the best horses are capable of withstanding a harsh pace. Jockey or trainer strategy can also change the pace scenario and make it slower than expected.

As it stands right now though, the stalkers and closers will get a good chance to show their capabilities in the Pegasus.