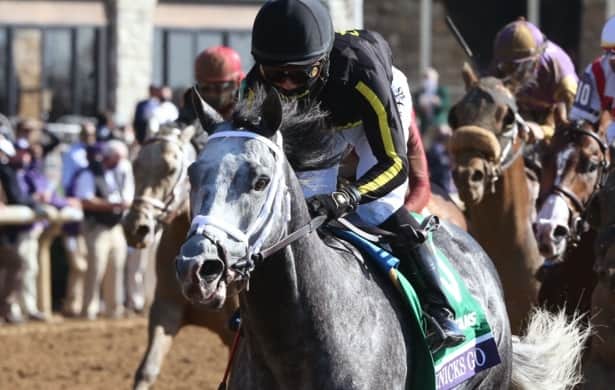 After reading comments from Sleepy Eyes Todd’s trainer Miguel Angel Silva, it seems like reverting back to speed is not on his agenda.

[RELATED: Ranking the best editions of the Pegasus World Cup]

“We believe that we don’t have the speed to beat those kinds of horses in the race, so we wanted to be in behind,” he said. “We were too close in that race.”

Silva also reveals his plan to rate Sleepy Eyes Todd in the Pegasus.

“I love the mile and an eighth,” Silva said. “He already won at that distance and he performed really good at that distance. We’re just hoping that we have a different kind of trip. We don’t want to be on the lead and hopefully we can pick up horses at the end.”

In that case, the chances of Knicks Go securing an uncontested lead go up dramatically. None of the other Pegasus invites own his kind of speed.

Who is probable to chase Knicks Go a few lengths behind him?

After the Pimlico Special, though, Harper’s First Ride went back to closing tactics for two straight races in the Maryland Million Classic Stakes and Richard W. Small Stakes at Laurel Park before displaying a bit more speed by tracking the pacesetter a few lengths behind in the Native Dancer Stakes.

In other words, Harper’s First Ride’s early tactics are a guess.

Mr Freeze set the pace in last year’s Pegasus World Cup before letting Mucho Gusto take over in the stretch run in a great effort. One race after that, he won the Gulfstream Park Mile (G2) with a close stalking trip.

In his more recent starts, Mr Freeze has stalked in the Fayette Stakes (G2), Breeders’ Cup Dirt Mile and Clark Stakes (G1). He only won the Fayette in the stretch while missing the superfecta in the latter two races.

Mr Freeze is probably capable of showing the speed shown in the Pegasus last year. However, the fear of another late fade might keep him as a stalker here. Either that or he grew out of his natural speed as an older horse.

Tax possesses speed too. But again, it is not the same kind of speed as Knicks Go, and predicting whether he uses it feels like a guess as well.

In this most recent start, Tax set the pace in the Harlan’s Holiday Stakes (G3) at Gulfstream before pulling away impressively by 4 1/2 lengths. Yet, in the Oaklawn Handicap (G2) last May, Tax ran as a stalker in an even effort for fifth. Last year in the Pegasus, Tax was in mid-pack and faded to ninth.

The same comment on unpredictability applies to True Timber.

From a logical standpoint, True Timber figures to show speed after running as a close-range stalker in the Cigar Mile (G1). Last August, he also contested the lead in the seven-furlong Forego Stakes (G1) at Saratoga.

But True Timber was not factor in the Pegasus last year after running in mid-pack. He also did not show early speed in the Vosburgh Stakes (G1) and Lafayette, where he did close for second against Sleepy Eyes Todd.

Coastal Defense is yet another stalker type, as shown in the Fayette Stakes and Clark Stakes at the same distance. He is not stretching out, making him unlikely to run in a different manner than those two races.

Then there is Independence Hall, who stretches out to nine furlongs in the Pegasus after two sprint attempts since his return last November. But he seems to run as a stalker at any distance, as shown in the Florida Derby (G1).

If Knicks Go secures an uncontested lead, does he win? That is debatable, although that specific trip is his only ticket to victory.

All five of Knicks Go's wins came at 1 1/16 miles or less. It might not seem like a huge stretch to last nine furlongs if he can win at 1 1/16 miles, but he still needs to prove it and does not figure to offer a huge value as a popular Breeders’ Cup winner.

With all that said, the pace is likely at least a moderate one if Knicks Go secures the lead. Given his natural speed, he is not going to crawl.

If Sleepy Eyes Todd uses his natural speed, or if another horse contests the pace with Knicks Go, then the pace is fast. However, this is not the more probable scenario because it is a suicide mission to duel with Knicks Go.

To wrap this all up, Sleepy Eyes Todd’s rating tactics will be a gift to Knicks Go, as he figures to lead through reasonable fractions. But the race is not a done deal for Knicks Go, and other horses could still switch tactics.