Parx analysis: Which filly benefits from the Cotillion scratch? 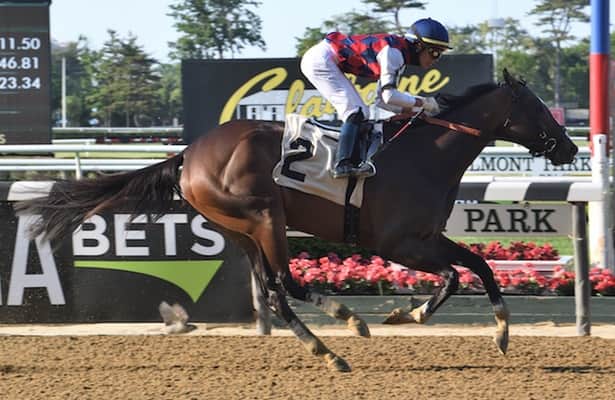 Although races do not always set up perfectly, it looks like the Chad Brown-trained filly Always Carina will secure an uncontested lead without Private Mission around. In dirt racing, a quality horse who is alone on the lead through slow fractions is almost always a major threat to win the race.

Here is a recap of Always Carina’s record.

Always Carina started her career with a bang on April 11 with an easy four-length maiden win at Aqueduct at six furlongs. From a visual standpoint, she sparkled in the stretch.

This filly also made a great impression on May 20, when she overcame a stumble at the start to contest the lead with Jordan’s Leo before drawing clear of that opponent and winning by 9 3/4 lengths.

After those two impressive wins, the future was bright for her.

But then came a setback to Always Carina’s fast start. The connections decided to take a chance at the Mother Goose Stakes (G2) at Belmont.

Always Carina set the pace through slow fractions in the Mother Goose, and then she had to face the challenge of Zaajel around the turn.

She slowly relinquished the lead to Zaajel, who upset the field at 18-1.

Did Always Carina run that poorly? She still beat Clairiere by a nose for third, and Make Mischief was only 1 1/4 lengths behind the pair in fourth. In Clairiere's next two starts, she ran third in the Coaching Club American Oaks (G1) to Maracuja and Malathaat, and second by 1 1/2 lengths in the Alabama Stakes (G1) to Malathaat with a belated rally.

Always Carina had made her graded-stakes debut in the Mother Goose as well. No matter how talented a horse looks on paper, jumping from an optional claiming race to a graded-stakes race is not an easy task in the first attempt. Zaajel had that prior graded-stakes experience as the Forward Gal Stakes (G3) winner at Gulfstream.

Given her inexperience, Always Carina gets a pass for the Mother Goose effort.

Always Carina then ran worse in the Test Stakes (G1) at Saratoga on Aug. 7 by finishing fourth by 7 3/4 lengths after jockey Flavien Prat attempted rating tactics.

She also gets a pass for the Test effort because this is not the type of filly to rate. Always Carina gives the impression of a need-the-lead speed horse who did not appear comfortable running behind horses in the Test. She wants to run freely in front.

With Private Mission’s scratch, Always Carina is probable to set the pace alone. She is capable of securing the lead in a sprint, which means that in a 1 1/16-mile race with no other pacesetters, Always Carina is supposed to lead.

While Always Carina is the top selection, bettors involved in longer multi-race wagers might want to include at least one more filly.

The best option to include alongside Always Carina is Army Wife, the third-place finisher in the Alabama Stakes (G1). She was two lengths behind the winner Malathaat and half a length behind Clairiere, who is also entered in this race.

Army Wife made a nice move on the far turn to briefly lead the Alabama field before Malathaat came looming alongside her to take control and inch clear from Army Wife. Clairiere ran into the picture in the last few moments to take second from Army Wife, but Army Wife had done more work by stalking closely and briefly hitting the front.

Cutting back in distance might help this filly as well. Two starts ago, Army Wife took the Iowa Oaks (G3) by 3 3/4 lengths at 1 1/16 miles. Before that race, Army Wife also won the nine-furlong Black-Eyed Susan Stakes (G2) at Pimlico by 2 3/4 lengths.

Always Carina is preferred, as long as her odds remain higher than Army Wife and Clairiere. For Pick 4 and 5 bettors, Army Wife is a worthy filly to include.

Bettors with a large budget might include Clairiere too. But Clairiere carries a five-race losing streak into this race and offers no value at probable odds of less than 2-1. In smaller tickets, this closer fits better as an underneath option who picks off tired fillies late.

Army Wife is possibly the best filly here in terms of overall ability and versatility. If Always Carina does secure an easy lead, though, she might be long gone.