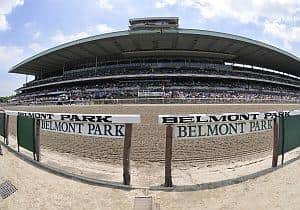 As the New York racing scene moves from Saratoga to Belmont Park, the main difference for handicappers is the switch back to one-turn routes.

The massive size of Belmont means that dirt route races at one mile, a 1 1/16 miles and 1 1/8 miles involve only one turn for horses, rather than two as at most tracks. As for 1 1/4-mile races, they start at an early point on the first turn.

[RELATED: What to expect when Belmont's fall meet opens]

For many horses, one or two turns does not make a difference as much as the distance of the race. But there are sprinters who can take advantage of the Belmont configuration to score a win at a route when having to navigate only a single bend.

One example is Complexity, who had hype behind him after breaking his maiden at Saratoga in September 2018 and winning the one-turn, one-mile Champagne Stakes (G1) about a month later at Belmont.

He was a strong three-length winner of the Champagne.

Then in his initial crack at two turns in the Breeders’ Cup Juvenile, Complexity faded to 10th after setting the pace.

Granted, he also went a slightly longer distance than one mile by running a 1 1/16 miles.

One year later, Complexity ran a close second by half a length after contesting a grueling pace in the seven-furlong Forego Stakes (G1) at Saratoga. Then, he won the one-mile Kelso Handicap (G2) over Code of Honor last October at Belmont before fading to fourth by four lengths after chasing Knicks Go in the two-turn Breeders’ Cup Dirt Mile at Keeneland.

Complexity still ran a fast race in his fourth-place finish, but the one-turn configuration of most his races helped him perform his best.

Another example is Jackie’s Warrior, who has turned into a monster sprinter.

Last summer, Jackie’s Warrior won the six-furlong Saratoga Special (G2) and seven-furlong Hopeful Stakes (G1) at Saratoga. Heading into the one-mile Champagne Stakes, he had to answer the question of added distance.

Jackie’s Warrior put those fears to rest with an easy 5 1/2-length win over Reinvestment Risk, with the familiar Midnight Bourbon 14 1/4 lengths back. Like Complexity, Jackie's Warrior led from gate to wire.

Off that strong Champagne win, it was logical to think Jackie’s Warrior could handle the 1 1/16 miles in the Breeders’ Cup Juvenile at Keeneland, even at two turns. After stalking the pace and briefly holding the lead, he faded to fourth by 3 1/4 lengths. Did the two turns affect him?

When Jackie’s Warrior made his return in the two-turn Southwest Stakes (G3) at Oaklawn in February, he led uncontested before fading to third by 8 1/2 lengths. Perhaps the slop affected Jackie’s Warrior, but he won the Amsterdam Stakes (G2) over the slop in August by 7 1/4 lengths. Besides the extra turn and wet dirt, the only other excuse was the possible dead rail.

In Jackie’s Warrior’s next start after the failed Derby trail attempt, he won the one-turn Pat Day Mile (G2) at Churchill Downs in May. Based on his Breeders’ Cup and Southwest efforts, it is hard to think the extra turn makes no difference. On paper, it looks like he prefers one turn.

As for how this discussion relates to handicapping Belmont races at this meet, certain horses who look like sprinters from a visual and pedigree standpoint might end up handling the one-turn dirt mile in important Breeders’ Cup prep races such as the Kelso Handicap (G2), Champagne Stakes (G1) and Frizette Stakes (G2) just fine.

Therefore, it is important not to penalize horses as severely for not showing a route pedigree in one-mile dirt races at Belmont, especially when analyzing 2-year-old runners who are a step ahead of their peers.

Another Complexity or Jackie’s Warrior might emerge as a clear winner of the Champagne before struggling to handle two turns at Del Mar and elsewhere. The same idea holds true for whichever filly wins the Frizette, as she also deserves extra scrutiny at Del Mar because of the two-turn route configuration over there.

Why does the one-turn mile help some sprinters? The lack of an extra turn likely helps these speed horses get into a good rhythm faster. With only one far turn to worry about, the horse only needs to move forward through the opening quarter.

As stated above, though, for many horses, the one or two-turn configuration does not matter and they perform the same. A one-turn route also might hamper horses who are used to the field slowing down for the initial turn. Maybe the extra turn helps them secure the lead.

In any case, these are one handicapper’s observations on how the Belmont configuration affects one-mile dirt routes. It is up to the handicapper to decide how the one-turn routes at Belmont affect their analysis, if at all.