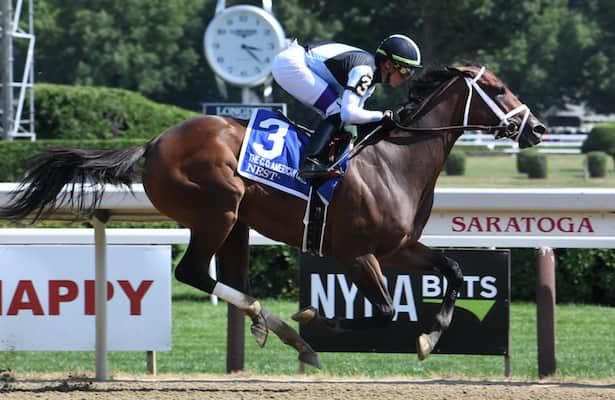 With Nest expected to start at extremely low odds in the Grade 1, $600,000 Alabama Stakes at Saratoga on Saturday, some value bettors might give Secret Oath another shot on their tickets in an attempt to get a better price.

Yet, Nest beats Secret Oath in two important handicapping categories. Is there any reason to fish for value if the favorite looks best on all important points?

In terms of speed figures, Nest earned a 130 TimeformUS Speed Figure when she won the Coaching Club American Oaks (G1) last month by 12 1/4 lengths. She pulled clear from Secret Oath in a way that few expected.

Secret Oath faded away in second and posted “only” a 117.

In May, Secret Oath earned a career-high 118 when fourth in the Preakness Stakes. The odd part is that she struggled late in that race, but competing against males likely meant that even a bad race resulted in a fast number for her.

If Nest had earned the 130 in an easier race without Secret Oath, handicappers could argue that Nest needed to prove it again. But Nest did prove it. As seen in the replay above, Nest crushed Secret Oath.

As for successful 1 1/4-mile experience, neither Nest or Secret Oath tried this distance before. In general, 3-year-old fillies do not get to compete at 10 furlongs often. But Nest still looks better in this category too because she ran a great second by three lengths to Mo Donegal in the 1 1/2-mile Belmont Stakes against males.

Secret Oath finished third in the nine-furlong Arkansas Derby (G1) against males in April and then defeated Nest to capture the Kentucky Oaks in May.

When Secret Oath stretched out slightly to 1 3/16 miles in the Preakness though, she looked flat in the stretch run as she lost ground late. It did not matter that Secret Oath earned a TimeformUS figure in line with her previous starts. From a visual standpoint, Secret Oath was flat when attempting the extra distance.

Nest beats Secret Oath in terms of speed figures and longer route experience. Secret Oath might offer higher odds than Nest, but is there any reason to pick Secret Oath, knowing she falls behind Nest in those two categories? Bettors would need to take a leap of faith that Secret Oath will improve and make the same type of progression that Nest made in the CCA Oaks.

If there is an upset in the Alabama, maybe it will come from Gerrymander. This Into Mischief filly turned in a solid 2-year-old season where she ran second in the Frizette Stakes (G1) and won the Temped Stakes last fall.

In her second start off the layoff in June, Gerrymander took the Mother Goose Stakes (G2) by three lengths with a 114 on TimeformUS. The speed figure might seem low, but Gerrymander beat notable fillies in that race, including Shahama in second and Juju’s Map in third.

Regardless, Nest remains the one to beat in the Alabama, especially since the distance is 1 1/4 miles. With her lofty speed figure, successful experience at a longer distance and useful tactical speed, she is the best filly on paper and a worthy single for those not keen on Secret Oath or Gerrymander.

If Nest’s odds become too low to swallow, then just watching the race is fine too. No one ever said that chasing every race is a good idea.