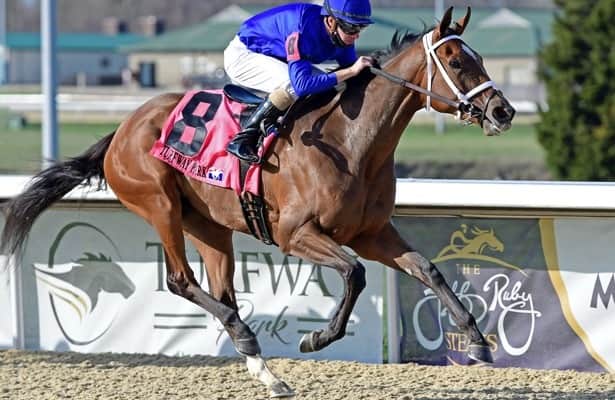 Following the successful Kentucky Oaks/Kentucky Derby Double listed on this blog two weeks ago, which returned $95.80, the main play for the $1 million Preakness Stakes on Saturday will be a double linking the Black-Eyed Susan Stakes (G2) on Friday. Similar to the Kentucky Oaks on Derby week, the Black-Eyed Susan acts as the main race for 3-year-old dirt fillies this week.

To start off with the Black-Eyed Susan, Adventuring is the top selection. She enters this race with great momentum after breaking her maiden at Fair Grounds on dirt by 6 ½ lengths and winning the Bourbonette Oaks at Turfway Park over synthetic.

In the maiden race, Adventuring made use of tactical speed to sit in a stalking position. At Turfway though, she was a closer who rallied from seventh to win.

From post 9, jockey Florent Geroux can watch the break and adjust as needed on Adventuring. With that said, she likely needs to use early speed to avoid a wide first turn. From there, Geroux might sit close or spot the leaders a few lengths as a stalker.

Adventuring’s TimeformUS Speed Figures are progressively becoming faster with an 85, 91, 97 and 100 in her four career starts.

One concern is that trainer Brad Cox tried to enter Adventuring on turf in her first three starts, which signals that he sees a turf horse physically. Regardless, Adventuring ran well all three times on dirt once they became off-the-turf races. As the daughter of 2012 Alabama Stakes (G1) and Coaching Club American Oaks (G1) winner Questing, she is supposed to handle dirt, pedigree-wise.

In this double, Adventuring is a worthy single.

As for the Preakness, this blog has hinted at using Medina Spirit along with Midnight Bourbon. After thinking about the other options, those are the two final selections.

Historically, Kentucky Derby horses with speed fare well in the Preakness. Medina Spirit won by setting the Derby pace and lasting the 1 1/4 miles, which means he does not get tired even with a fast pace at a classic distance. Back in February, Medina Spirit set a blitzing pace in the Robert B. Lewis Stakes (G2) and still won.

The Derby pacesetting win sets him up nicely for the Preakness, where the only two speed horses are his stablemate Concert Tour and the moderate speed Midnight Bourbon.

From a speed figure standpoint, Medina Spirit also holds a tremendous advantage. He owns the top five TimeformUS Speed Figures with a 122, 118, 120, 117 and 118 in his last five starts. No other horse in the Preakness has hit those figures, although Concert Tour comes close to the 117 with a pair of 116 figures.

The question is whether Medina Spirit can still win even if Baffert decides he wants Concert Tour sent to the lead. Even though it is preferable for Medina Spirit to secure the lead, at least he is not facing the likes of Life Is Good or Rock Your World.

As for Midnight Bourbon, he put forth a good effort in the Kentucky Derby.

The subpar break did not allow him to utilize his speed, as the horses breaking to his outside came in and put up a barrier heading into the first turn. At that point, Mike Smith took a hold of Midnight Bourbon. After traveling as far back as 14th at one point, Midnight Bourbon made up enough ground late to finish a good sixth.

Midnight Bourbon is not a closer. If Midnight Bourbon breaks well, expect him to chase Concert Tour and Medina Spirit in third, or possibly even press the leader if one of the two Baffert pacesetters fails to take up the expected position up front.

He needs to improve on his career-high 114 TimeformUS Speed Figure from the Louisiana Derby (G2), and that is possible given his sire. This is a son of Tiznow, whose progeny tend to develop at a slower pace. The public likely has not seen his best yet.

Note how well the Louisiana Derby runners performed in the Kentucky Derby as well. Including Midnight Bourbon, they took up four of the first six positions.

Given Midnight Bourbon is the third choice on the morning line, he does offer some value as well even if people are talking about him. He makes a worthy inclusion into this planned double.

If Adventuring loses the Black-Eyed Susan, then Midnight Bourbon becomes a possible win and place bet at 4-1 or higher. After all, if one of the Baffert runners misses the place spot, then the return for Midnight Bourbon to place might turn out decently enough.

If Adventuring wins the Black-Eyed Susan though, then the doubles below are the only plays, especially if she is backed with a win ticket.

The second double is separated because it is played for less money than the combination with Medina Spirit. A win bet on Adventuring will also be made.

No matter the selections, watch the expected payoffs and adjust if necessary. What appears like value at the moment could turn into a poor play once live wagering begins.