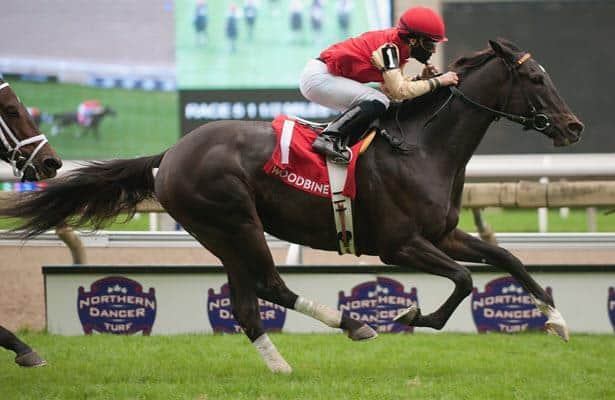 The Saturday plays on this blog were off the mark, but the Memorial Day cards provide a chance to hit some winners before the Belmont Stakes later this week.

The analysis below is highlighted by picks for the $300,000 Shoemaker Mile (G1) and $300,000 Hollywood Gold Cup (G1) at Santa Anita. Each of the four races offers a different reason or angle for choosing the selected horse.

Against this optional claiming field, 9-5 sounds like a great price on Li’l Tootsie.

In January, Li’l Tootsie broke her maiden in a six-furlong Fair Grounds maiden race by four lengths while running a 107 TimeformUS Speed Figure.

Following the fast maiden win, Li’l Tootsie then regressed while trying to route twice. Even though she still finished first in a Feb. 12 optional claiming race at Fair Grounds, she then faded to a disappointing fifth by 9 1/2 lengths in the Fair Grounds Oaks (G2). In those two starts, Li’l Tootsie earned only a 96 and 97 on TimeformUS.

In the Eight Belles Stakes (G2) at seven furlongs, either jockey Flavien Prat or the connections decided to experiment with deep closing tactics. Li'l Tootsie started off in 11th before making her way to fourth at one point and flattening out to sixth at the end.

Now, Li’l Tootsie cuts back to her preferred distance of six furlongs and gets Lasix again. Expect Li’l Tootsie to win by a comfortable margin.

Say the Word enters in top form after a close second in the local San Luis Rey Stakes (G3) and a 1 1/2-length win in the Elkhorn Stakes (G2) at Keeneland.

The question is whether Say the Word can cut back to one mile.

Earlier in his career, he ran well in a couple of one-mile races. Note the closing third in the 2019 King Edward Stakes (G2) at Woodbine, where he lost by 1 3/4 lengths to the familiar Synchrony. About one month before the King Edward that year, he also won a one-mile Belmont optional claiming race by 1 1/2 lengths.

Perhaps trainer Philip D’Amato has this turf runner in top form regardless of the distance. He might need help from the other runners to soften up the favorite Smooth Like Strait on the front end.

Since being gelded, Royal Ship has transformed into a new horse.

In March, Royal Ship finished a closing fifth in the Frank E. Kilroe Mile Stakes (G1), losing by only one length with a career high 120 TimeformUS Speed Figure.

Then in the Californian Stakes (G2) one month later, Royal Ship pressed the pacesetter Country Grammer before proving best in the stretch by a neck. The most impressive part about the Californian victory is that Royal Ship earned a sky-high 131 on TimeformUS. In general, only elite runners pass the 130 mark on that scale.

Express Train is the morning-line favorite, but he shows no TimeformUS figures above 125.

If Royal Ship’s odds are the same or higher than both Country Grammer and Express Train, then Royal Ship is the clear choice.


Dreamer’s Disease has been compromised in his three most recent races, including the Pat Day Mile (G2), New York Stallion Series Stakes and Breeders’ Cup Juvenile. In each of those races, he either led or contested a fast pace before fading late.

Four starts ago with an uncontested lead, Dreamer’s Disease won a one-mile optional claiming race at Keeneland by 4 1/2 lengths.

Dreamer’s Disease needs the lead to give his best shot, which makes him a bit one-dimensional. In this spot, securing the lead is possible. Rightandjust set the pace in the Risen Star Stakes (G2) in February, but the connections chose to play conservative and rate him in the Louisiana Derby (G2) and locally in an allowance.

Dreamer’s Disease gets one more chance to prove himself. At his morning line odds of 12-1, he is worth a shot playing to win and place. He remains a decent value up until 8-1.