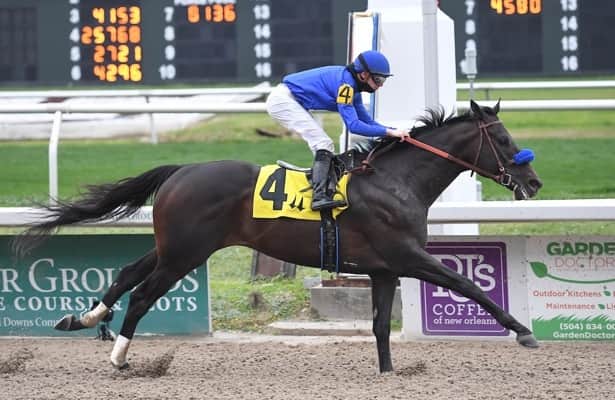 With the emergence of overseas targets such as the Dubai World Cup and Saudi Cup, the Grade 1, $400,000 Santa Anita Handicap has taken a hit in modern times in terms of field quality. But Saturday's edition likely is not one to criticize as it features an established star in Maxfield and a solid supporting cast.

The 4-year-old colt Maxfield won the hearts of racing fans early with sweeping wins to break his maiden at Churchill Downs and capture the 2019 Breeders’ Futurity (G1) at Keeneland. But an untimely injury ended his Breeders’ Cup plans, and he went on the shelf.

Upon return, Maxfield began where he left off by taking the Matt Winn Stakes (G3) last June at Churchill Downs over decent runners in Ny Traffic and Pneumatic. The race became a stop on the Kentucky Derby trail thanks to the virus pandemic and Derby postponement, sparking up discussion that Maxfield could still make the big race in September.

Unfortunately, Maxfield went on the shelf again with another physical issue. He did not emerge until the Tenacious Stakes at Fair Grounds in December, which he won by 2 1/2 lengths over Sonneman. Then, he took the Mineshaft Stakes (G3) on the same course last month by 3 1/4 lengths over Sonneman again.

Maxfield seems ready to make the next leap forward past the Fair Grounds group of horses and capture his second Grade 1 race this weekend at Santa Anita. But the probable field he faces is a legitimate one.

For example, Independence Hall sticks out immediately as a possible contender. As a 27-1 shot, Independence Hall ran a surprising third in the Pegasus World Cup at Gulfstream Park. He lost by only three lengths to one of the top older horses in Knicks Go.

Earlier in his career, Independence Hall gave the impression of a possible monster after a 12 1/4-length victory in the 2019 Nashua Stakes (G2). The hype wore off after he chased a fast pace and finished second in the Sam F. Davis Stakes (G3) last year. Independence Hall then was labeled a sprinter after a fifth in the Florida Derby (G1).

When Independence Hall made his return at Del Mar last November, he won a 6 1/2-furlong optional claiming race. But he did not factor at all in the Malibu Stakes (G1) the following month, finishing fifth and 9 3/4 lengths behind the winner, Charlatan.

Independence Hall’s third in the Pegasus puts his form in the right direction and eliminates the sprinter-only label. But at 1 1/4 miles, he will need to stretch out again.

Besides Maxfield, Coastal Defense is another interesting shipper on the probables list. In his most recent start, he ran a mild sixth in the Pegasus World Cup.

Prior to that effort, Coastal Defense turned in a troubled fourth-place finish in the Fayette Stakes (G2) and another fourth in the Clark Stakes (G1). Although he is talented and loaded with stamina as a Curlin half-brother to multiple Group 1-winning European stakes router Hawkbill, Coastal Defense has lacked the proper turn of foot to win his races.

Described as a “grinder” by trainer Dale Romans, the stretch to 1 1/4 miles might help Coastal Defense move forward and finally take a graded stakes race, especially with Maxfield and Independence Hall both unproven at the 10-furlong distance.

Out of the horses who prepared for this race locally, Express Train stands out at first glance because of his win in the San Pasqual Stakes (G2) in January. He took the race by a clear margin of 3 1/4 lengths over Tizamagician in second and Idol in third.

The effort did not come out of nowhere, as Express Train also finished runner-up to Charlatan in the Malibu Stakes (G1) at odds of 16-1 only one month earlier. Earlier in his career, he flashed promise by breaking his maiden by 14 1/4 lengths.

But a distant fourth-place finish in the 2019 American Pharoah Stakes (G1) and a long shelf time afterward stopped Express Train’s early momentum as a juvenile.

Most casual fans will also recognize King Guillermo, who makes the third start of his troubled comeback in the Big 'Cap.

Following his strong win in the Tampa Bay Derby (G2) and runner-up finish in the Arkansas Derby (G1) to the talented Nadal last year, King Guillermo went into the Kentucky Derby as one of the main contenders. But on the week of the race, trainer Juan Carlos Avila withdrew him.

When King Guillermo made his return in the Cigar Mile (G1) in December, he contested the pace and faded to a distant fourth, losing by 12 1/4 lengths to True Timber. Avila then shipped King Guillermo to Santa Anita for the San Pasqual and the popular colt regressed even further, finishing a dismal fifth and last by 21 3/4 lengths.

If King Guillermo can find his old form from last spring, he might threaten Maxfield. His second to Nadal at Oaklawn was a great effort that put him in the mix of top 3-year-olds pointing toward the Derby in September. With that said, another flop will raise questions about whether his physical problems were ultimately too great to overcome.

Completing the list of probables, as seen on HRN, are Idol, Multiplier, Tizamagician and Kiss Today Goodbye, and even those last few names offer an argument to win.

This is a great edition of the Santa Anita Handicap for fans and bettors, with many directions to go for those who wish to play against the undefeated Maxfield.