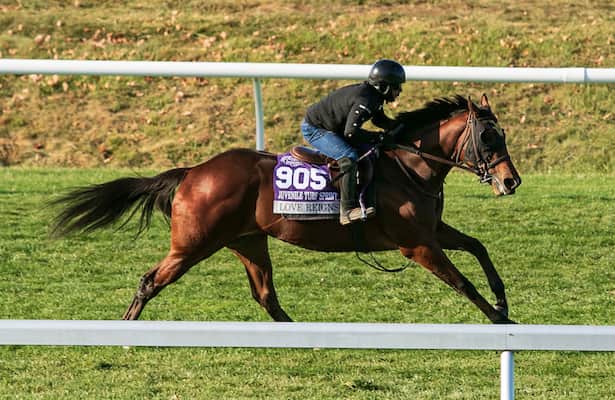 Even though Love Reigns makes only the fourth start of her career in the $1 million Breeders’ Cup Juvenile Turf Sprint on Friday at Keeneland, she already has shown the potential to become the next turf sprint star for trainer Wesley Ward after two wins in three starts.

Breeders’ Cup draw: See fields for the 14 races at Keeneland.

At this point, Love Reigns follows a similar pattern to Ward turf sprint stars Golden Pal and Kimari, who became a dirt sprinter later on.

In April, Love Reigns began her career with a splash by winning a 5 1/2-furlong turf maiden sprint at Keeneland by an astonishing 9 3/4 lengths. The margin is significant because turf sprints do not allow enough time for horses to build up massive margins before the race ends, as opposed to marathons where more time is available.

With a dominant maiden win in tow, Ward sent Love Reigns overseas to the prestigious Royal Ascot meet, where she competed in the Queen Mary Stakes (G2). Love Reigns broke well but faded to fourth by three lengths.

Regardless of the loss, Love Reigns performed well on a different continent in a Group 2 stakes race. She finished three lengths behind Dramatised, who also is entered in the Juvenile Turf Sprint this week.

For example, the runner-up Danse Macabre took the Untapable Stakes at Kentucky Downs in her next start, and the third-place Redifined lost the Matron Stakes (G3) at Belmont Park by only a neck to American Apple, who is back as another entrant in the Juvenile Turf Sprint.

On North American soil, Love Reigns is a dominant turf sprinter against females. But she does need to defeat both genders to win this race.

Golden Pal did not start off his career with a huge double-digit win, or at Keeneland. Rather, he began his 2-year-old season in April 2020 on Gulfstream Park's dirt course, where he lost by 3/4 of a length to Gatsby. Although Golden Pal's career debut came at Gulfstream, the time period of his first start resembles the time of Love Reign's debut.

Ward brought Golden Pal to the Royal Ascot meet, and he ended up running second by a neck to The Lir Jet in the Norfolk Stakes (G2).

Golden Pal finally broke his maiden upon returning to North America in the Skidmore Stakes at Saratoga, which he won by 3 ½ lengths. Then in his final start of 2020, Golden Pal lasted to win the Breeders’ Cup Juvenile Turf Sprint by 3/4 of a length over a closing Cowan in second.

This week, Golden Pal is the favorite in the Breeders’ Cup Turf Sprint.

Kimari did blow out the field in her career debut, which came in April 2019 at Keeneland in a 4 1/2-furlong maiden dirt sprint. Kimari won by an unbelievable 15 lengths. Once again, this is a difficult margin to achieve in sprint races because of the short amount of time, even if the race is on dirt.

Similar to Love Reigns this year, Kimari then went overseas for the Queen Mary Stakes (G2) at the Royal Ascot meeting and lost. But Kimari lost by only a head to Raffle Prize, with a length back to the third-place Final Song.

Kimari came back to North America in strong form with a four-length win in the Bolton Landing at Saratoga.

Unlike Love Reigns and Golden Pal, Kimari had an extra prep race at Keeneland when she won the Indian Summer Stakes over males. She then flew to Santa Anita and closed for fourth in the 2019 Juvenile Turf Sprint.

Now a dirt sprinter, Kimari is one of the main contenders for the Breeders’ Cup Sprint on Friday, although finding success against males on dirt is less common for fillies and mares. Nevertheless, the six-furlong distance suits Kimari.

Love Reigns has plenty of time left in her career. At this point, she is off to a great start with an April win at Keeneland and a graded-stakes win at Saratoga, with a good effort at the Royal Ascot meet in between those races. The pattern roughly resembles the early careers of Golden Pal and Kimari.

Whether she pulls off the Breeders’ Cup win this week or puts together a great season next year, it will not come as a surprise if Love Reigns is a big star soon. The raw talent is there to become a major name in the division.