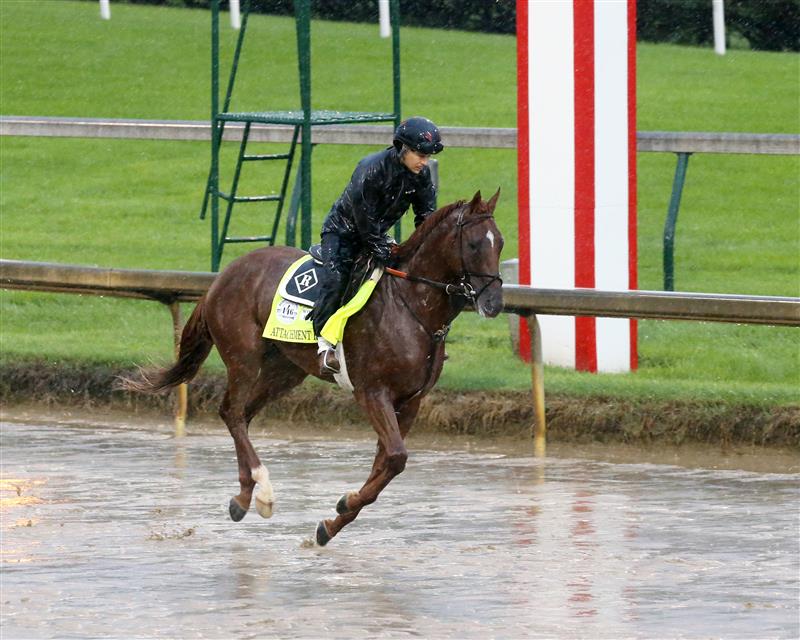 With only two days left, it is time to make a firm decision on some Kentucky Derby bets. The historic 1 ¼-mile race for 3-year-olds is scheduled for Saturday at Churchill Downs with a post time of 7:01 EST and features up to 18 horses.

The unknown status of King Guillermo (as of this writing) changes the original idea for this post. Even if he runs, relying on a horse with a minor issue two days before the Derby is not a great idea, at least not alone. He is still included on the ticket, but not as the backwheel key.

If he scratches, the expected pace scenario becomes even more moderate with one less pace challenger for the front-running Authentic.

Here is the selected horse to key underneath, and the final backwheel structure towards the end.

Attachment Rate enters this race off an improved effort in the Ellis Park Derby. He ran second by 3 ¼ lengths to Art Collector after stalking the pace in fourth and traveling wide on both turns. More importantly, Attachment Rate made the proper lead switch in the stretch run, which might give him a second wind in a 1 ¼-mile race.

For the runner-up effort, Attachment Rate shows a competitive 120 TimeformUS Speed Figure and 98 BRIS Speed Rating, both career-high numbers for him.

Four starts ago, Attachment Rate ran a promising second in the Unbridled Stakes at Gulfstream. After looming on the turn, the failure to switch leads possibly cost him the win against Dr Post. One race later, he did not switch leads again in the Matt Winn Stakes (G3) while running fourth and losing by five lengths to Maxfield, with Ny Traffic placing second.

Then in the Blue Grass Stakes (G2), he only ran fifth and 8 ½ lengths behind Art Collector, but he finally made the lead switch in the lane.

On paper, Attachment Rate is supposed to handle 1 ¼ miles. This is a Hard Spun colt out of an Afleet Alex mare named Aristra. Aristra is a half-sister to six-figure earners Database and Vespers, both routers in this careers. As for Hard Spun, he set the pace in the 2007 edition of the Kentucky Derby, before settling for second after Street Sense found a generous inside path to make a miraculous run and steal the win.

With the defection of Art Collector and possible scratch of King Guillermo, the current pace scenario favors the front half of the field.

Attachment Rate owns more speed than deep closers such as Major Fed or Max Player. His Post 13 neighbors Sole Volante and Winning Impression, who both want to settle farther back. Those two deep closers figure to relax at the break and give some breathing room to Attachment Rate. From that point, Attachment Rate is capable of sitting in eighth or ninth if he works out a good route to the first turn.

Trainer Dale Romans is no stranger to hitting the Derby board with a midpack horse, as evidenced by Dullahan’s third-place finish in 2012.

Plus, Attachment Rate is 50-1 on the morning line, though he may not be that high when the gates open. Considering he ran second to Art Collector at Ellis Park and went forward on speed figures, those are still value odds. Even if Attachment Rate goes down to 20-1, those odds are still roughly fair value. If the odds go less than 20-1, then he becomes an underlay.

While Attachment Rate can win with some luck and misfortune for the favorites, this horse is a better option to wheel underneath and hope he picks off tired horses in the lane for a small piece. It all depends on whether he can keep clear of traffic issues and get into a nice rhythm.

As explained in a previous post, the backwheel key is useful when three or more possible winners exist on top. The bettor can find a horse to rely on underneath and hope he “clunks” into the picture and hits the board at a longshot price. Attachment Rate's long odds offset the super-low price on Tiz the Law and somewhat low price on Honor A. P.

The win bet is still usable as a backup wager, especially with the TVG Money Back Special. Remember to "opt-in" for to enter the deal.

Good luck with all Derby wagers.