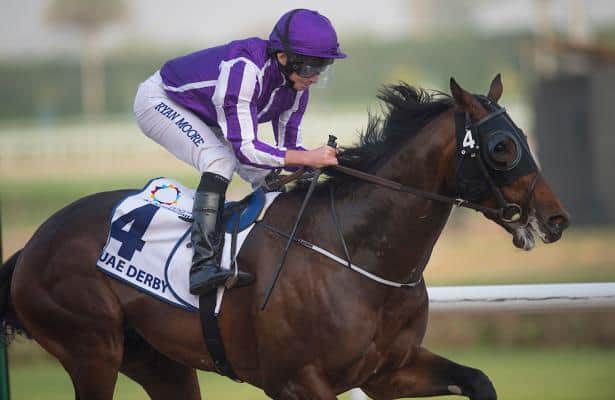 Mendelssohn will be a tough horse for bettors to figure out in the Dwyer Stakes (G3) on Saturday at Belmont Park. The race will be run at 1 1/16 miles on the main track, and will mark Mendelssohn’s first start since flopping in the Kentucky Derby.

From a form standpoint, the 3-year-old half-brother to Beholder is puzzling.

Mendelssohn started off 2018 with a win on Polytrack in Ireland over Threeandfourpence and stablemate Seahenge. Good enough.

Neither of those horses are that great, though, as Threeandfourpence lost his next four starts, including a last place finish in the UAE Derby (G2), and Seahenge went on to lose his next three races. The latter is entered in the Dwyer as well.

Then, Mendelssohn won the UAE Derby by 18 ½ lengths, and the connections were right to bring him to Churchill Downs off the smashing effort. Timeform (overseas) awarded him a 120. But to nitpick the race a little bit, jockey Ryan Moore rode him hard out of the gate in order to secure the lead and take advantage of the golden rail.

With the exception of Mind Your Biscuits, the Dubai World Cup card favored front runners to a severe degree, making it difficult to assess Mendelssohn’s victory.

Afterward, Mendelssohn went on to lose the Kentucky Derby by 73 lengths.

To be fair, Mendelssohn did encounter trouble at the start when Magnum Moon veered in, and a sloppy track made the footing difficult. A 20-horse field is never easy either, simply for traffic reasons. The Derby running line can probably be crossed out.

Then again, a critical handicapper can say Mendelssohn secured a reasonable position after the poor start. Also, the son of Scat Daddy faced a tougher field without the help of a golden rail, and maybe he was just exposed as average.

In defense of Mendelssohn again, this is the 2017 Breeders’ Cup Juvenile Turf champion, so it is hard to claim this is an average horse, at least not on turf.

As seen above, Mendelssohn is a hard, if not impossible, horse to handicap. But how do bettors approach him from a value standpoint?

Well, his value should be awful. This horse has had attention placed on him since he was born. Whenever a sibling of a famous horse appears, his career is watched.

Furthermore, he is 8/5 off a 73-length loss. In fact, he could go lower, as his gate troubles were immediately exaggerated after the Derby loss. Bias is a hard factor to overcome in racing, as some horses are lovable and too easy to root for.

Yet, despite his expected poor value, this still could be a very good horse on dirt. Not enough sample size exists at the moment, but he could turn into the kind of horse that will be a Breeders’ Cup Classic favorite. It is way too early to believe that, though.

What can we expect from Mendelssohn in the Dwyer Stakes? Hear from Aidan O'Brien himself ahead of Saturday's race at Belmont - live at 9.36pm on At The Races... pic.twitter.com/jhOeNCzYAB

Here is what Mendelssohn will face in the Dwyer:

He will most certainly run behind at least one horse, as Noble Indy will definitely be sent to the lead this time after the Belmont Stakes fiasco. The question is who will go with him.

The presence of Seahenge is interesting, as he sports the same exact connections as Mendelssohn, and has shown little talent on dirt so far. Is Seahenge going to be ridden hard out of the gate as a sacrifice for Mendelssohn?

It's tough to consider a horse that cost $750,000 is a rabbit, but in any race where the connections enter one contender and a hopeless runner, the latter is assumed as much. Seahenge does not appear to be an early speed horse though, so maybe not.

Maybe Mendelssohn could be ridden hard to help soften up Noble Indy for Seahenge? What a twist that would be. More realistically, the connections are giving Seahenge another shot on dirt, no matter if he failed before. He does possess the right bloodlines.

The TimeformUS Pace Projector believes Seven Trumpets, Rugbyman and Firenze Fire will be chasing Noble Indy, so Mendelssohn might be in fourth or fifth.

Can Mendelssohn handle the pace scenario and still kick in?

Yes, he can. Even if he does not like taking dirt in his face, which the Derby probably showed, he can still secure an outside position from the sixth slot and run in the clear, although wide. If he runs in the clear on a fast track, then there are no excuses.

That does not mean relying on Mendelssohn as a single in wagers is a good idea either. Especially not at 8/5. Yet, at the same time, he can win.

So this horse is a poor bet, at least as a single. The race could possibly be labeled as a "skip" race too, because even if bettors go against Mendelssohn, it is hard to feel confident knowing the ceiling is still high for this regally-bred horse.

There is just not enough data to conclude with confidence whether Mendelssohn will duplicate his Dubai effort this weekend, or flop again.