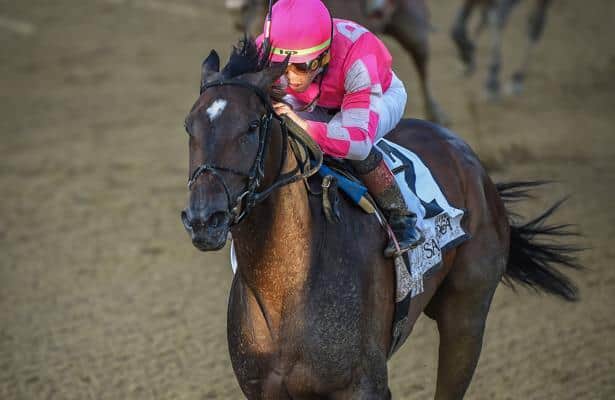 With the entries and post positions set, this analysis will focus on narrowing the $3 million Pegasus World Cup at Gulfstream to three horses. The nine-furlong race for older horses is scheduled for 5:44 p.m. ET Saturday.

Why three selections? The Pegasus seems more playable from a multi-race wager perspective, but the other races in the late Pick 4 are not easy. Using three horses is a nice compromise that leaves room in the other legs.

Earlier in the week, Jesus’ Team and Knicks Go were discussed in depth. While both horses made the cut, this list also will include Tax.

Admittedly, it took a while to come up with Tax. His poor effort in this race last year leaves pause for concern, as it came after a strong runner-up finish off a three-month layoff in the Discovery Stakes (G3) at Aqueduct with a 126 on TimeformUS.

This time around, Tax returned with another strong comeback effort in the local Harlan’s Holiday Stakes (G3). He secured the lead and finished strongly, winning by an easy 4 1/2 lengths over Eye of the Jedi with a 121 on TimeformUS.

Does history repeat itself, or does Tax move forward?

For one, he comes into this race showing three workouts after the Harlan’s Holiday Stakes, with the workouts spaced appropriately at seven or eight days apart. Regular intervals between works indicate a healthy horse.

As a second point, it is also nice to see Tax spend his time since November training and winning a prep race locally, rather than running over at Aqueduct in the Discovery first. Perhaps the extra local time helps.

Also, Luis Saez takes the mount for trainer Danny Gargan. According to TimeformUS, the Saez and Gargan combination is rated at a perfect 100. In addition, Gargan gets a 100 at Gulfstream while winning at 32 percent.

Nine furlongs is not a problem, as Tax won the 2019 Withers Stakes (G3) and Jim Dandy Stakes (G3). In the latter, he beat Tacitus and Global Campaign.

Tax is not a perfect horse, but he is the most likely winner.

Knicks Go is untrustworthy as a single, but he is not ignorable. With Sleepy Eyes Todd likely rating by trainer’s orders, there is a greater possibility that Knicks Go secures an uncontested lead, which he needs.

From a figure standpoint, Knicks Go stands out as well with a 129 TimeformUS Speed Figure for his Dirt Mile win and a 130 two starts ago in an optional claiming race at Keeneland. Only Mr Freeze rivals those numbers with his old form, but in terms of current form, Knicks Go is alone.

Knicks Go's lack of a nine-furlong win brings up the stamina question. The fact that his dam Kosmo’s Buddy ran as a turf sprinter does not help.

If singling a favorite, it helps to know the horse hits all the checkmarks, and Knicks Go misses the mark in the “proven at distance” category. However, he is usable defensively in the Pick 4 with other horses, with the preference that one of the other options beats him because of his status as the favorite.

Before that race, Jesus’ Team had defied expectations all year. Some of his campaign highlights include a third in the Jim Dandy Stakes (G2), another third in the Preakness and a runner-up finish in the Breeders’ Cup Dirt Mile.

In the Dirt Mile, Jesus’ Team finished in front of Sharp Samurai, Complexity, Owendale and Mr Freeze. Mr Freeze is entered in this race.

In the Claiming Crown, Jesus’ Team also displayed nice tactical speed. The ability to settle closer might come in handy if the pace ends up slow.

But if the pace is fast, he also is a proven closer who can move late.

Irad Ortiz Jr. taking the mount is another great sign. Why would Ortiz waste his time on a horse not set to fire? Top jockeys do not waste time often.

In fairness, Jesus’ Team needs to take a step forward in speed figures, and some of the lower-priced entries need bad luck on their side too. As a 4-year-old colt in January, though, another step forward is possible for Jesus' Team. Remember that most horses peak in their 4- or 5-year-old seasons.

Jesus' Team is the final inclusion in this writer’s Pick 4.