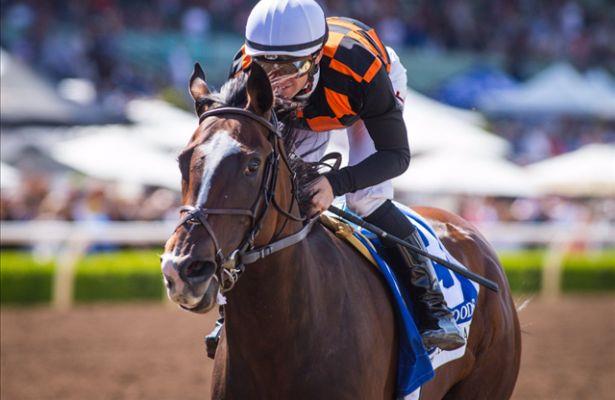 This edition of the Friday 5 focuses on a quintet of races on Saturday that look mostly like slow-paced events.

The lone exception is the Grade 2, $200,000 Santa Margarita Stakes featuring Paradise Woods, who is projected to lead through a moderate pace. Despite the 9-5 morning line price, there are sound reasons to bet her.

According to TimeformUS, the other four selections below are supposed to hit the front in their respective races through soft fractions, and that is always dangerous. It took some extra effort to find these races, but the work should pay off.

Confidence is high. If at least three of the five selections on this post do not win, I'll term it a disappointment. Consider this a warm-up for Derby week.

The popular mare lost her last two starts with a third in the Beholder Mile (G1) and fifth in the Santa Monica Stakes (G2), but she also failed to secure the lead in those two races. Paradise Woods is miles better when allowed to roll. When she stalks and needs to pass horses, she looks average.

This time, trainer John Shirreffs pairs her with Mike Smith. If there is one constant habit about Smith’s riding style, he lets quality speed horses utilize their speed. Sometimes he moves too early, but he never tugs back.

Smith is an excellent match for this speedy 5-year-old.

Also, Paradise Woods’ two losses at nine furlongs are forgivable. The first attempt came in the 2017 Kentucky Oaks on slop, and she set an absolutely suicidal pace. Her second nine-furlong race was the Breeders’ Cup Distaff later in the year, and she ran third, which was fine given the high class level.

Check out her monster April 8 work as well, which was designated as “breezing” even though she went four furlongs in a snappy 48 seconds flat at Santa Anita. Horses in California rarely receive the breezing label in their works.

Tale of E Dubai took them gate to wire last time at Penn National, winning an optional claimer by a half length with a 104 TimeformUS Speed Figure. Two starts back at Laurel Park, he set a fast pace on his own and finished second with a 107. If he repeats the 107 here, he will win the race with a nice morning line price of 7-2.

Three starts ago on Feb. 18 at Laurel, Tale of E Dubai did fade to sixth after setting the pace. But he also faced significant pressure from a good horse in Taco Supream, who went on to win that race and also an allowance race by nine lengths next time.

For those with a TimeformUS subscription, note how the second pace figure on Feb. 18 is marked in red, signifying Tale of E Dubai faced a fast pace.

With a projected uncontested lead in this spot, Tale of E Dubai is supposed to reserve enough energy to coast home. At 7/2, he is a great price as well.

Shakhimat comes out of the Shakertown Stakes (G3) at Keeneland, and that race was a little too short for him as he only made a mild move late for seventh. Not every pacesetter can secure the lead at shorter distances.

In this spot on synthetic, Shakhimat stretches back out to seven furlongs, which will give him a better chance to secure the lead at 5-2. Although Shakhimat faded on Feb. 24 when setting the pace at Gulfstream, that was a 1 1/16-mile route, and this one is an elongated sprint. On Jan. 6, he also faded quickly after contesting a fast pace in another route.

Last summer, though, Shakhimat held an uncontested lead through slow fractions in the one-mile King Edward Stakes (G2) on turf, and he finished a good second to Delta Prince. Delta Prince is known as a talented horse and recently took the Maker’s 46 Mile (G1) at Keeneland.

The King Edward effort is a better barometer of Shakhimat’s capabilities. He earned a 117 on TimeformUS, and a repeat of that number will win here.

Even though Burciaga faded sharply two times in a row since the claim last December, it does not look like he lost his previous form.

Under new trainer Steve Roubion, he competed in two fast-paced turf routes and ran decent to hold fifth in the more recent effort on March 26. The fast pace of those races made his form look bad, but he ran up to his usual standards if factoring pace.

Now Burciaga switches back to a six-furlong dirt sprint at 3-1. Before running on turf, he actually ran up a three-race win streak on dirt, albeit in routes.

But he does own good sprint experience, as he lost a six-furlong sprint by a neck in his career debut. He also finished second in his next sprint race.

The fact that TimeformUS' Pace Projector believes Burciaga will set the pace even though his recent races came in routes is a good sign, as it means his pace figures are high. Given those factors, he is the confident choice.

Out of the five selections here, this is admittedly my least confident one. His class falls a little suspect in comparison to the other top contenders in this spot.

But, this pacesetter is cutting back to a sprint after fading in the one-mile Overnight Stakes in late September. All of his sprint races last year were solid, as he won twice and finished second once out of three tries, while he lost all three routes.

Plus, on June 1 he beat one of the other contenders in this race, Guardian One.

With an uncontested lead and soft pace, he is supposed to run well at 6-1. There is a nagging feeling though that Dontkissntell and Gazing are classier.

Perhaps backwheeling McDove underneath Guardian One, Dontkissntell and Gazing is a better idea than relying on McDove to win. Use the win bet as a “saver” bet as an extra bet instead to cover the cost in case he wins.