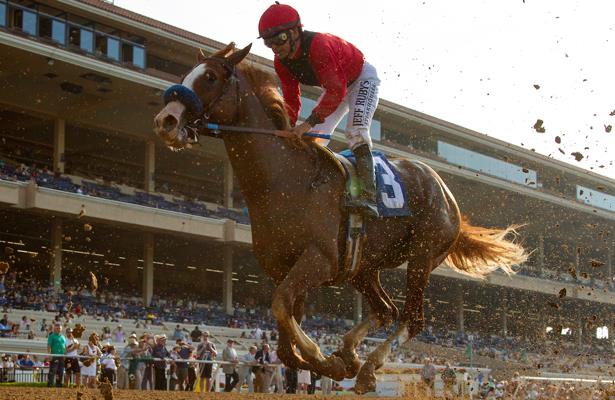 Once a year, the racing world focuses its eyes on Parx Racing as it showcases the Pennsylvania Derby (G1) and Cotillion Stakes (G1). Parx also offers a strong undercard, and one of the races bettors will enjoy is the Grade 2, $300,000 Gallant Bob Stakes for 3-year-old dirt sprinters.

With a plethora of front-runners lined up, it makes sense to choose a stalker or midpack type of horse, and preferably one cutting back in distance. So that's what leads off this weekly look at five horses to bet.

As evidenced by his 2-1 odds, King Jack owns the right form to win this race. He recently finished second to Improbable in the Shared Belief Stakes, earning a 119 TimeformUS Speed Figure. Prior to that, he broke his maiden at first asking at Santa Anita and also took a Del Mar optional claimer.

The loss to Improbable is fine, as Improbable brought his graded stakes experience to the race, while King Jack only made his third career start.

King Jack needed to follow the two pacesetters more closely rather than let them get away.

With Trophy Chaser, Strong Will, Bethlehem Road, Landeskog and Bulletin entered in this race, this front half is loaded with speed. Cutting back to six furlongs off the one-mile Shared Belief means King Jack should settle around mid-pack.

King Jack works as a single, but bettors wanting a longshot might also consider Strong Will, who ran a 116 TimeformUS Speed Figure last time.

The 4-year-old gelding Midnightcharly shows the most consistent TimeformUS Speed Figures in this race, yet he is 8-1.

Furthermore, Midnightcharly has been running against good horses.

In the Bensalem Stakes, Midnightcharly finished fourth to Engage, with other known names in Bon Raison and Laki placing second and third.

Two starts ago in the Banjo Picker Sprint Stakes, Midnightcharly ironically lost by a neck to Midtowncharlybrown, who is also a decent sprinter.

Again, perhaps there is something wrong in Midnightcharly's Beyer Speed Figures. The morning line oddsmaker is not always right either.

Based on TimeformUS numbers, though, Midnightcharly is a great choice.

In this maiden race for 3-year-olds and older, the Todd Pletcher-trained En Wye Cee is the 3/5 favorite, while his stablemate Patagonia 9/2 on the morning line.

On paper, the two are similar, as En Wye Cee earned a 105 on TimeformUS, while Patagonia ran a 102.

Of course, the difference is that En Eye Cee broke his maiden at Saratoga, and Patagonia won his race at Monmouth by disqualification.

But sometimes Pletcher uses Monmouth to give his horses a learning experience before bringing them over to a top-tier track.

The pedigree is there for Patagonia to stretch out, too. Notice his half-sister Lantiz ran in 22 races, and 21 of them came in routes.

As long as Patagonia remains the second choice or higher, he is the choice.

Valedictorian gets the nod in this spot because she possesses some quality and TimeformUS projects her to lead uncontested through a soft pace.

If Joe Bravo sends Valedictorian to the lead, she can win.

With Covfefe present as a towering favorite, this might look like a crazy selection. But Istan Council owns two wins and two seconds in her last four starts.

The consistent form started on April 26, when Istan Council overcame a Keeneland speed bias to finish a close second by ¾ of a length in an optional claimer. Next, she ran second in a Churchill Downs optional claimer.

Istan Council the won a June 22 optional claimer at Churchill Downs over Free Cover, who went on to win at Ellis Park by six lengths.

In her most recent start, Istan Council also traveled to Ellis Park and won another optional claimer by 10 ¾ lengths, with a career-best 113 TimeformUS Speed Figure. She is growing into her best form.

Then again, Covfefe earned a 125 in her Test Stakes (G1) victory.

Istan Council is feeling well, though. If the bridge jumpers come out and unload on Covfefe in the show pool, Istan Council might be worth a show bet, just in case Covfefe finishes off the board for any reason.