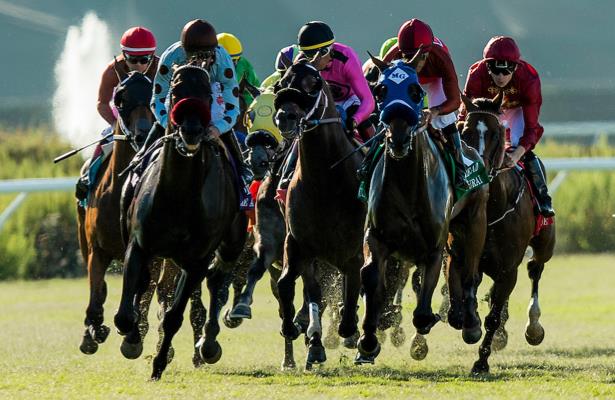 Because several racetracks including Saratoga canceled their Saturday cards, the options are limited in this week's column designed to isolate five likely winners.

But Del Mar will run as scheduled, and we'll start there with the Grade 2, $200,000 San Clemente Stakes for 3-year-old fillies on turf. The top selection will demonstrate why reviewing video is important.

On paper, Over Emphasize does not look any better than these fillies. She recently ran third by 2 ¼ lengths in Honeymoon Stakes (G3).

But watch her run at the top of the stretch, where she attempts to tip out. Over Emphasize gets shut off when Maxim Rate comes in slightly and traps her, causing Over Emphasize to lose momentum.

Two starts ago, Over Emphasize finished second by a length to a good filly in Colonial Creed when competing in an optional claimer. She also broke her maiden at one mile three starts back, and this race runs at one mile as well.

Over Emphasize's closing style is helped by the pace setup, too, as the sprinter Stillwater Cove and few others will make for a fast tempo.

At 8-1, Over Emphasize offers fair odds.

This allowance race contains a money burner in American Anthem, who finished fourth in the Triple Bend Stakes (G2) and second in a Churchill Downs optional claimer. It is better to look elsewhere.

Even though this is a five-horse field, the pace appears fast at first glance with every horse capable of showing tactical speed or more. American Pastime and Adens Dream may pressure American Anthem in the initial stages, while Flagstaff and Lombo are projected to sit a few lengths off the lead.

Flagstaff is preferred, as he recently won a Santa Anita optional claimer on May 4 over Candy Cornell. Candy Cornell ran the best race of his career just days ago when he made a bold move to challenge the promising King Jack before inevitably giving in late to him. But, the effort gives hope that Flagstaff beat a quality horse, and that Flagstaff will fire in this spot.

Flagstaff’s connections are the familiar John Sadler and Hronis Racing. Expect him to sit about two lengths off the lead and pounce.

Pure Xena is a first-time starter trained by Brian Koriner who cost $370,000 only three months ago at one of the OBS sales. Access to video of her workouts via XBTV is a bonus.

In the May 31 clip, Pure Xena runs outside of an unnamed stablemate and needs a strong hold just to make sure the workmate can keep pace early. On the turn, it looks like Pure Xena wants to blow by, but the finish between them is kept close on purpose.

On June 7, Pure Xena easily disposes of Desert Swarm by several lengths under mild urging. In this one, they let Pure Xena run.

On June 29, Pure Xena finally runs with a modestly talented workmate in Liberalism, and she retains her advantage early and draws clear. Liberalism went on to finish second in a Cal-bred maiden race at Del Mar.

Needless to say, Pure Xena is ready to run.


Again, the pickings are slim with the cancellation of Saratoga and other tracks.

TimeformUS calls for a fast pace in this exciting Derby, with the familiar Walker Stalker and other set to compromise their chances on the lead.

There are only two closers in this race: Pasamonte Man and Vangilder.

Vangilder is preferred because he brings new blood to this New Mexico group as a shipper from Lone Star Park. In his first start for trainer Steve Asmussen, he won a one-mile allowance race by five lengths with a 99 on TimeformUS. If Vangilder repeats the same May 12 speed figure, he can win.


Inclusive finished fifth by 2 ¼ lengths in the local Charlie Barley Stakes, but the loss is a blessing in disguise as it will help his value in this spot.

In the Charlie Barley, Inclusive probably needed a bit more pace as Inventing Blame got away with a comfortable lead and almost took the field gate to wire. Eventually, The Black Album did mow him down.

Once Inclusive got in the clear, notice how strongly he finished in the last few strides. He kept pace with the leading group all the way until the end.

Further back in his form, Inclusive also shows two different runner-up finishes to Sir Winston over synthetic. Inclusive ran fifth in the Grey Stakes (G3) as well, but that race is forgivable as he got shut off on the inside when trying to make his move.

He needs pace and the longer distance will help. At 6-1, Inclusive is fair.

Mighty Heart takes Triple Crown step in a wet Prince of Wales
Rain is in the forecast for Tuesday's running of t...

Preakness Odds & Analysis: Who can beat Authentic?
Earlier this month, Authentic took control of the...

First Look: Keeneland's 8 key Breeders' Cup preps
This weekend is what dreams are made of for racing...