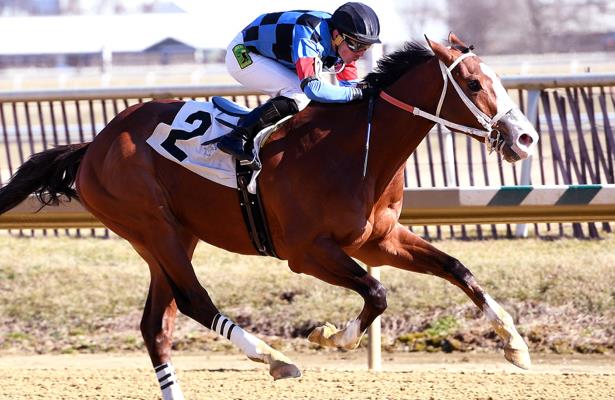 Ever hear the story of the man at the OTB who studied handicapping all his life and the newcomer who arrived built only to build a quick hot streak? The more experienced player could not believe the beginner's luck.

Since the longtime bettor stuck with sound handicapping techniques, though, he kept coming back, while the quick-starting beginner eventually quit because he had no understanding of what brought him incredible luck in the first place.

At least that's how the story is supposed to work. So, here's a question I've been asking myself: Would the experienced player side with a maiden winner in a Grade 2 race?

After a sizzling 15 ½-length win in his first start, Hoffa’s Union makes his graded stakes debut in the Grade 2, $750,000 Wood Memorial Stakes at Aqueduct. In this first edition of the Friday 5 -- selections for weekend races in which I'm feeling a high degree of confidence -- the undercard Bay Shore Stakes (G3) deserves a mention along with a trio of races at Keeneland.

The Wood's expected fast pace scenario works against him, but the rest of the field is unattractive enough to take a chance on him anyway. Who else could win this?

Haikal is probably a one-turn sprinter/miler. Tacitus is underlaid if he sticks to his 5-2 morning line. Outshine had every chance to beat Tacitus in the Tampa Bay Derby (G2).

Admittedly, Tax shows no real weaknesses. His morning line of 9-2 is questionable, however, given he is the only entry here with a nine-furlong win.

Hoffa’s Union gained new connections after his maiden win, and they paid big money and send this gelding to trainer Mark Casse for a reason.

From the five selections on this post, this is the most likely winner. In fact, if he does not win by a clear margin, it will come as a disappointment.

In the Gotham Stakes (G3), Much Better put up monstrous pace figures of 158, 156 and 133 on the TimformUS scale. He went so fast that Grade 1 Knicks Go eventually ended up 51 lengths behind.

Yes, Mind Control finished ahead of Much Better in the same race, but he benefited from the suicidal pace scenario, and the same situation is not probable.

In this spot, Much Better cuts back from one mile to seven furlongs and faces a soft pace. TimeformUS even marks the race as blue (for slow) in the Pace Projector. Trainer Bob Baffert is unlikely to tinker with Much Better’s running style. He will show speed.

Much Better could blitz this field with an open-lengths win. At 9-5, his odds are more than fair, although it is possible he may get hammered down to less than even money.

For a 15-1 shot, this horse shows some consistently solid speed figures, ranging around 105 to 115 on the TimeformUS scale for the most part. He owns back class, too, as the runner-up in the 2017 Woody Stephens (G2) and Jim Dandy Stakes (G2).

His best running comes in a one-turn sprint, something he has not tried since that good Woody Stephens effort. In his longer races, notice how he loses ground from the far turn to the finish.

Trainer Nick Zito is no win machine, but he has this horse in a great spot and the work tab off the layoff is showing fast times with one noticeable bullet on March 25.

If Giuseppe the Great stays at 15-1, that is great value.

In this race, the odds maker is likely incorrect in making Copper Town 5-1. Amazingly, that horse has never started higher than 2-1 in his seven-race career.

If that point is true, then it will help the value hold on other horses, including the morning line favorite Limousine Liberal at 3-1.

Most people do not think of 3-1 as “value,” but it all depends on what the bettor is getting in exchange for eating lower odds. In this case, Limousine Liberal is a multiple Grade 2 winner who only lost the Phoenix Stakes (G2) by a half-length on this course last fall. Then, he finished mild fifth in the Breeders’ Cup Sprint against the division's best.

Furthermore, TimeformUS' Pace Projector believes the race will set up for Limousine Liberal’s closing kick. If he cuts through the traffic, he should prove tough to hold off late.

This 15-1 shot made a nice move in the Honeybee (G3) when trying to mow down the talented Motion Emotion. She only hung a bit in the stretch after the fast pace and settled for third, while the closer Chocolate Kisses took advantage for the win.

Bizwhacks earned a 105 TimeformUS Speed Figure for the effort, which is a competitive number against this field. Only Chocolate Kisses received a faster number in her most recent start with a 106. Surprisingly, the rest of the field scored figures in the 90s last time out.

The Breeders’ Cup Juvenile Fillies champion Jaywalk is in this spot, but she threw in a clunker in the Davona Dale Stakes (G2) and missed the top three. Perhaps John Servis undertrained her heading into that race, and now she is ready.

But not every 2-year-old sensation makes a smooth progression to its 3-year-old campaign. Some of them hit their peak too early and never progress.

If Jaywalk throws another clunker, the race is wide open, and Bizwhacks does not look worse than any of these contenders. She is usable on top or underneath.