Friday 5: Got Stormy can upset Belmont's Just a Game Stakes 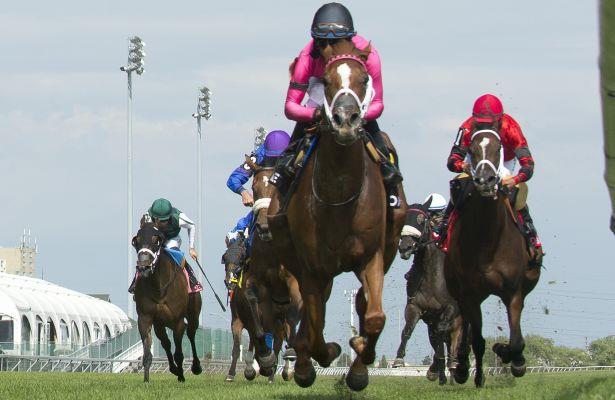 Certain horses take on an aura of invincibility, and for bettors that is a great thing as the public will be caught off guard when there's an upset.

In the Grade 1, $700,000 Just a Game on the Saturday Belmont Stakes undercard, the 4-year-old filly Rushing Fall is one of those horses who most assume will dominate every time. With the exception of the 2017 Breeders’ Cup Juvenile Turf Fillies, she has never started higher than 9-5. Take away her maiden race, and her highest price was 6-5.

But Rushing Fall is not incapable of losing, as Toinette showed in the Edgewood Stakes (G3) last year. I think she could drop another race this weekend, too..

Other than the Just a Game, I'll cover the Ogden Phipps (G1) and Woody Stephens (G2) on the same undercard, the Woodbine Oaks in Canada, and in case anyone wants to keep betting, a race at Emerald Downs when running down Saturday's top selections.


Got Stormy lost to Rushing Fall in the Jenny Wiley Stakes (G1) at Keeneland in April, but there are a few notes to point about the race.

Rushing Fall got away with a slow pace and uncontested lead. One clue on the first point is that TimeformUS marked the six-furlong fraction in blue.

It's noticeable from the replay as well how slow they went.

The field let Rushing Fall get away with a 48.41-second half mile uncontested, and that is why she won. It is too difficult to mow down a talented filly left alone.

Got Stormy made a nice move on the far turn and almost looked like she would blow by Rushing Fall. But she got sloppy with her footwork.

The 1 1/16-mile distance possibly wore out Got Stormy, causing her to switch to the wrong lead out of fatigue. She fits a lot better at Saturday's one-mile distance, as she showed with a strong second in the Churchill Distaff Turf Mile (G2). In fact, all five of Got Stormy’s career wins came at one mile.

Got Stormy deserves one more chance at a nice price, listed 6-1 on the morning line.


I'm no fan of Come Dancing and her inflated speed figures. At one point, she earned a 119 TimeformUS Speed Figure for the Distaff Handicap (G3), and somehow it rose to 134. On Beyer, she earned a 114, best of any horse this season. Just disregard those controversial numbers.

The right alternative is Escape Clause, who comes into this race with enough speed to press Come Dancing and the will to win, as she showed in the Apple Blossom Handicap (G1). Escape Clause narrowly lost to Midnight Bisou, but she fought hard the entire stretch.

As good as Midnight Bisou is, she needed an all-out effort to nose out Escape Clause. She also benefited from Wonder Gadot's go-for-broke tactics.

The longer distance works in Escape Clause’s favor, as Come Dancing’s big wins came at seven furlongs and one mile. At 9-2, Escape Clause is the choice to strike first and win, with Midnight Bisou's presence respected as well.


Honest Mischief received plenty of attention for his eight-length maiden win at Keeneland. There is reason to believe the hype matches his ability.

From a time standpoint, Honest Mischief finished the seven furlongs in 1:22.43. Four races later in the Commonwealth Stakes (G3), Bobby’s Wicked One won and finished the same distance in 1:22.80.

Another plus is the fact Honest Mischief does not need the lead, as Landeskog, Much Better and Complexity are set to duel each other into oblivion up front. At 6-1, Honest Mischief is a great value.


Preferred Guest only owns one win, but she runs like nine furlongs will suit her perfectly.

For example, look at this filly’s 2018 campaign. She lost her first three races at sprint distances before starting in the 1 1/16-mile South Ocean Stakes and winning. All of those races came at Woodbine for trainer Mark Casse.

Casse then took her to Gulfstream, where she ran a mild fifth in a one-mile turf race with no pace. TimeformUS marked the middle fractions in blue.

When she returned to Woodbine in a seven-furlong starter allowance, she ran evenly again for third before improving to a close second in the Selene Stakes (G3) at 1 1/16 miles. She even finished ahead of the favorite in here Bold Script.

Why did the oddsmaker list Preferred Guest at 10-1? That is an excellent value on a filly who wants to go long.


It's always fun to play Emerald Downs on a Saturday night. In this specific race, there are three main speed horses in McDove, Beau Rocket and Judicial.

The right horse to choose is Fly Far Away, who's 6-1 and recently finished a closing fourth against a couple of these in a May 19 optional claimer.

Fly Far Away got no pace to close into, as the initial 1-2-3 horses kept the 1-2-3 spots, with only the second and third horses switching positions.

Trainer Blaine Wright hits at a 24% clip at Emerald, and this mare also makes her third start off the bench too, which is one of the oldest angles out there.

In case the day doesn't go well at Belmont, get some of it back playing this one later at Emerald Downs.